Up, up and away with new TWA Hotel

I was lucky enough to spend the night at the JFK terminal in New York on opening night at the newly restored TWA Hotel.

The TWA Flight Center at John F. Kennedy International Airport in New York City was designed by Finnish-born architect Eero Saarinen.  This iconic jet-age structure was his final project, commissioned in 1956, and opened after his death in 1962.

Writing about the building, Philip Kennicott, art and architecture critic for the Washington Post, stated: “Saarinen’s concrete structure, with its soaring, winglike vaulted roof, its huge fields of glass, and its thrilling interior curves, cantilevers and airy mezzanines, is one of the great buildings of the past century.”

Unfortunately, the Flight Center was designed for use with smaller jets, and within a decade, it was mostly obsolete.

By the time TWA went out of business in 2001, the terminal had significant operational and capacity deficiencies that led the Port Authority of New York and New Jersey to propose replacing the historic structure.

The importance of Saarinen’s building was recognized in 1994 when the terminal was named a New York City Landmark & New York City Interior Landmark.  In 2005, it was placed on the National Register of Historic Places.

For more than two decades, preservationists, architects, and elected officials worked to protect Saarinen’s midcentury icon, while also finding a new use for it.  In 2015, MCR development won the bid to develop the property.  The cost of renovating Saarinen’s building and construction on the new hotel, including the addition of two seven-story wings constructed to bracket the terminal, was $265 million.

While I was reading about the hotel on its website, I noticed a name familiar to Hagley.  The new restaurant, the Paris Café and Lisbon Lounge, run by chef Jean-Georges Vongerichten, “encompassed the entire footprint of the terminal’s original Paris Café and Lisbon Lounge. The spaces were originally outfitted by famed Parisian industrial designer Raymond Loewy — the mind behind the 1955 Coca-Cola contour bottle, the 1959 TWA twin globes logo, the 1963 Studebaker Avanti and the 1962 Air Force One livery.”

In May 2001 Hagley Museum and Library acquired a collection of Raymond Loewy papers and photographs that document his life and career.  I was excited to see what our archives contained related to TWA.

Raymond Loewy was hired by TWA to create a new and consistent corporate look. In 1959 he designed TWA’s twin globe logo, an updated look for all ticket offices, and the color scheme for the ground vehicles.

Along with fashion designer Don Loper, he also styled the new hostess uniforms.   Loewy analyzed the movements of the women to find out what kind of clothing was most suited to their work. 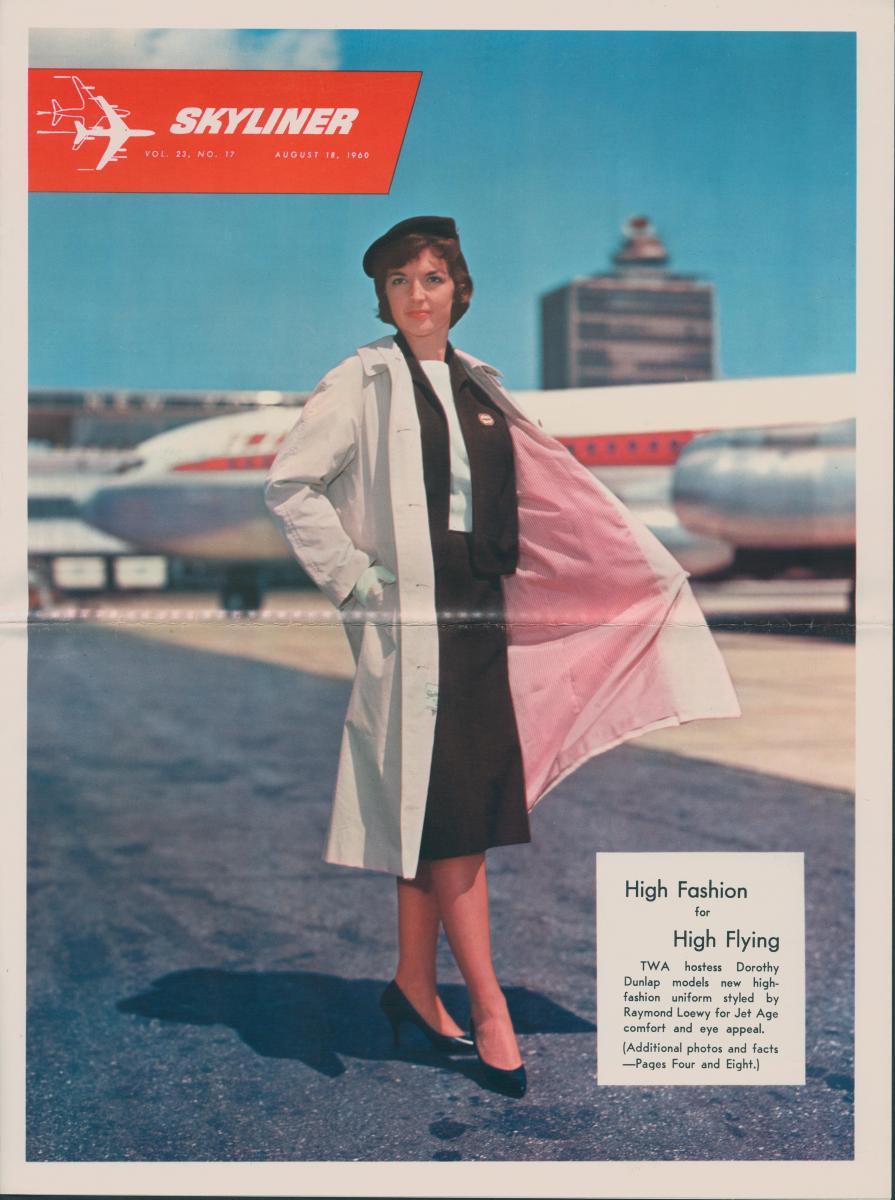 TWA also gave Loewy the task of designing the food service areas within Saarinen’s terminal.  An article in the New York Journal-American May 22, 1962 described the project:

“Accenting in décor and cuisine the international theme of the new Trans World Flight Center at the New York International Airport, the three Savarin operated restaurants and snack bar reflect the atmosphere of the many world centers served by T. W. A.  There’s the Lisbon Lounge, the London Club and the Paris Café.  The snack bar opening on May 28 has an Italian Motif.

Designed by Raymond Loewy/William Snaith Inc., the restaurants take full advantage of the sweeping panoramic view of the airfield through the tinted, heat-resistant glass walls.”

It was really thrilling to walk into the refurbished space on opening day and sit in the chili pepper red seats of the Sunken Lounge, listen to the sound of the split flap departures board, and order a retro cocktail. With the “Beatles” singing on the walkway above us, accompanied by dancers in vintage TWA uniforms, we really felt like we were caught in a time capsule of the 1960s.  Along with other excited visitors, former TWA hostesses and pilots among them, we enjoyed the small exhibits throughout the terminal as we explored all corners of the renovated space, including the new Paris Café.

If your travels take you through New York, I recommend taking the time to wander through the jet-age past at the TWA Hotel.

Linda Gross is a Reference Librarian at Hagley Museum and Library.​