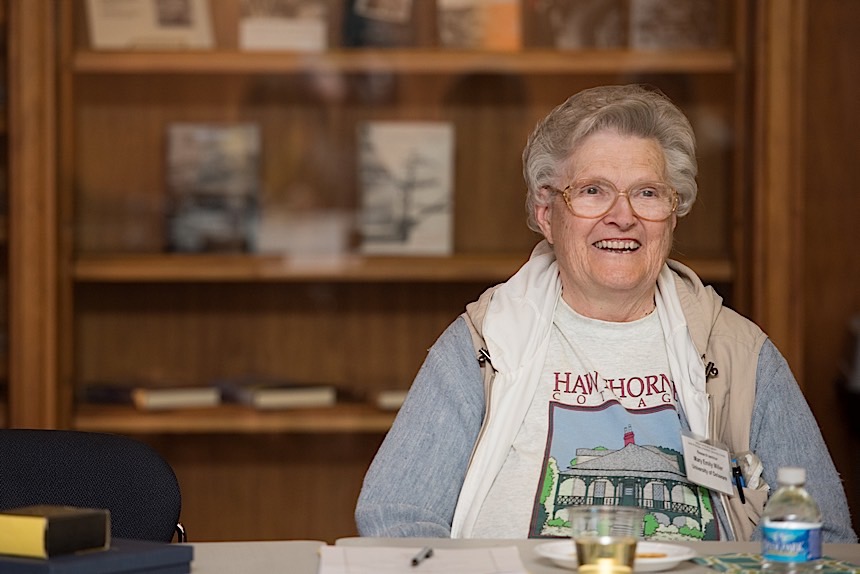 A longtime friend of the Hagley Library, Mary Emily Miller passed away suddenly on April 18, 2015. She had just turned 81, and been honored at the March 26 Hagley Research Seminar for her regular participation in our events for a quarter-century.

Mary Emily was a person who spoke her mind, did what she wanted to do – and what she did always amazed those who came to know, respect, and admire her. She was born on the family farm near Frederica, Delaware, a property recognized as a tri-centennial farm continuously owned and operated by the same family since 1684. Mary Emily earned her B.A. with a Distinction in History from the University of Delaware in 1955, and then a certificate in Business Administration from Harvard-Radcliff in 1956. She then spent several years as the Dean of Women at Methodist University in North Carolina, while also enrolled in the doctoral program in history at Boston University.

Her dissertation would become a foundational work in environmental and economic history. Her study, The Delaware Oyster Industry, Past and Present, dove deep into personal papers, historical periodicals, and scientific literature to cover the consumption and harvesting of oysters from the colonial era until 1960. Among her sources were the account books of the du Pont family, held at that time by the Eleutherian Mills Historical Library, now known as the Hagley Library, which showed prices and purchasing practices in the 1830s and 1840s. She also conducted extensive oral interviews with baymen and others active in the oyster industry. Cited extensively over the years by those studying estuary economies and ecologies, the dissertation also became a source for federal court decision that halted New Jersey’s efforts to build a liquefied natural gas terminal extending over sea beds that were part of Delaware.

After receiving her doctorate in 1962, Mary Emily took a position as Assistant Professor of History at Park University in Missouri before moving to Salem College (now Salem University) in Massachusetts, where she taught from 1966 until 1992. Upon “retiring” she moved back to the family farm in Frederica, continued teaching through the University of Delaware downstate campuses, and became involved an extraordinary range of organizations and activities. Among these she spent nine years on the board of the Delaware Agricultural Museum, many years as an active volunteer for the Kalmar Nyckel Foundation, state chair of the American History Essay Competition of the Daughters of the American Revolution, and involvement in the Frederica Historical Society, Friends of Delaware Archives, and the New Sweden Center.

Every Christmas Mary would distribute a four page typed report on her activities over the past year, with the single-spaced text stretching almost to the edge of the paper. In it she would comment free-form on important anniversaries (“It was 50 years ago in November 2013 that JFK was killed. Dr. Who is 50”). Mary also would recount her extraordinary travelling: a trip the Outer Banks that included visiting Ocracoke Island where she “got some sand dollars on the beach;” celebrating “Peggy Fleming’s birthday in Milford at ShangHay Rest[aurant];” visiting Boston to watch the Charles Morgan, “last wooden US whaling ship” sale into the harbor, and then also taking in the Peabody-Essex museum for the Joseph Mallord William Turner exhibit, commenting, “I really like his scene of the Grand Canal in Venice, reminding me of the Caneletto scenes;” and going to the Society for the History of Discoveries meeting in Austin, Texas (an organization she had participated in for a half-century), where she saw an exhibit featuring the La Belle (a ship that sank in Matagorda Bay Texas in 1688) followed by a stop in San Antonio to experience the Riverwalk.

Mary Emily received many awards for her energy and accomplishments, including the Longevity Award from the Small Business Development Bureau that was co-sponsored by the University of Delaware, and induction into the Delaware Maritime Hall of Fame. In June of this year she would have been recognized for 50-years as a member of the American Association of University Professors.

Throughout, Mary Emily was a keen observer of the world. Noting that it was 25 years since the Berlin Wall fell, she added, “I was there in 1962 as it was being built and never did I think I would live to see it come down.” And observing that the Civil Rights Act was 50 years old, she felt a need to affirm, “still a long way to go.”

We at Hagley will miss Mary Emily Miller, but are thankful that she included us in her agenda, and her energies.

Roger Horowitz is the Director, Center for the History of Business, Technology, and Society at Hagley.