One of the most consequential developments in the resurgence of conservatism in the United States from the late 1960s through the 1980s was the New Right’s success in rallying white middle-class women to its cause. As several historians have argued, the Right’s mobilization of white middle-class women produced a powerful grassroots network of activists. How these women helped advance conservative political goals remains an important question for historians and other analysts of the conservative revival.

The papers of the National Association of Manufacturers (NAM), which I researched during a 2014 residence at the Hagley Museum and Library as a H. B. DuPont Fellow, provide important insights into the influence of women in the resurgent conservative movement. NAM gained national prominence from the Depression through the early postwar era when it waged a now well-known crusade to promote free enterprise and challenge the New Deal’s labor-friendly stance. No less consequential, however, were its activities in the 1960s and 1970s, including its efforts recruit women to its cause. Hoping to broaden its influence and revise its male-dominated image, NAM devoted increasing energies to its Women’s Department. Founded during World War II, the Department became a robust medium for conservative activism, attracting thousands of members from the early 1960s onward. From coast to coast, NAM’s women members orchestrated film screenings, discussion groups, business luncheons, and voter registration drives, each of which NAM believed would be useful in furthering its pro-business mission.

While the Women’s Department was primarily a mechanism for advancing NAM’s larger goals, it also became a powerful force in and of itself, one that not only brought women into NAM’s ranks as disciples of free enterprise, but also energized the conservative movement through its network of activists. The Department was a highly motivational community that thrived by promoting feelings of belonging and status. As illustrated by its internal literature and publicity materials (figs. 1-3), the Department envisioned a community of civically-engaged and empowered women working together to further an array of conservative causes including business leadership, family-centered values, youth morality, and campaigns to weaken labor unions and communism (which NAM regarded as two sides of the same coin).

The Department’s vision of women was premised on two recurrent themes. On the one hand, it reinforced the patriarchal gender ideals familiar to postwar culture by casting women as natural guardians of family morality and managers of the home.

Yet the independent and ambitious women who made up the Department’s leadership also believed that women would be more effective in advancing NAM’s goals if they became active participants in civic life. Deploying the phrase “womanpower”—a term more typically associated with the Women’s Movement—the Department’s officials portrayed NAM’s women activists as an empowered community of free enterprise advocates. By encouraging women to organize film screenings, give speeches in their neighborhoods, and network with other women’s organizations to combat the supposed threats to the “American Way” posed by labor unions and communism, the Department offered women possibilities for greater participation in the civic sphere and entrée into the resurgent conservative movement. 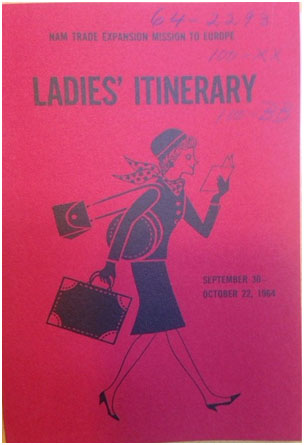 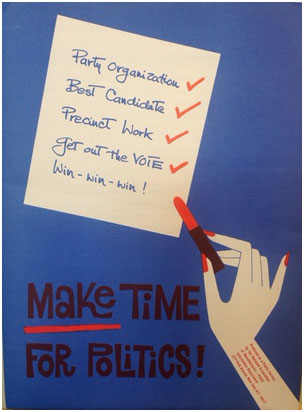 In an era when the burgeoning feminist movement was calling attention to the subordination of women, the Department’s activities provided useful fodder for NAM’s efforts to recast itself as an organization committed to expanding women’s freedoms. By adapting rhetoric about female independence to pro-business and conservative ideals, the Department thus helped NAM to portray itself as a progressive institution even as it continued its crusade against New Deal liberalism, the labor movement, and the campaigns for equal rights and equal pay for women.

David A. Gray is a Visiting Assistant Professor in American Studies at Oklahoma State University.