The Time Has Come to Talk of Many Things - Of Robin Hood and Ovals, Cycles and Elliptical Rings 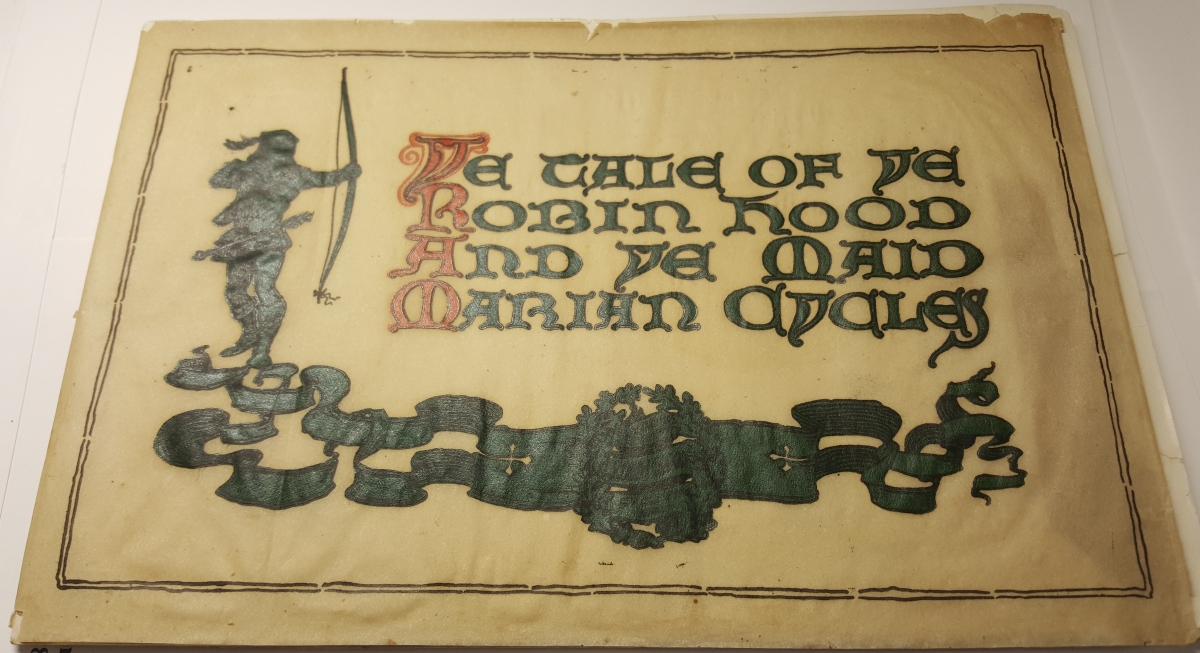 The object pictured above turned out to have some surprising historical connections. This fancifully illustrated trade catalog was made to showcase Robin Hood bicycles made in Wilmington, Delaware by the McDaniel & Merrihew Cycle Manufacturing Company. The catalog was printed sometime around 1900. I was asked to have a look at the cover decoration to identify the printing method. The image on the cover has three colors, and with the aid of some magnification it is possible to see the ink “squash” of a relief print method (such as a woodblock, letterpress, or stamp). Three blocks were used, and each color was printed separately. With these methods, the inked area of the plate or block is raised (in relief). When pressure is applied during printing, ink is squeezed to the outer edges of the design, leaving a slightly thicker ink outline. You may observe this when making crafts with rubber stamps or potato prints. 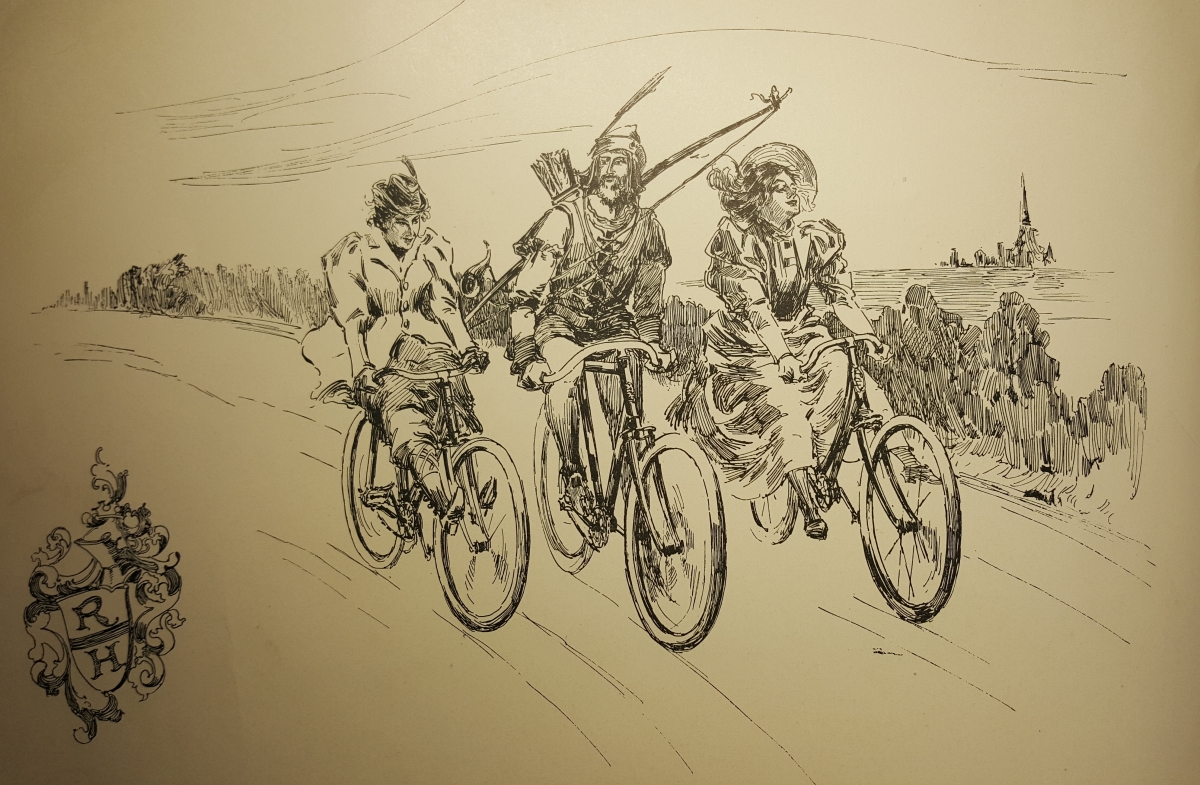 One really interesting thing about the catalog is that the publisher is identified and his name is scattered throughout this booklet.  Photographs of bicycle models and featured components in this catalog are printed using the half-tone letterpress method.  In this method, the continuous tone of the photograph is mimicked with variously sized ink dots. The name Geo A. Wolf is printed beneath many of these photomechanical reproductions.  The back cover also reads “Designed and Printed by Geo A. Wolf, Wilmington, De.” 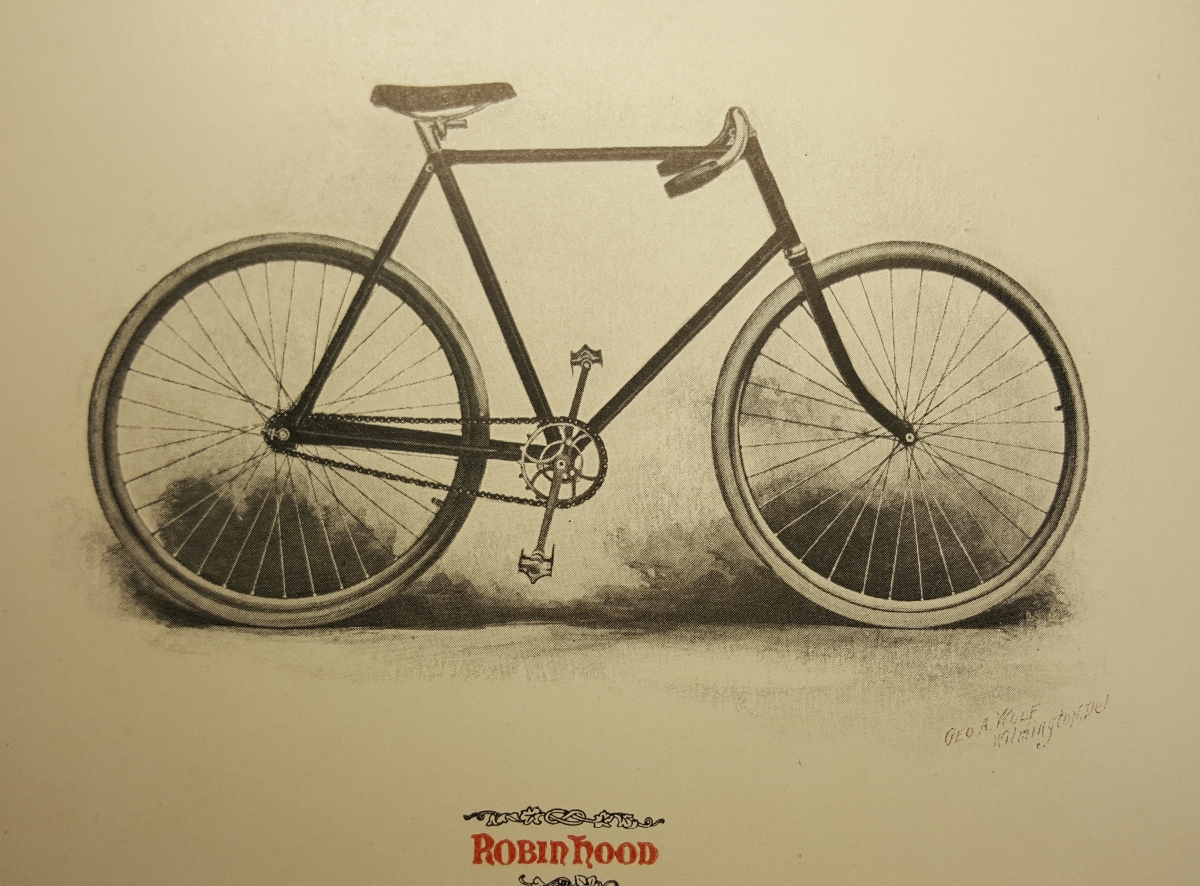 When I did a quick internet search on this fellow, I found a very nice article written by the Mill Creek Hundred History Blog.

You can read this yourself, but the basic gist is that Mr. Wolf was a prolific printer of postcard views of Delaware.  It also reveals that in 1906 Wolf designed the DuPont company oval-shaped logo, still in use today! When I read that fact I had to do some additional research at Hagley. Our files include a copy of a letter written by George Wolf, recalling the time when he was commissioned to design the DuPont insignia.

Looking through the Wilmington City Directories of the first decade or so of the 1900s, Wolf is listed and gradually makes his way from designer, to printer, to publisher, then disappears from the scene around 1911. The directories also have advertisements for bicycles from the Merrihew Company, who sold the Robin Hood bikes.

Yet another strange but fascinating connection was found when I asked our Published Collections Department what they might have on the DuPont oval. They provided me with a copy of an analysis entitled: My Treatise on the DuPont Oval, in 3 parts; and The DuPont Oval: A Historical Review. They were written in 1982 by Crawford Greenewalt (manager of the Manhattan Project for DuPont and president of DuPont Chemical Company from 1948-1962). He indicates that the oval was not trademarked until 1920, when it was registered under “granular and gelatinous explosives”. Even then, only the image of the insignia was trademarked, without any specific calculations on how to draw or enlarge the image. Greenewalt reveals that a standard for creating the oval was requested of the DuPont Engineering Department’s Subcommittee on Drafting Room Practice. The Trademark Division at that time (1948) must have been horrified to find that 45 versions of the oval had been used in labeling and advertising over the years. The subcommittee investigated a variety of ways to reproduce the logo faithfully, including the calculations necessary, and chose the one that was most easily reproducible and scalable. After some computer plotting of curves, and lessons in geometry, Greenewalt says that the oval is a “reasonable approximation of a true ellipse”. If you want to know what that means, go figure it out yourself!

Alternatively, you may request the Greenewalt paper at the Hagley Library. Be sure to consult the Mathematical Appendix – “For those who are mathematically inclined, the development of the formulas for the locus of intersections and the Du Pont approximation are given herewith…” I’m sure that these days it is much easier to do, utilizing photo editing software.

I also found two other items listed in our Published Collections, which were printed by Wolf:Ideal New Castle in the State of Delaware as it Appears in the Year 1899; and Industrial Wilmington / issued by authority of the Board of Trade, Wilmington, Del., U.S.A. ; designed, compiled and published by George A. Wolf, 1898.

These are all available for your perusal!