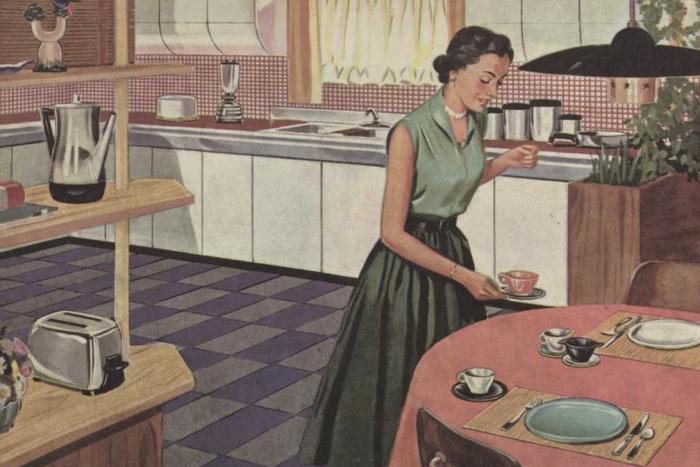 Domesticating Disability: The Creation of Assistive Devices for Disabled Homemakers in the Post-WWII U.S.

This analysis of gender, technology, and disability will explore the creation and implementation of assistive devices for disabled homemakers in the post-World War II United States. In the two decades following the war’s end, new government funding and institutional support facilitated the development of new technologies, such as wheeled tables, lightweight pots, adjustable shelves, and accessible aprons that aimed to assist disabled women carry out work inside of the home and to fulfill their socially-prescribed family roles as mothers and wives. Many of these devices were created as part of larger vocational rehabilitation efforts that enjoyed increasing support in this era. Although vocational rehabilitation had historically focused on male veterans and wage earners, it was gradually expanded to include homemakers amidst the postwar marriage boom and baby boom.

While the creation of assistive devices for homemakers and homemaker rehabilitation more generally bolstered postwar domesticity, middle-class gender roles, and able-bodied normalcy, it also posed new challenges to them. Homemaker rehabilitation not only included a recognition of the economic importance of homemaking but also a critique of its more ceremonious aspects that presaged later feminist arguments. At the same time, the development of assistive devices frequently drew on homemaking strategies already in use by people with disabilities, thereby forging connections to the independent living and disability rights movements that emerged in the late 1960 and early 1970s. Identifying these similarities reveals much not only about homemaker rehabilitation and the creation of assistive technologies for disabled women, but also how they intersected with and bolstered later social movements.

Laura Puaca is associate professor of history at Christopher Newport University, where she teaches courses on U.S. history, women’s and gender history, and the history of social movements. She is the author of Searching for Scientific Womanpower: Technocratic Feminism and the Politics of National Security, 1940-1980, which won the History of Science Society’s 2017 Margaret W. Rossiter History of Women in Science Prize. She is also the director of the program in Women’s and Gender Studies at CNU, as well as the Hampton Roads Oral History Project.

Jaipreet Virdi of the University of Delaware will provide introductory comments.

Attendees are encouraged to read Puaca's paper, “Domesticating Disability: The Creation of Assistive Devices for Disabled Homemakers in the Post-WWII U.S.,” which may be obtained by contacting Augusta Noah at anoah@hagley.org.