It's iconic and ionic ...ranging from literature on salt... 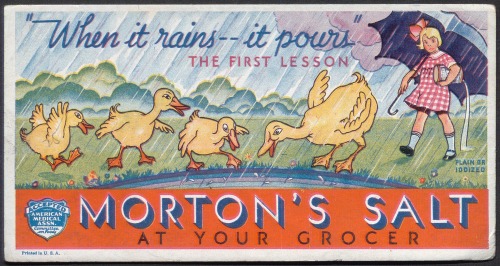 It's iconic and ionic u2026ranging from literature on salt mining totheses on halophilic enzymes, Hagley Library's Carol Litchfield collection on the history of salt(Accession2012.219) is one of the world'sgreatest resources on the subject of salt.

This advertising card is one of twenty-five in our Litchfield Collection created by Boston'sDonnelly Advertising Company for the Morton Salt Company between around 1916 to 1923.

Carol Litchfield (1936-2012) earned her Doctorate in Organic Biochemistry in 1969.She was a professor at Rutgers University in the department of microbiology for ten years, until 1980 when she moved to the DuPont Company, first as head of Environmental Toxicology at Haskell Laboratory, and then as Senior Scientist for its bioremediation subsidiary.

Litchfield later started her own consulting company and worked for Chester Environmental before beginning work at George Mason University in 1993, where she remained for the rest of her career working as a professor and research professor for the Department of Biology and Department of Environmental Science and Policy.

Litchfield's work as a biologist and biochemist specifically focused on halophilic microbiology, that being, microorganisms that live in salt rich environments. Later in her life her interest in halophiles transformed into a fascination with the history of salt. Her collection, which now resides at Hagley, covers a wide range of materials related to salt, from images of salt production and advertisements from salt companies, to salt shakers and actual pieces of salt rock, as well as Litchfield's own personal papers, research, and work. The collection has not been digitized in its entirety, but you can view a selection of material online now in our Digital Archive. Just click here!