In our home, the kids’ bedrooms are on the second floor. None of these rooms have a porch or roof below their windows. Although that decreases the likelihood that my kids will sneak out as teenagers, in an emergency the kids would have a long and dangerous jump to safety.

Cue an internet search for escape ladders. Yikes! Those things are expensive! Not to put a price ceiling on our kids’ safety, but perhaps there was a cheaper option. Sure enough, I found several unused ladders for sale on-line. A slightly awkward, socially-distanced cash transaction between two anti-coronavirus masked strangers later, and my wife and I could sleep better knowing that in the event of a fire our kids could escape.

Months later, I cataloged a patent model from the Rothschild collection that offered a similar—yet unique—alternative to doing a sidewalk swan dive out of a burning building. In 1879, Frederick Swinden and Alfred Buxton of Naugatuck, Connecticut received a patent for a combination bedframe and escape ladder. The bedframe consisted of four iron ladders laid side by side. A separate iron rod secured the ladders to a wood box to complete the bedframe. Conical springs attached to the bottom surfaces of the ladder supported the mattress. (Mattress not included) 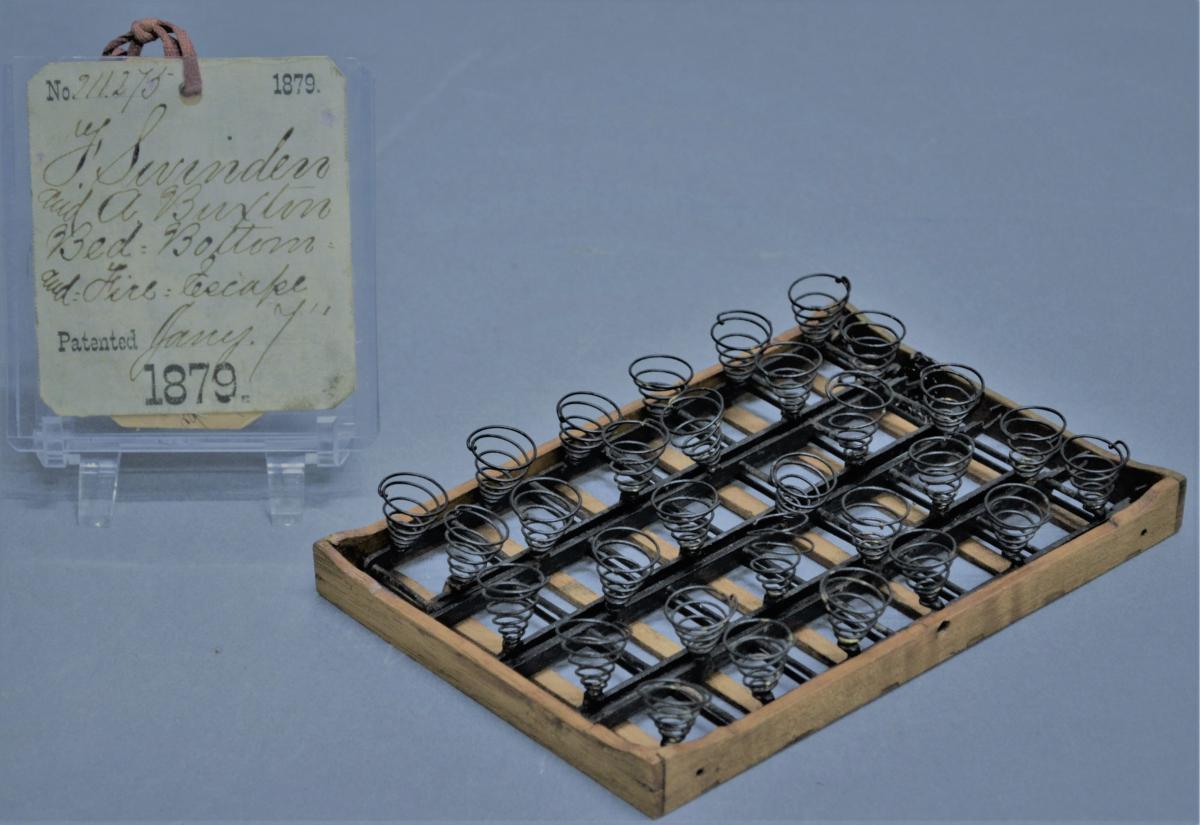 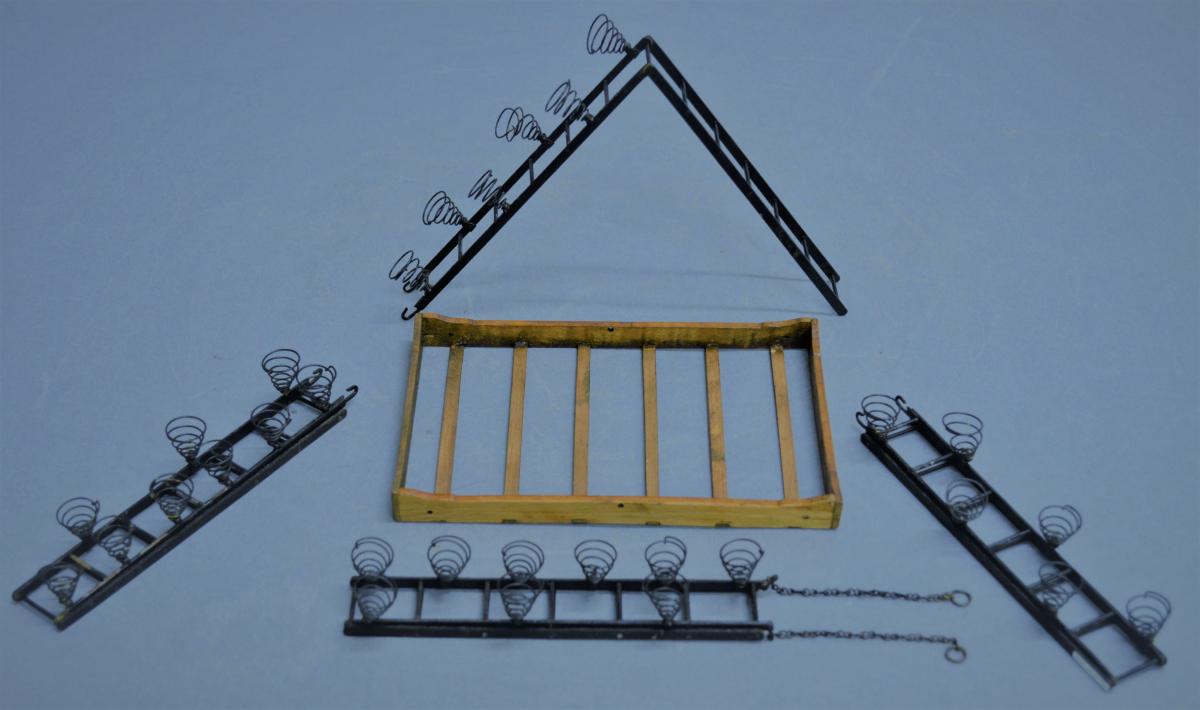 In case of fire or other emergency, the mattress could be thrown off and the rod connecting the ladders to the bedframe withdrawn. First, the user located the ladder with chains attached to the top. The withdrawn rod was fed through two hoops at the end of the chains. The iron rod spanned the width of the window frame to hold the ladder in place. The other three ladders had hooks on the top so that they could be hooked onto the bottom rung of the other sections of ladder as necessary. If that was not enough to reach the ground, the inventors attached another length of ladder on each section that could be swung out from underneath thereby doubling the length.

This sounds like an ingenious design. I was surprised to learn that this bed/ladder combo was not a novel concept in 1879. Swinden and Buxton state that “we are aware that a bed-bottom composed of ladders having helical springs, adapted to support the bedding, and serving as fenders to hold the ladder from the wall, is not new…”. But the use of the rod to hold the bedframe together, its function as an anchor for securing the ladder to the window frame, as well as the addition of a second jointed section of ladder beneath the primary, made their contributions to the design unique. And worthy of a patent.

I do not know if this bedframe was ever used in “large hotels, hospitals, and other frequented places”, as the inventors intended. But if it were available today, I might have considered buying it for my second-floor guest room. Not for my kids’ rooms, though. They might try to use it to sneak out! 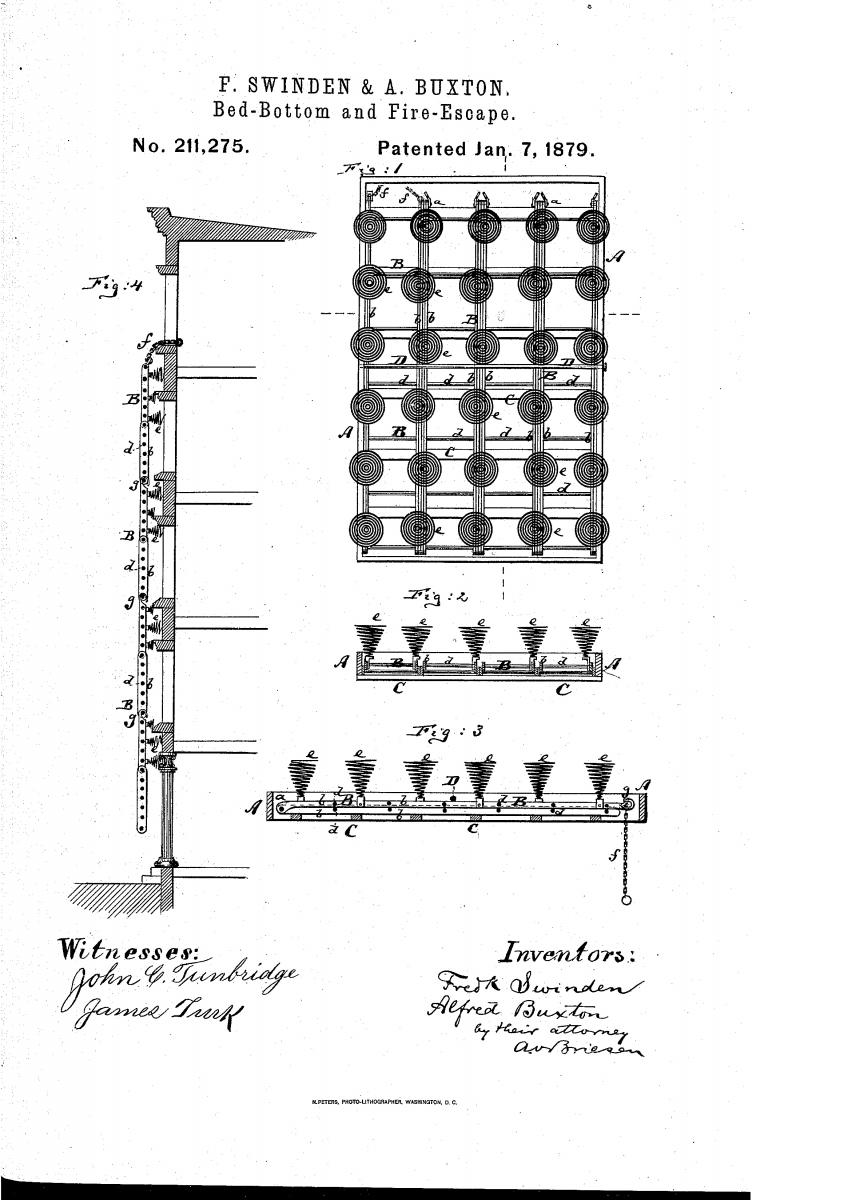