This month we are featuring a film from the Cinecraft archive used in a campaign from General Electric to convince consumers and businesses of the superiority of FM radio. “Naturally it’s FM,” released in 1946, explains for a non-technical audience the evolution of radio signals from crystal sets to AM and finally to FM.

Using a combination of live-action and animation as well as color and black and white film, the narrative is based around a married couple and opens with the husband buying his wife a new FM radio. Through a series of flashbacks, the film shows the couple as children and newlyweds discussing radio technology. The husband serves as the narrator explaining radio waves and signals prompted each time by his wife's question about how radios work. The film closes with a sales pitch for General Electric, highlighting its contributions to FM technology.

General Electric used the film as part of a campaign that deployed representatives from local FM radio stations to present the new technology in various venues throughout the country. Radio dealers and business owners served as the primary target for these events. We also find evidence of the film being shown to the general public in this ad from the Orlando Evening Star on April 21st, 1948: 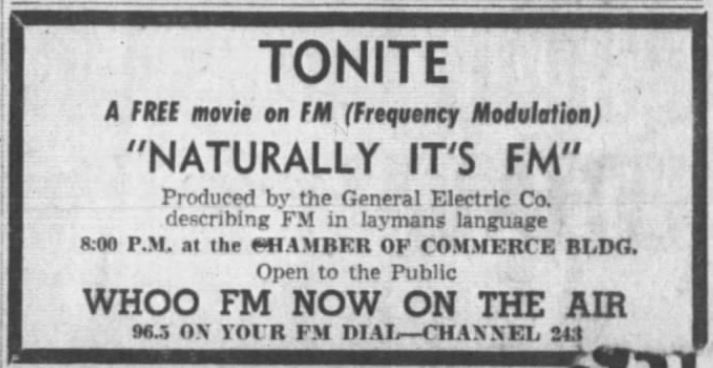 According to records found in the Cinecraft archive, the film costs $10,000 to make and Cinecraft produced both an English and Spanish language version. In addition to the film, Hagley also has scripts and correspondence related to its production.

Here is a short clip from the film that illustrates it's creative narrative and technical style:

View the film in its entirety here

Details around the film's public showings can be found in newspapers from the era - our search came via newspapers.com.

For more information about the Cinecraft collection, check out the following links:

Cinecraft news from the Research and Collections Newsletter