Center for the History of Business: Researching the Women who Opposed American Prohibition

Coffee is usually my first thought in the morning, but I kept forgetting my morning java the week I was at Hagley for my research on the repeal of Prohibition, supported by a grant from the Center for the History of Business, Technology, and Society. Sleepy from a long semester, I rushed out into a very warm December to walk through brambly hills to the Soda House and the files of the Delaware and Pennsylvania chapters of the Women’s Organization for the Repeal of Prohibition (WONPR).

Thanks to the involvement of women like Alice Belin du Pont, Hagley holds some of the only files relating to women’s attempts to overturn the 18th Amendment. The importance of women in establishing Prohibition is now well recognized, as is the important institution and state building function of this movement- see, for example, Lisa McGirr’s recent The War on Alcohol: Prohibition and the Rise of the American State. However, the role of women in Repeal has been little treated, aside from Kenneth Rose’s American Women and the Repeal of Prohibition. Too often, Repeal itself is framed as a top-down movement of elites who wanted the tax-revenue from re-legalizing the manufacture and sale of alcohol- just like some of today’s advocates for legalizing marijuana. While certainly there were many “big” businessmen committed to Repeal, their reasons were more complex than mere greed. They also developed a coherent and complex political theory rooted in commitments to democratic voice and populist power.

Indeed, much of the Repeal coalition, although initially supporting Franklin D. Roosevelt for president after he added a Repeal plank to his campaign, would end up forming the “American Liberty League,” led by John J. Raskob, which opposed Roosevelt throughout the 1930s. I came to Hagley because I was curious about whether the women involved in Repeal also had a more complex role than as proxies for their menfolk, even if many of them were married to prominent repeal industrialists. 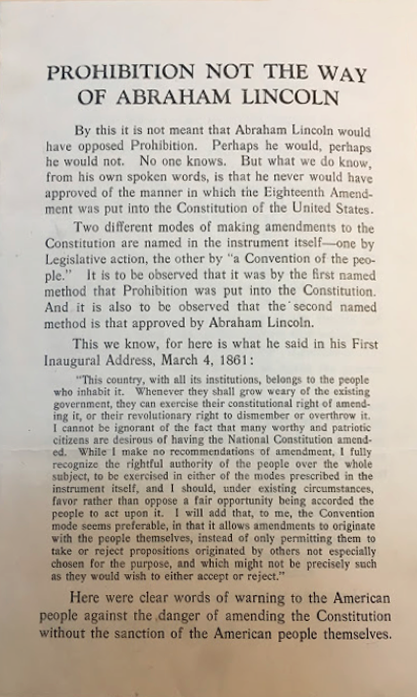 So, I came to Hagley in December 2015 to see how the WONPR advocates organized, advocated and debated internationally about Repeal of National Prohibition. I’m still digging through what I found, but it is clear to me that these members were doing more than supporting their husbands. They had a highly organized campaign, both electorally and aimed at public opinion, along with detailed arguments about Constitutional interpretation, federalism and social change. And, they took advantage of the frameworks set up by the pro-temperance movement to build on existing women’s clubs and civic associations.

My article laying out this argument will hopefully be published in 2017, using documents like the one shown here, “Prohibition Not the Way of Abraham Lincoln,” to show how the activists engaged in interpretive acts of popular constitutionalism as they worked towards their goal of Repeal, establishing them as political actors in their own right.

Alison Staudinger is an assistant professor at the University of Wisconsin-Green Bay.