This is the second of two articles on laminated artifact preservation. To read the first installment, follow this link.

An earlier research article highlighted the concerning preservation issue of paper artifacts laminated with cellulose acetate film. Now to provide some history about how this process came to be.

Early paper was made from recycled cloth rags, typically a mixture of cotton and linen. In the mid-1800s, wood pulp paper was developed, and by the 1870s, America acquired the technology to produce paper from processed straw and tree fiber. After a short time, it was apparent that this newer product lacked longevity. The paper often darkened and became brittle due to the ill effects of the extremely acidic production process and the lignin contributed by the wood.

Library materials with such severe deterioration are difficult to manipulate without causing additional damage and loss. It is no surprise that practices like lining or sealing paper artifacts between layers of translucent materials were done in an attempt to make documents more durable. Wall maps were commonly varnished to protect from moisture and dirt and lined onto heavy canvas backings. Handwritten documents were traditionally coated with paste and lined with thin gauzy silk crepeline. This treatment did not last since silk is especially susceptible to damage from long-term exposure to light and, like paper, becomes brittle with age. Unfortunately, these and even more damaging methods have been used on one-of-a-kind historic manuscripts.

The suitability of a conservation procedure is based partly on the prospects for reversing the treatment. Some document protection methods that seemed to be good ideas at first were subsequently found to be more harmful than helpful, and they are difficult to undo. Methods that used man-made polymers, waterproof coatings, and plastic films applied with heat are most vexing to paper conservators. For example, in the early twentieth century, Zapon celluloid lacquers had limited use for strengthening documents. This was bad practice as the coating became brittle and yellowed, which requires solvents for removal.

By the 1930s, the newest method of lamination involved applying heat to documents sandwiched between layers of cellulose acetate plastic film. The process came out of the U.S. National Bureau of Standards and was developed by William J. Barrow. It was most certainly a response to the oppressive number of collected records and books that were fracturing to bits with every turn of the page. Still, the lamination process caused additional problems. The heat used during the fusing of the film is damaging to the paper. Chemicals called plasticizers are incorporated into the film and will transfer into the documents, causing the film to shrink and become brittle. 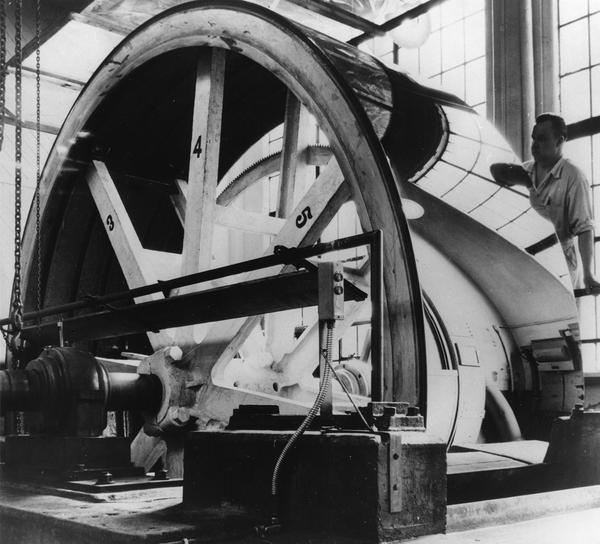 Cellulose acetate film was one of the products of the DuPont company, used in the manufacture of photographic film. To make the film, liquid acetate was poured onto a heated wheel like the one on the right. As the wheel spins, warm air dries the acetate, producing the film. It is possible that this DuPont Company connection had some bearing on the practice of cellulose acetate lamination for collections under the care of the du Pont family. There are notes within Hagley's archival records that describe specific laminated materials as being “in a plastic sheath”. These records were created in the 1950s before the Hagley Library was established, at a time when the early collections were being organized at P.S. du Pont’s Longwood. Aside from it using a DuPont product, cellulose acetate lamination was probably seen in a positive light and considered a cutting-edge, time-saving process.

We have not yet discovered who laminated the documents at Hagley. Whoever chose this treatment was well-intentioned, but fundamentally failed because they did not recognize the future impacts of the cellulose acetate lamination process. Many of the items were in decent condition, on good quality paper. Simple mending, good housing, and storage in cool dry conditions would have sufficed.

Laura Wahl is the Library Conservator at Hagley Museum & Library