Nineteenth century inventors in the United States were creative people; their innovative minds were contributing to the betterment of society by solving problems and making improvements. But, that doesn’t necessarily mean all of these individuals were polite, upstanding citizens. On the contrary, this month we bring you a story of an inventor, Thomas McSpedon, who was considered a bully by his peers.

To begin with the worst, McSpedon’s wife, Hester, appears to have been emotionally and physically abused by him. In fact, she filed for divorce TWICE over the span of their marriage (1839-1889). At McSpedon’s death, he is still listed as married, so it’s possible that the pair never did legally separate. Though, they do seem to live in separate households around 1880.

Thomas McSpedon resided in New York City, and worked as a bookbinder, stationer, and printer. His firm name, McSpedon & Baker held shops in both New York City and Washington, D.C. where they completed some printing work for the federal government. He has other business ventures throughout his life, including McSpedon & Robbins (envelopes) and the Patent Button Hole Collar Co. (Patent No. 45,621, Improvement in Machines for Making Paper Collars, in our museum collection, is likely associated with this venture).

His questionable professional character comes most in to play in reference to his position on the Board of Aldermen from 1856 to 1860. On numerous occasions he is condemned in newspaper articles. One of my favorites (yes, there are quite a few to choose from), because of its snarky, sarcastic tone, is shown below. This article seems to be in reference to McSpedon’s attempts to procure a contract for printing work with the city, which was obviously seen as a conflict of interest. 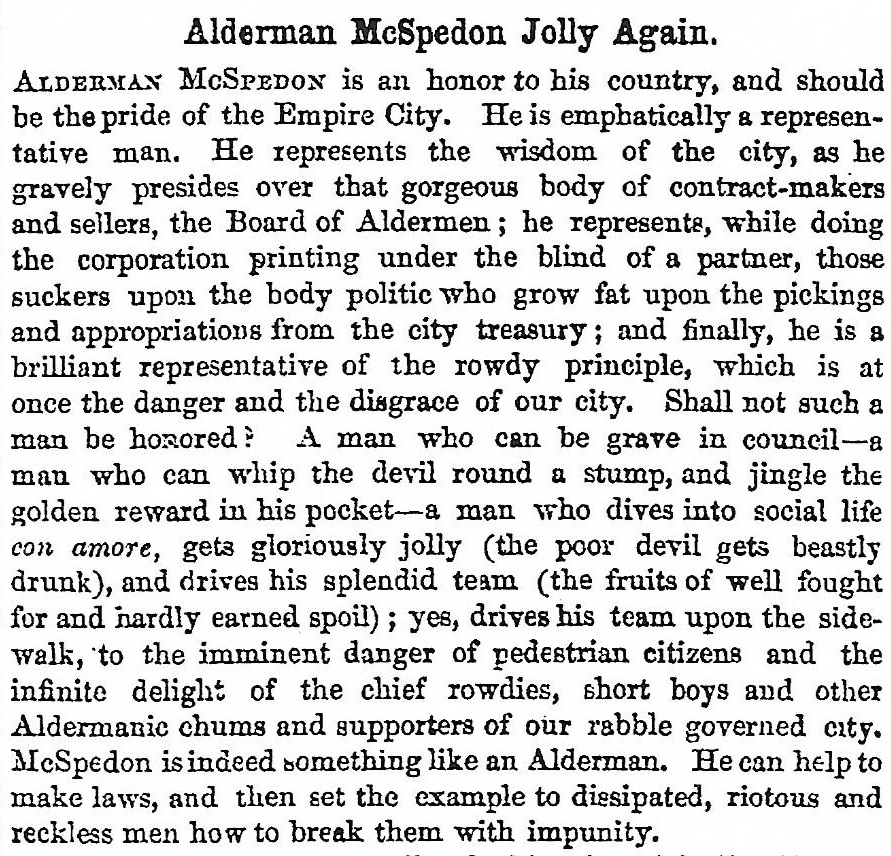 To make matters worse, McSpedon TWEAKED SOMEONE’S NOSE. Now, you may not think this is something to be outraged over, but during the 19th century it was considered the ultimate insult. A man’s nose was associated with his “assertion, will, and confidence.”

Somehow, Thomas McSpedon becomes a fire marshal by 1870 and later, by 1882, a deputy sheriff. Knowing what I do about his character, it amazes me that he was able to gain appointments to these positions.

Invention is a noble pastime, there is no doubt about that. And, many of the inventors represented in our collection have noble, uplifting, and inspirational stories. However, it is important to describe the reality of history – not all players were noble characters.

A special thank you to Trudi Koston, Museum Research Volunteer, for compiling this wonderful information about Thomas McSpedon, and the many other inventors in our collection.

Caroline Western is the Assistant Curator, Patent Models at Hagley Museum and Library. ​