New Director of the Center for the History of Business, Technology, and Society 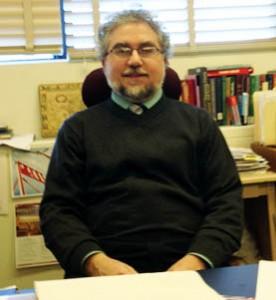 Hagley’s Center for the History of Business, Technology, and Society since 1994, became its director at the beginning of January. Together with the former director, Dr. Philip Scranton of Rutgers University at Camden, Dr. Horowitz has shaped the Center into the Library’s critical academic and public outreach arm, attracting scholars as well as a general audience to Library collections and increasing their use.

Last November, Dr. Horowitz, supported by the Center’s coordinator, Carol Lockman, organized the Center’s latest Hagley Fall Conference, which explored the intersection of oral history and business history. In other years, topics have included the business of food provision and markets, the life of new materials, and the fashion industry. Currently, Dr. Horowitz also organizes a spring symposium for Hagley, and hosts the ongoing Hagley research seminar series. The Center also provides a range of grants-in-aid to bring scholars to use the Library’s collections. Dr. Horowitz liaises for Hagley with the University of Delaware and other universities. As the Secretary-Treasurer of the Business History Conference, the largest organization of professional historians of business in North America with an international membership, Horowitz engages with scholars to bring them to Hagley and the Library’s collections.

The public lectures are a relatively new offering, and have been successful from their beginning in 2011, thanks to Horowitz’s instinct for popular topics and success in securing grants. Last November’s public lecture, featuring Dr. Albert Churella of Southern Polytechnic State University in Georgia speaking on the Pennsylvania Railroad—whose papers are a much-used Hagley collection—brought in over 270 enthusiastic participants (listen to the lecture here). Dr. Horowitz is a member of the Oral History Association and oversees Hagley’s oral history program. In 2012, having obtained local funding and partners, he produced the short documentary on Delaware artist Edward Loper based on an oral history in Hagley’s collections, which premiered in March at the Baby Grand Theater in Wilmington before an audience of 350.

Dr. Horowitz is the author of "Negro and White, Unite and Fight!" A Social History of Industrial Unionism in Meatpacking, 1930-1990, (Urbana, IL: University of Illinois Press, 1997); Putting Meat on the American Table: Taste, Technology, Transformation (Baltimore: Johns Hopkins University Press, 2006); and KOSHER USA: A Journey through its History (New York: Columbia University Press, under contract). He has edited Boys and Their Toys?: Masculinity, Technology, and Class (New York: Routledge, 2001), and co-edited Food Chains: From Farmyard to Shopping Cart (Philadelphia: University of Pennsylvania Press, 2009) with Warren Belasco, and His & Hers: Gender, Consumption, and Technology (Charlottesville: University Press of Virginia, 1998) with Arwen Mohun.