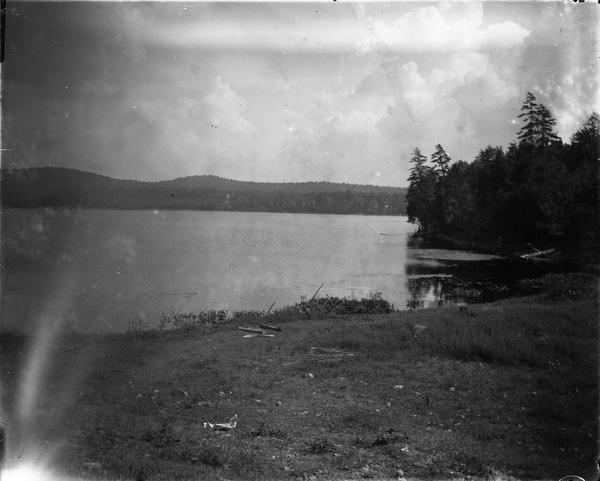 Delaware, more specifically the Hagley Center, is an unlikely place for local New Jersey sources, but I went there to discover Hudson Maxim’s papers. Visiting the Hagley Center was a rewarding experience, as I could study primary sources at the Hagley Center for my dissertation on Lake Hopatcong in New Jersey. Hudson Maxim was a prominent resident of Lake Hopatcong in the early 20th century. He wielded a great deal of influence on the development of the lake during its golden age. His papers are at Hagley because of his connections to guns and Pierre Samuel du Pont, who lived in Delaware.

The goal of my research was to see how Hudson Maxim, a man who patented mouse traps and helped win World War I, helped shape the “nature” around Lake Hopatcong. What I found was a man who was heavily invested in the preservation of the area, mainly for the enjoyment of visitors and, to his own admission, for the benefit of his own property. He was the largest property owner on the lake in the 19th and 20th centuries.

To further one of his local aims, Maxim was the driving force behind the Lake Hopatcong Corporation's effort to keep Lake Hopatcong from being a reservoir. He fought the post office, arborists, mosquitos, and to a degree, anyone with a differing opinion. In a New York Times piece about Hopatcong titled “We Call It Lake Life,” they called that period the Joe Cook era, after a famous Broadway star who resided in the area, but it really should be called the Hudson Maxim era if we look at invested interest. Maxim was famous in his own right, being called “The Most Versatile Man in America” by Thomas Edison.

Being a scientist, Maxim also predicted some of the issues the lake would face with overdevelopment. His insights into the potential ramifications of a large influx of permanent residents would be a great tool if we look to the past to protect the future. Indeed, the lake is now dealing with a year-round population and the effects of global warming, such as algae invading the waters. The algae is invasive due to warmer climates not killing it off during winter, and the resulting waste from an increased population leads to a fertile water body for algae to flourish.

Beyond Hudson Maxim, I also found sources on the Native Americans and also 19th and 20th-century sources about the attitudes towards the Native Americans. The towns, the lake itself, and the roads have Lenape names, but little respect is given to these first inhabitants—the names were more of a commodity to the settlers than a sign of respect. Luckily, that is starting to change, as seen in modern writings, which I will detail more in my dissertation on Lake Hopatcong.

There is a bevy of sources to still work through, but in the most unlikely of places for Lake Hopatcong sources, I found this hidden gem for my project. I am honored to study at the beautiful and very welcoming Hagley Center and find the missing pieces to support my work. By studying Maxim, I gained a sense of how the lake area developed during his time and beyond.

Peter Astras is an environmental historian and a Ph.D. candidate at Saint John’s University. In support of his research, Astras received grant funding from the Center for the History of Business, Technology, & Society at the Hagley Museum & Library.