The Pilot School's Mystery Along the Brandywine

One beautiful September afternoon, I received an intriguing email. The sender signed off with “Call me when you get a minute,” and thinking I’ve got 40 of them right now, I dialed their number and heard the following tale:

A schoolteacher from Wilmington's Pilot School hosted her annual end-of-the-school-year celebrations near Brandywine Creek in both 2021 and 2022. While her students were exploring the creek on their first visit, some were especially curious about a partially visible inscription on a stone that they believed might be a tombstone. During that same visit, they uncovered the name "James Noble." When they returned a year later, they also discovered the year, 1874. After getting permission to dig deeper (literally), the students enthusiastically worked for three days during July and August of this year removing mud and debris from the stone. Their efforts were rewarded when a stone bench was fully exposed. Days later, they learned the carved stone was a settee sculpted from an outcropping of native rock by James Noble. This event is described in Frank Zebley’s Along the Brandywine.

Intrigued, I did some figurative digging into the lives of the sculptor and the author who wrote about him.

James Noble (1835-1912) was a stone cutter in Wilmington, Delaware. City directories list Noble as working in this role for B&O Railroad, J. Bancroft & Sons, and the Brandywine Granite Company. He lived in the area known as Bancroft’s Banks which runs behind the current Delaware Art Museum. In June of 1887, a tornado ripped through Wilmington and caused a large tree to fall on the Noble home killing Elizabeth Noble, James’ wife. Noble also served during the American Civil War in the Grand Army of the Republic, Company B, 2nd Delaware Volunteers. By 1889, his military pension had increased to $12 a month. The 1900 census reveals that Noble was living at his daughter’s home on Shallcross Avenue and that at age 64, he was still a stone cutter.

Author, Frank R. Zebley (1883-1960), was a native Delawarean. In the 1920s and 1930s, he was in the construction business as one of the major developers of Wilmington’s Ninth Ward, building and selling more than 200 houses. He also originated the idea of building and renting out rows of single-car garages along residential alleyways. Zebley eventually served as Speaker of the Delaware House of Representatives in 1938 and was an avid collector, author, and photographer of the Brandywine region. Hagley’s library is fortunate to have a collection of his photographs and copies of his books. 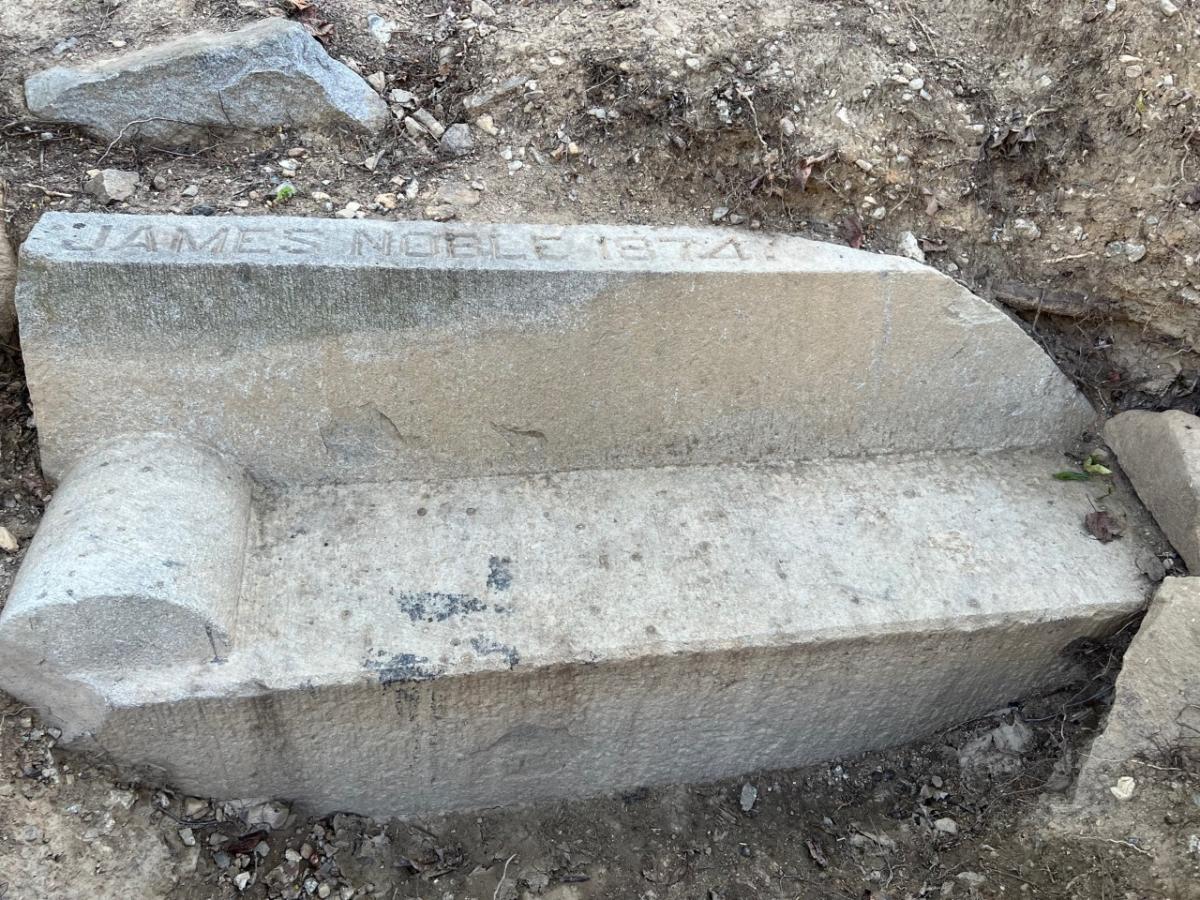 With this information, we return to the summer of 2022 and the determined students who came back to uncover the Noble settee. This group of young scholars is to be commended for putting to test their sleuthing skills and resolve to complete a year-long project. Located on private property, the stone bench is under constant watch. I was honored with an invitation to see James Noble’s creation and can report it remains comfortable in its surroundings on the banks of the Brandywine.

Marsha Mills is the Foundation Archivist at Hagley Museum & Library