The Work Is Never Done: Fighting Discrimination on the Pennsylvania Railroad 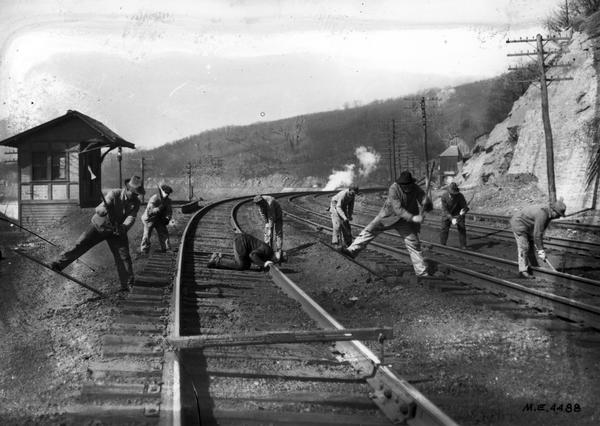 The records of the Pennsylvania Railroad Company (PRR), held at the Hagley Museum and Library, contain historical evidence of African Americans fighting discrimination in the immediate aftermath of World War I. During the war, President Woodrow Wilson nationalized the railroads by placing them under the control of the United States Railroad Administration (USRA). This move allowed the federal government to regulate freight rates, marshal material for the war, and mediate disputes between workers and management. With General Order no. 27 in 1918, the USRA mandated that equal wages be paid to railroad workers regardless of their race. Higher pay made railroad work more attractive to African Americans in the midst of the Great Migration, which saw hundreds of thousands leave the South for opportunities elsewhere. One of these men was Charles Malone.

Charles Malone was hired on with the PRR in Morrisville, PA, on July 5, 1917. He soon impressed the roundhouse foreman, who made Malone a hostler, where he helped position railroad engines within the train yard. Faced with a labor shortage due to the advent of war, the foreman tasked Malone with recruiting “some more good colored men.” Malone took on the task, working for the PRR during the day and recruiting new men at night. Eventually, Malone became foreman of the men he recruited, but a problem arose when “work got scarce” and departed workers – in this case, Italian immigrants –  returned to their jobs at the roundhouse. One by one, the Black workers received their walking papers, until there were no more for Malone to supervise. Then, in May of 1919, a member of the Brotherhood of Locomotive Firemen and Enginemen (BLF&E) came to the roundhouse and demanded dues from all of the hostlers. The next day, he returned Malone’s money and told him that since he was “a colored man,” he could not join the union and would lose his job as a result. Malone’s boss lamented the whole situation but explained that “the war was over, and they could get plenty of men now.” The racist exclusion of the union had tied his hands, since “men of any Nationality could belong to the Brotherhood,” except Americans with black skin.

Malone left the PRR and planned to return home to Pensacola, Florida to run his farm. Yet by July, he had not received his back pay. When he asked why, a railroad official informed him that the company did not intend to pay him. To this, Malone responded with righteous indignation. “Now, we are American citizens the same as anyone else,” he wrote to the Railroad Administration. “We are taxpayers, we do our bit and protect the American flag. We are good on the battlefield and we want to know why we cannot be good here.”[1] The PRR eventually awarded Malone his back pay, but Malone then brought suit against the BLF&E lodge in Trenton, NJ. Ultimately, attorneys for the union decided Malone had only been a “temporary” hostler and could not claim discrimination.

Malone, like many other Black railroaders in 1919, faced blatant opposition from the unions and relative indifference from the company. His letter to the USRA, contained in the Personnel Department of the PRR’s Eastern Region, is concrete evidence of these obstacles. It is a piece of history that illustrates why W.E.B. DuBois implored Black Americans to “Make way for Democracy! We saved it in France, and by the Great Jehovah, we will save it in the United States of America, or know the reason why.”[2]

Matthew ONeal is a social historian and a Ph.D. candidate at the University of Georgia. In support of his work, ONeal received research funding from the Center for the History of Business, Technology, & Society at the Hagley Museum & Library.