This bunting-draped courthouse in downtown Wilmington, Delaware is being posted in recognition of ... 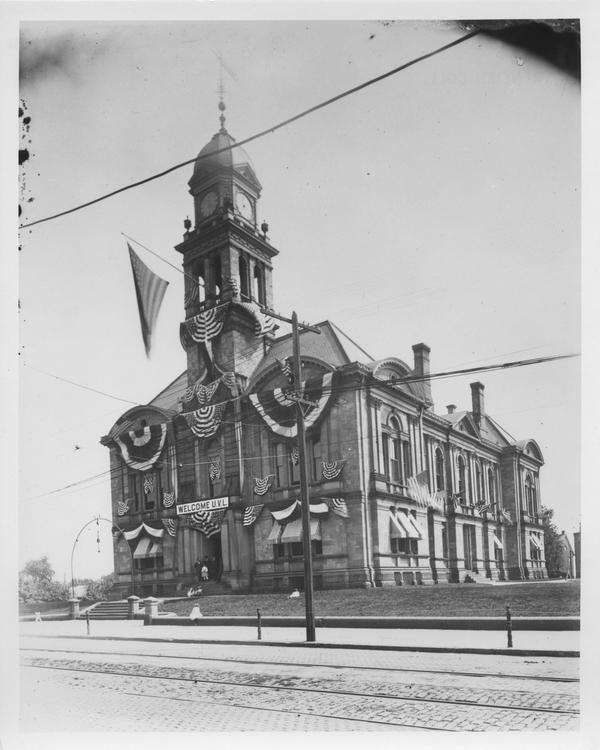 This bunting-draped courthouse in downtown Wilmington, Delaware is being posted in recognition of today's Veterans' Day holiday. The building was decorated to honor a Union Veteran Legion National Encampment in the city, held from September 12-16, 1905.

The Union Veteran Legion was founded in Pittsburgh, Pennsylvania on February 5, 1885, and offered membership to any veteran of the Union forces that had volunteered for service in the American Civil War, had served for at least three years, were honorably discharged after two continuous years of service, or who had been discharged at any point in their service because of injuries inflicted in the line of duty.

The Legion also held annual reunion encampments. This encampment was the 20th reunion of the league and the 40th anniversary of the end of the Civil War. The league headquartered itself in one of the city’s finest hotels, the Clayton House on the corner of 5th and Market Streets.

In addition the decorations seen here, the city also constructed a Welcome Arch at 2nd and Market Streets. The arch was funded by merchants in the area of the 200 and 300 blocks of Market Street. Design and construction of the arch went to Howard D. Ross and W.D. Haddock & Co., respectively. The city’s E.L. Peacock Company was tasked with decorating the arch with bunting and other adornments, while the Wilmington City Electric Company, the Peoples Railway Company, and Garret, Miller, & Co. provided the electric work to furnish the arch’s 500 electric lights. The structure was maintained for a short time after the encampment, and was redecorated for Christmas after the veterans’ departure before being dismantled in January, 1906.

This photographic print is part of Hagley Library’s collection of Pierre A. Gentieu Brandywine River Valley photographs (Accession 1970.001).  Pierre A. Gentieu (1842-1930) was a long-term employee of E.I. du Pont de Nemours & Company. He was also a photographer and artist, and the du Ponts allowed him to photograph the family, their employees, and the built world and daily lives that made up their lives along the Brandywine.

His work, now the Hagley Library’s collection, provides an invaluable photographic record of the company's Brandywine Mills at the turn of the century. To view the collection online now in our Digital Archive, click here.