On this date, November 10, in 1885 the 17 year old son of the German inventor and engineer Gottlieb Daimler ... 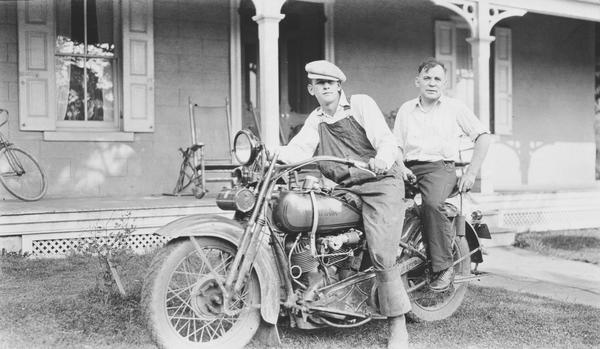 On this date, November 10, in 1885 the 17 year old son of the German inventor and engineer Gottlieb Daimler (1834-1900) made the first long-distance test run of the world's first motorcycle. Paul Daimler traveled from Cannstatt to Unterturkheim and back on the "Reitwagen", a motorcycle prototype with a wooden frame and wheels, no suspension system, a leather drive belt connecting the engine to brass gears on the rear wheel, and a speed limit of of about 7.5 miles per hour.

While the ride was an uncomfortable one, it provided all the proof of concept that Daimler needed that his engine would work, and it was used to on Daimler's first motor-powered carriage, the Daimler Motorcoach, in 1886.

The work done that day would also make this photograph possible. Taken in 1924, it shows Howard Ellsworth Seal, Jr. and Lewis Welch on Harley Davidson motorcycle at Locust Knoll Farm in Chadds Ford, Pennsylvania. It is part of from Hagley Library's collection of Edward J.S. Seal photographic reproductions (Accession 1971.336).

This collection features over 300 photographs taken by the Seal family of Chadds Ford, Pennsylvania during the first half of the twentieth century. Many of these images offer a glimpse into family and town life in Chadds Ford and Wilmington, Delaware during the 1920s and 1930s. The images feature Seal family members, friends, neighbors, and employees. Other subjects include the 1939 World's Fair in New York, the artists N.C. and Andrew Wyeth, and local bridges and roads. To view this collection online now in our Digital Archive, click here.