One of the interesting aspects about my job is the connections that can sometimes be made between vastly different artifacts. One day while checking a collections storage room, a large ceramic pitcher with the name “Mowbray” caught my attention. The name was familiar and it took a while before I remembered where I had seen it before and finally connected it to one of our 850 patent models.

George M. Mowbray of North Adams, Massachusetts, was granted U. S. patent #106,606 for an “improvement in apparatus for the manufacture of nitroglycerine” on August 23, 1870. According to the patent Mowbray invented a machine that combined glycerin with a mixture of sulfuric acid, nitric acid and glycerin that had been previously cooled by the means of centrifugal motion. In essence this machine created more precision in mixing nitroglycerin than had the hand-labor that had been used before. Now I know that Mowbray was involved with manufacturing nitroglycerin. 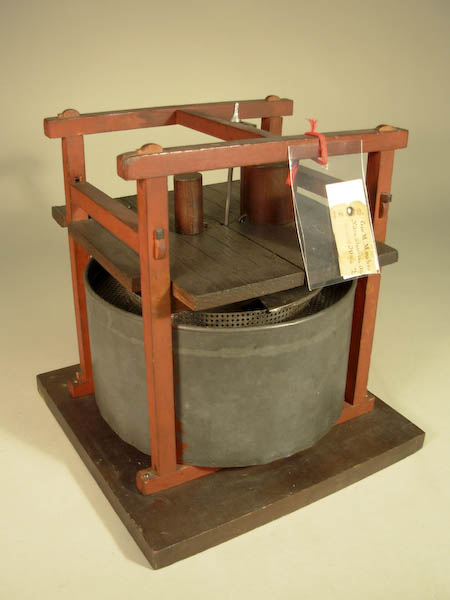 Patent model: Improvement in apparatus for the manufacture of nitroglycerin (Accession #77.26)

So who was George Mowbray? Born May 15, 1815, in Lewes, England, Mowbray was a chemist by trade. He immigrated to the United States and became a naturalized citizen in 1858. Searching for other patents reveals that Mowbray was a successful inventor with 23 patents from 1859 to 1890. His earliest patents relate to the oil industry which makes sense since he worked in the Pennsylvania oil fields early on. Then there is a big shift into manufacturing nitroglycerin along with making fuses and blasting boxes to ignite it. Finally in the 1880s-1890, Mowbray’s interest changed once again to manufacturing nitrocellulose so that it could be used for other materials such as a patent he received in 1885 for creating a plastic compound resembling ivory, which to all essential purposes was celluloid. Mowbray died on June 22, 1891. 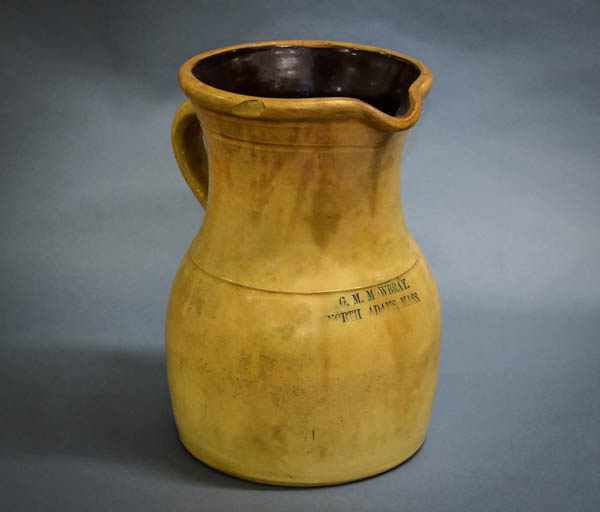 Now back to the pitcher which is labeled "G.M. Mowbray/North Adams, Mass." The pitcher turns out to be extremely interesting due to its provenance which stated that it had been used to carry nitroglycerin in the Hoosac Tunnel project in Massachusetts. Almost five miles long, the tunnel was begun in 1851 and had only cleared one mile fifteen years later. Learning about Mowbray’s work on nitroglycerin led to him being asked in 1867 to manufacture the explosives for this project. After his start-up process, Mowbray made up to 6,000 pounds of nitroglycerin per month. Since it was far more powerful than blasting powder, progress was accelerated to the point that the tunnel was finished in 1875. It is almost hard to believe a simple ceramic pitcher could be used to transport such a volatile explosive!

Debra Hughes is the Curator of Collections and Exhibits at Hagley.