Can I have a wordle with you?

Have you been caught up in the Wordle craze yet? Wordle is a simple word game that was created in 2021 by a Brooklyn engineer named Josh Wardle for his partner to enjoy. He set up a basic website where a new five-letter word appears once a day. There are six chances to guess the word after feedback that the website provides; whether any of your letters are in the secret word and whether they are in the correct place. Wardle shared the game with his family, and soon it became a viral sensation.

The website launched in October of 2021 and had 90 users on Nov. 1. By early January, 300,000 people were playing, and only a few weeks later, about 2 million people played per week!

The New York Times took notice of this popular game, and in January of 2022, they purchased the game.

As an avid word game player, Wordle reminded me of another five-letter word game from my childhood called Jotto.

I pulled out our old Jotto tablets and soon had my family hooked on this game. I discovered that my set was made by Selchow and Righter, the company that also makes Scrabble. 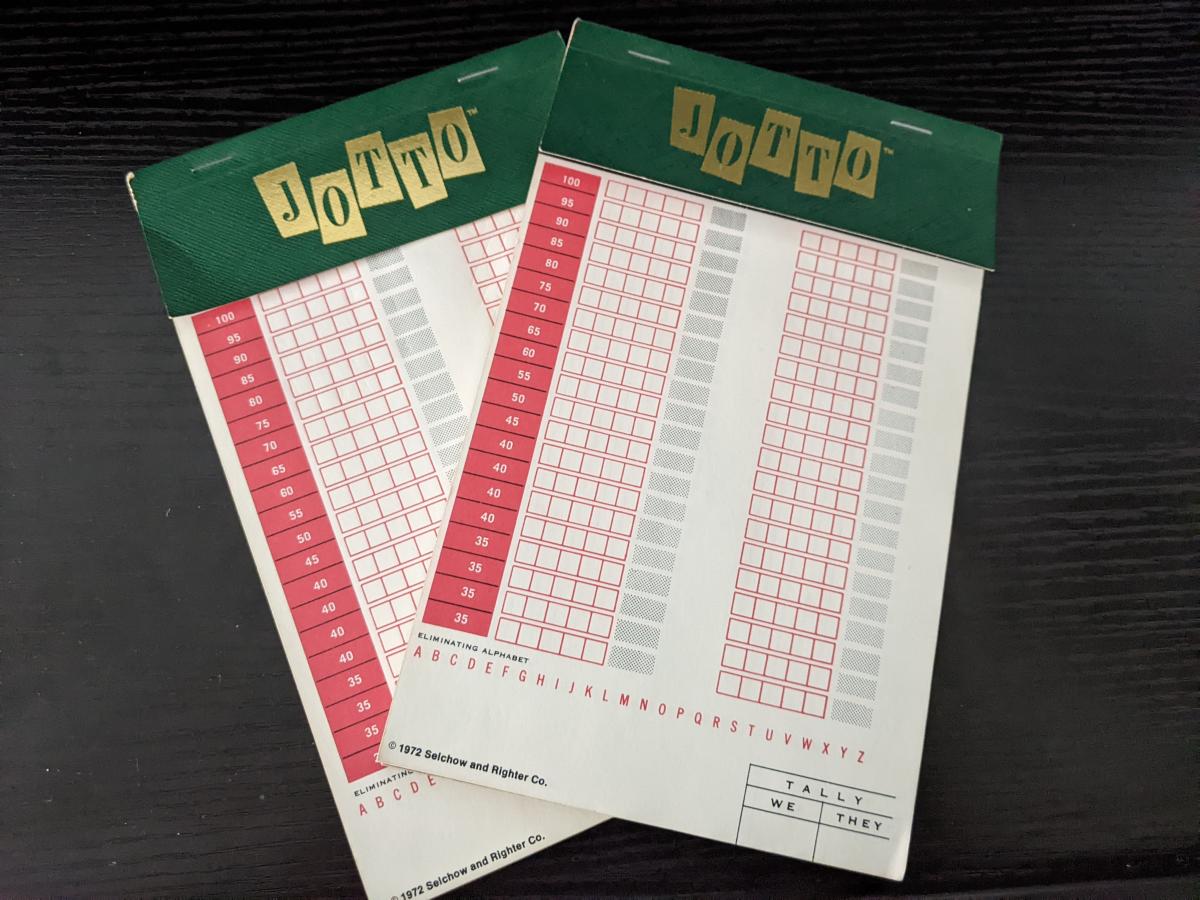 I looked through the collections at Hagley and found that we have a trade catalog from 1871 from E. G. Selchow & Co., “Manufacturers, publishers and wholesale dealers in Games of All Kinds.” 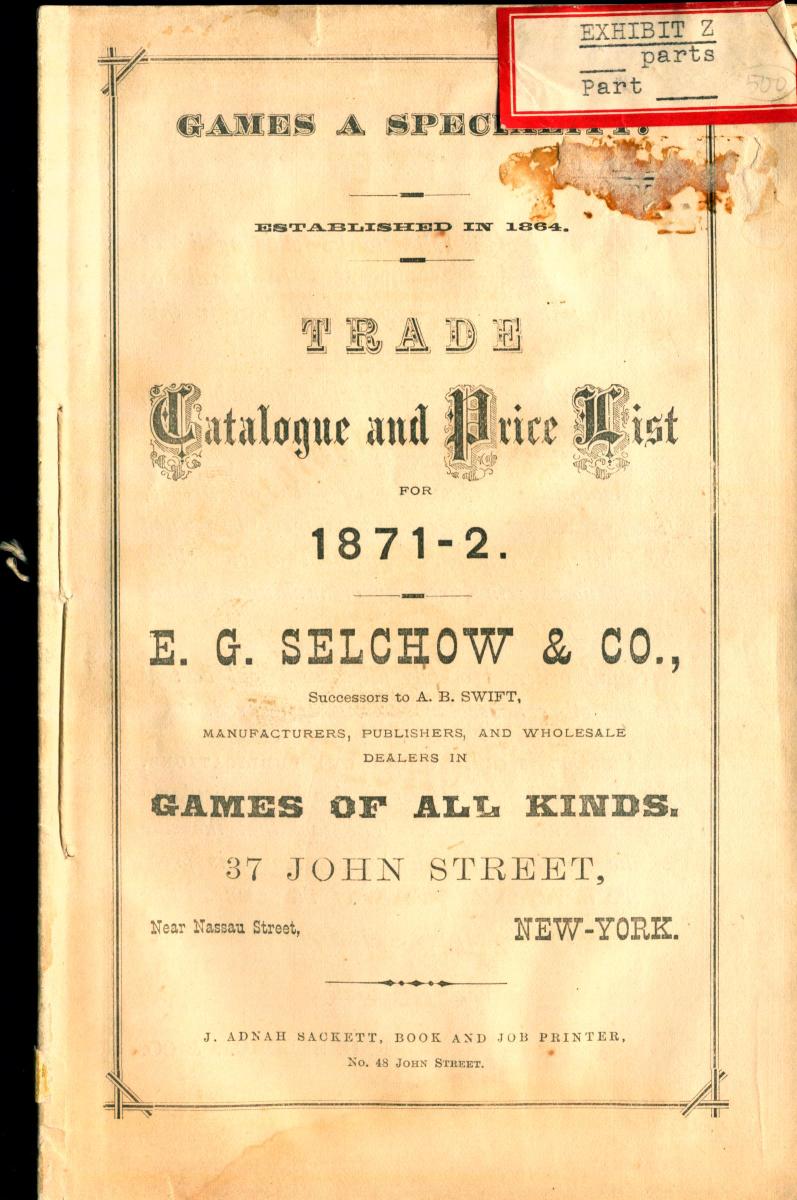 The E. G. Selchow Company was founded in 1867 when Elisha Selchow took over his father’s box manufacturing company. In 1870, Elisha Selchow bought the A. B. Swift company, which included the rights to the game Parcheesi. He hired John Righter from the company to work with him. By 1880 the two men became partners, forming the Selchow & Righter Company.

Parcheesi went on to become America’s best-selling game until Monopoly was released by Parker Brothers in 1935. 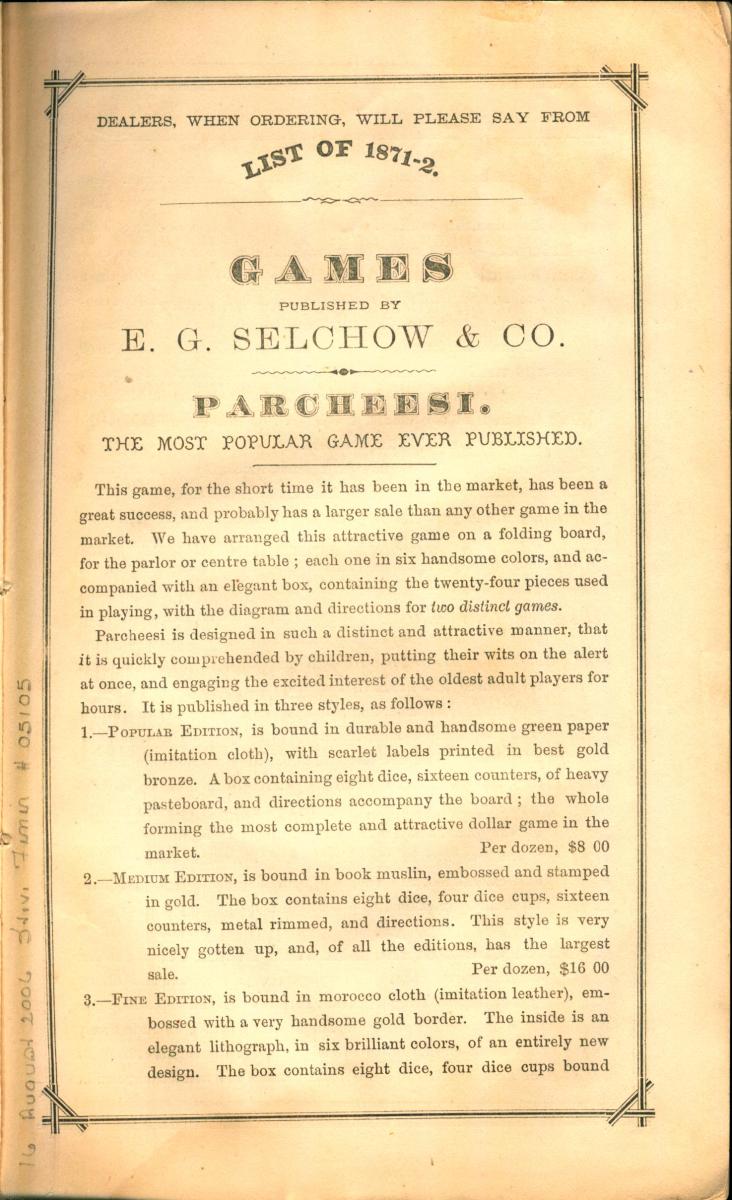 Harriet Righter, John’s daughter, was the company president of Selchow & Righter from 1923 to 1954. She decided that the company should manufacture games themselves and put more emphasis on advertising and marketing.

Anagrams has been a popular game in this country since the late 1800s. Letter tiles of cardboard or wood would provide hours of entertainment as they were arranged into words. Selchow and Righter introduced their version in 1934. 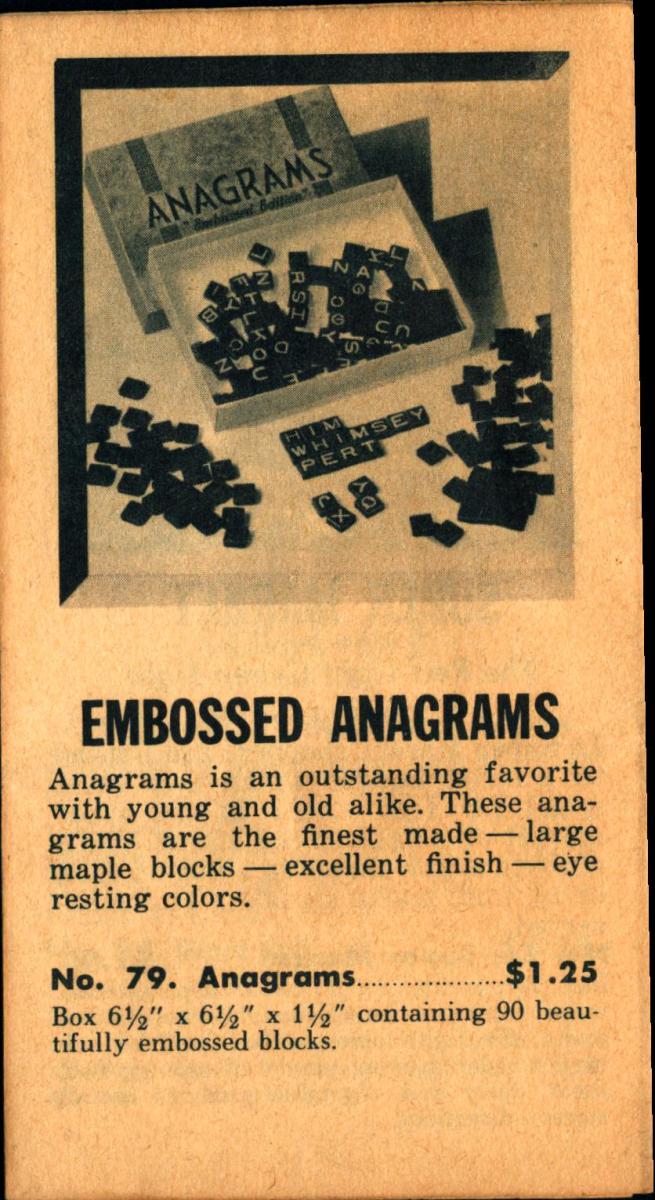 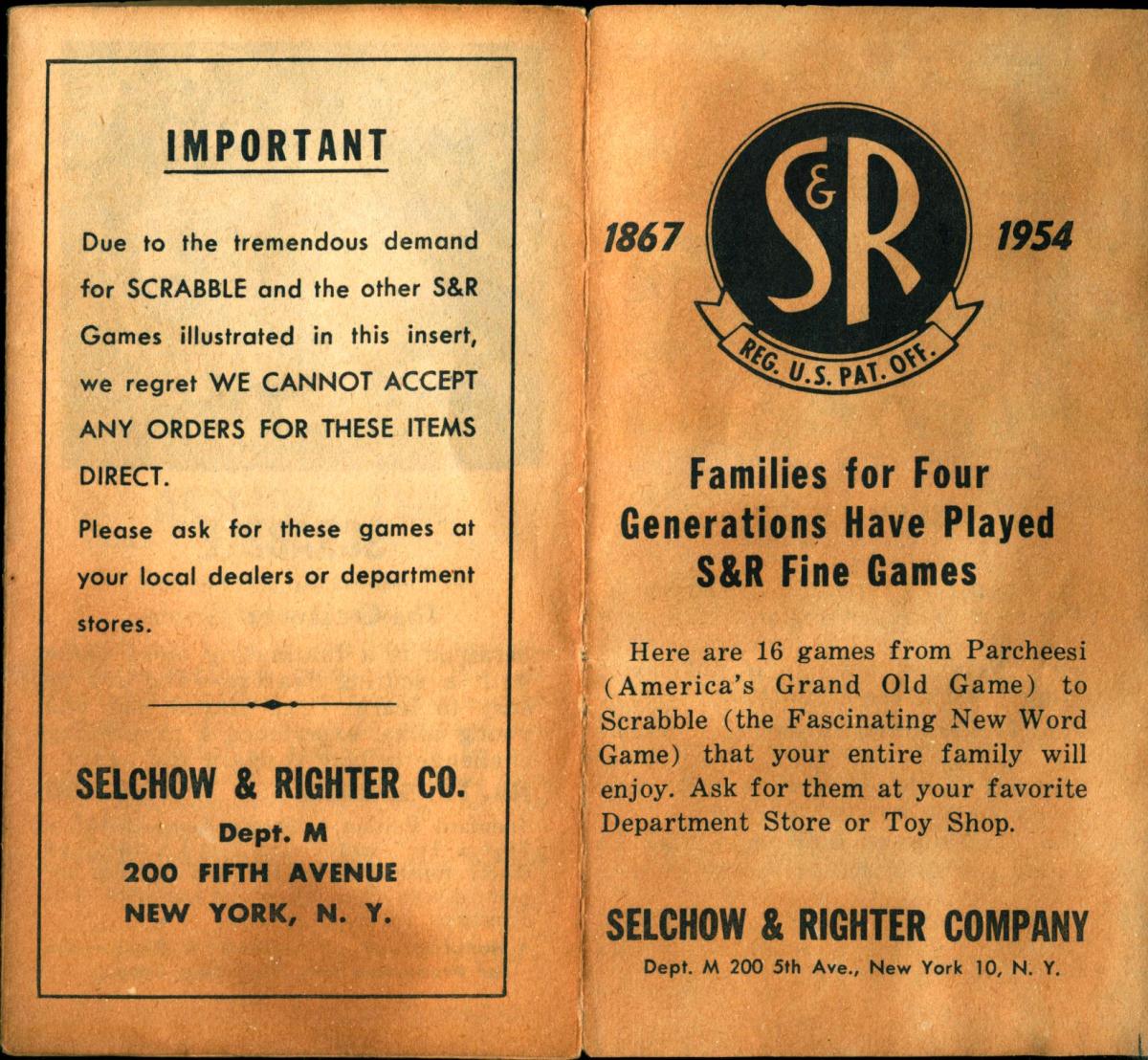 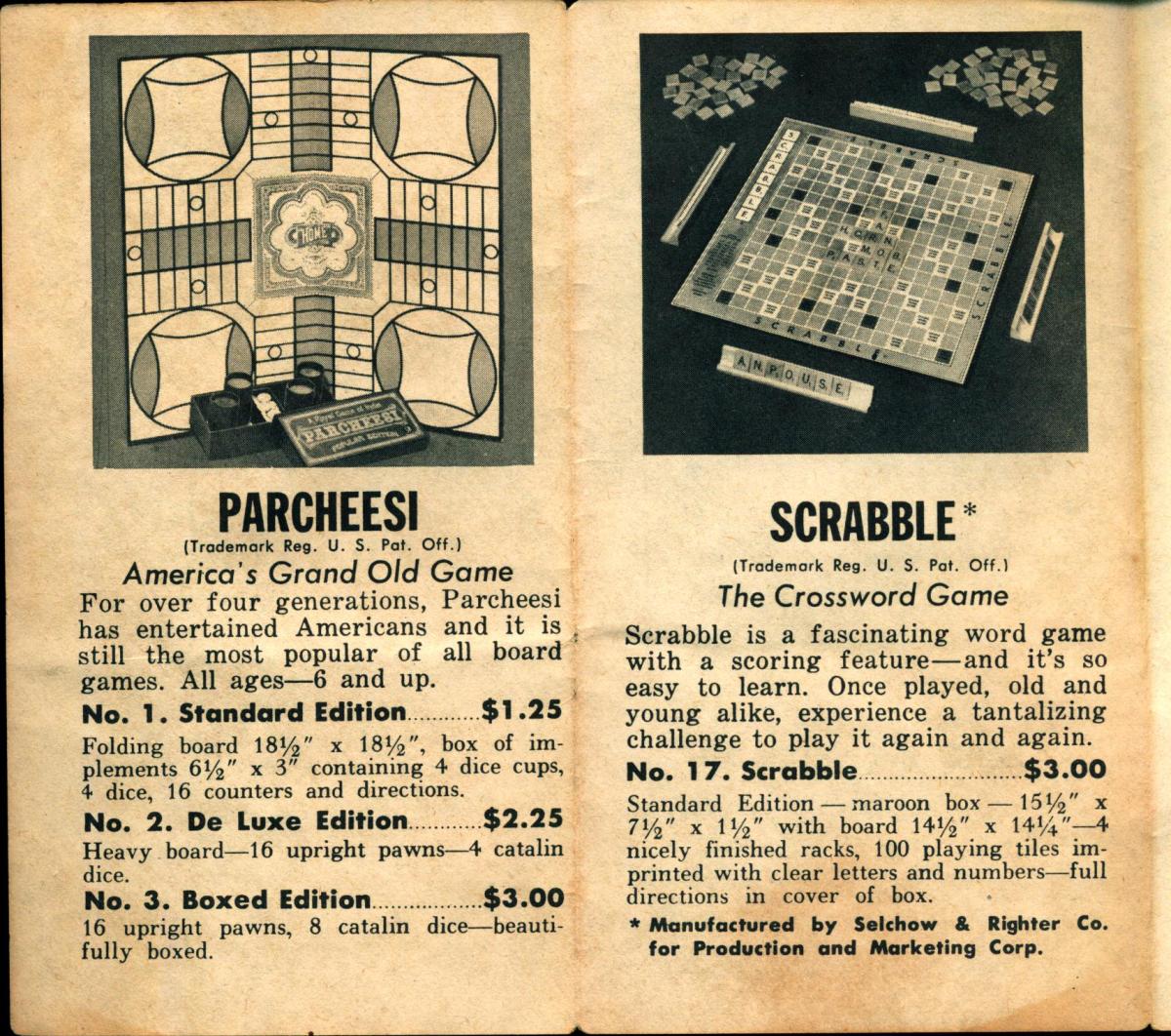 Jotto was invented in 1955 by Morton M. Rosenfeld and marketed by his New York-based Jotto Corp. The game was later licensed by Selchow and Righter. The game stopped being produced for a while but was reintroduced in 1997 by Endless Games. I don’t think that it’s currently being produced. 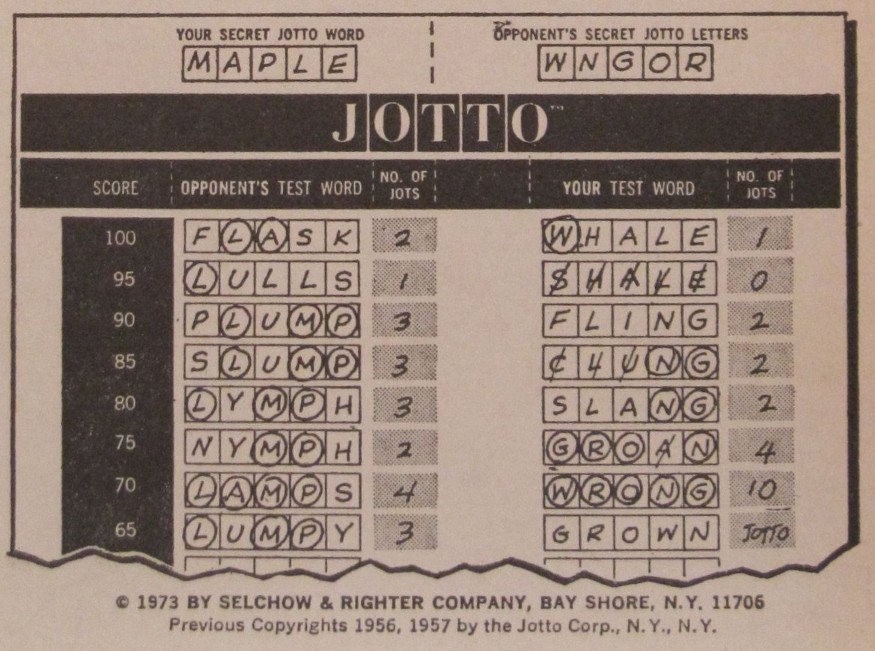 Selchow and Righter acquired another popular game in 1982 when it licensed Trivial Pursuit. In 1986, following years of continued success with Parcheesi, Scrabble, and Trivial Pursuit, Richard Selchow, president of the Selchow & Righter and grandson of E.G. Selchow, sold the company to Coleco (the makers of Cabbage Patch dolls.) Unfortunately, Coleco went bankrupt soon after, and the company was bought by Hasbro in 1989.

Luckily, Parcheesi is still made by Winning Move Games, and Hasbro is still making Scrabble and Trivial Pursuit.

It may be harder to come by an old Jotto set. I see that the prices have risen A LOT on eBay, probably because of the popularity of Wordle!