Conservation: The Case of the Mysterious Red Spots - Deterioration of Chromogenic Color Prints

On October 1st Hagley presented a public program on the preservation of family photographs. Since the history of photography now spans 175 years and includes dozens of processes, I was curious to see what types of items the attendees would bring for examination and discussion. This color portrait was one of the items brought in, because it displayed some obvious deterioration problems. The owner had hoped that there would be some way it could be improved with conservation treatment.

Below is a portion of the photograph showing a pattern of fine red spots. 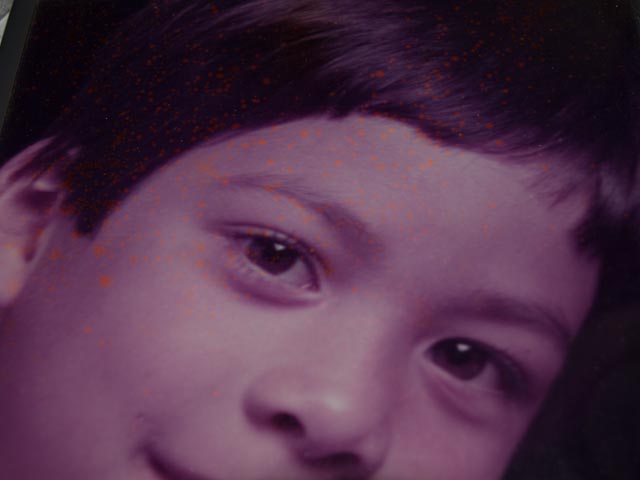 There is nothing terribly unusual about the type of photograph. Everyone has color studio portraits of themselves and family members, although printing out photographs at a lab has become increasingly rare.

The photo in question is a chromogenic color print on resin coated paper. (In photo and paper conservation terminology this is called the support.) This support is composed of a paper sheet, with an outer coating of polyethylene on both the front and back.  The image is composed of cyan, magenta, and yellow dyes in a layer structure.

Unfortunately photographic images composed of dyes are very susceptible to fading, making them subject to odd color shifts as is seen with this print, which is primarily magenta in tone. The yellow and cyan dyes have faded, due to long term display. Keeping color photos in the dark does increase their lifespan, however, they will eventually fade regardless of display time. The amount of fading may not occur to a noticeable extent in your lifetime if they are kept off display. The temperature and humidity in which the photos are kept also has a direct impact on their longevity. Cooler temperatures and lower humidity reduce the chemical reactions that occur with these objects and therefore the fading is reduced.

Unsightly red spots are very evident over the top half of this image. The spots are quite small and look like they may be the result of a spray of some sort that landed on the image. 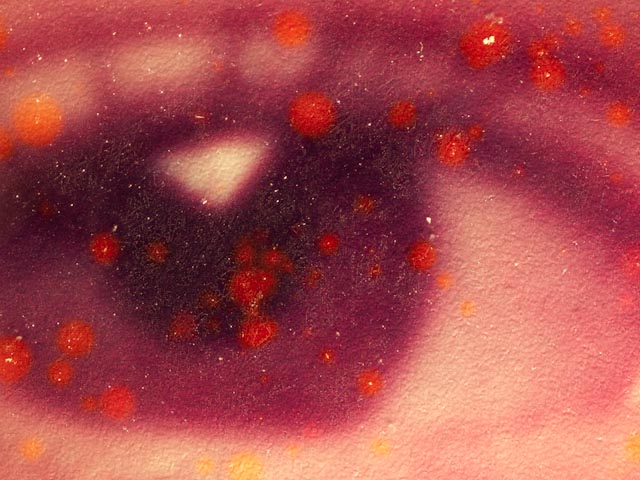 It is possible that some contamination occurred when the photograph was printed or developed or that a cleaner in a frame shop accidently was sprayed over the print. Examining the photo with ultraviolet light did not reveal any particular differences in fluorescence that would have revealed a spray lacquer. Lacquers were often applied to studio portraits to protect them from fingerprints, and as an add-on to boost revenues for a studio. Cyan dyes are sensitive to acids and can degrade in the presence of moisture. This is just speculation, but it may be that some acidic residue on the photograph interacted with the cyan dyes gradually over time. It could have occurred when the humidity inside the frame was elevated, which can happen when a sealed item under glass heats up in direct sunlight. Another possibility is that the color couplers present in the paper interacted with an oxidizing chemical contaminant that formed a red dye stain. Color couplers are present throughout the emulsion and react with the photographic development chemistry to form the color image in relation to the amount of color in exposure in each area. It is also possible that a solvent, such as alcohol, was present in the contaminant and that this increased penetration of the oxidizing chemical.

Unfortunately there is no effective treatment for restoring faded photographic images, whether black-and-white or color. Direct chemical treatments on original photographic materials risk further damage to the objects, and conservators do not typically do this type of treatment. We do have the capability of amazing improvements using virtual retouching. It is possible to produce an improved image using the magic of computers and digital imaging, which can both remove the spots and remedy the imbalance of magenta tone in the image.