Tape removal is often a tedious and time consuming undertaking. A while back, a 1942 tourist map of Los Angeles came into the lab with just about every fold reinforced with a rubber based pressure sensitive tape that has yellowed, become brittle and shrunk over time. Library conservator Laura Wahl assessed the condition, performed the preliminary documentation and testing and formulated a treatment plan - no easy task considering all the possible options for removal of tape. And then it sat.

On March 27, I decided enough was enough – this tape riddled map will be shunned no longer. I brought the folded map over to my work bench, read through the treatment proposal and got to work surface cleaning, which took no time at all. On March 31 I began removing the brittle tape carrier, the plastic film that is coated with adhesive. Since the rubber based adhesive has also begun to deteriorate, it’s not as sticky as it once was, and needs to be softened to release the carrier. This is achieved by using a solvent chamber. Accordion folded blotter strips are placed in a small beaker, saturated with solvent and then the beaker is turned upside down and placed directly over an area with tape. And then it sits. 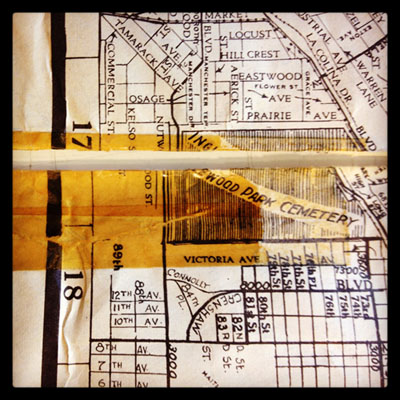 For this particular tape, the chamber must be in place for 40 minutes before the adhesive has softened enough to release the carrier without removing paper fibers. I’ve been working two chambers at a time, removing approximately 2 inches of tape (the diameter of the beaker is 1”) every 40 minutes. Thankfully this work is carried out in our fume hood so I can be working on other treatments concurrently.

It is now mid-May, and I’ve removed approximately one half to two thirds of the tape carrier. Remember the bit about tape removal being time consuming & tedious? After the carrier has been removed, there is adhesive residue to reduce and tears to be mended. After all, the tape was applied to hold this map together. When it’s all done, the map will lie flat, inside a folder, inside a drawer, where it will sit, waiting to be viewed.

Sharon Fickeissen is the Conservation Technician at Hagley Library.