My last article reviewed the development of return on investment (ROI) by Donaldson Brown and its rapid adoption by DuPont as its primary financial measure.  As a young treasurer, Brown was challenged with not only improving understanding of the new concept by the company’s Executive Committee but also with creating reporting methods that would incorporate it into their meetings.  In today’s business world, that would be accomplished with PowerPoint presentations, projectors and electronic displays. But how did he solve the problem a century ago?

In 1919, DuPont created a room specifically for maintaining large charts that showed important financial statistics for its explosives business and emerging chemical ventures. The room was located on the renowned ninth floor of the DuPont Building in Wilmington, a few steps from the offices of Executive Committee members. Multiple charts for each business tracked sales, expenses, earnings, assets and ROI for the current year and ten years of history.  Additional charts also tracked the information by month and included forecasts.

The chart room was fairly straightforward in the beginning but became more complex over time. A photo in Hagley’s collection from about 1920 shows the first system was a single rack of charts mounted in hinged frames, like pages in a notebook, which could be flipped from right to left as the presentation progressed. Managers sat in front of the display on rolling chairs so they could shift as the presentation moved down the line. In some respects, the room was more useful as a data library than as an effective presentation vehicle. Either way, the idea was advanced for its day. 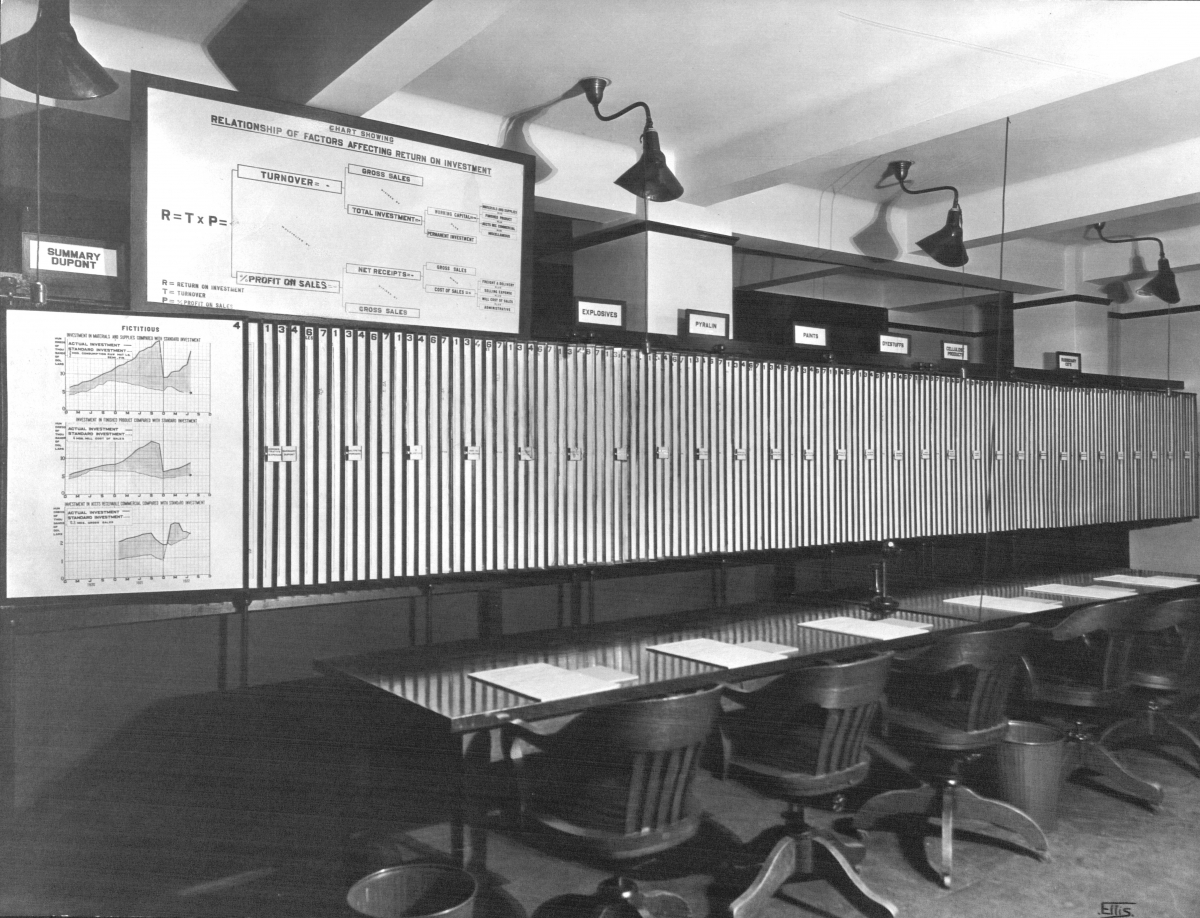 As DuPont added new businesses in the 1930s and 40s, the number of charts increased substantially. Not surprisingly, the challenges of presenting them also grew. The end result was a monorail system that suspended the charts on wheeled frames which allowed them to be rolled in front of committee members. As the attached photo from 1950 shows, it was a fairly ingenious solution for getting lots of information in front of an audience in a limited amount of space.  Sometime later, a small amphitheater with tiered seating was added that allowed departmental managers to also participate in the reviews, which were delivered by the chart room supervisor.

In 1950, DuPont hosted a series of presentations about the chart room, the techniques it employed and “management by ROI” at a financial conference hosted by the American Management Association (AMA). It was the first time that the chart concept was shown outside of the company. The talks offered substantial detail about the design of the charts, the financial disciplines used by the company and how they were presented to executives. At that time, the company maintained 350 charts which were alternated between different meetings over the course of a year. Reprints of the AMA presentations can be found at Hagley’s library in the book System and Profits by H. Thomas Johnson (1980).

The chart room was used from 1919 through the early seventies, at which time C. B. McCoy, DuPont’s CEO, had it replaced by information booklets that were distributed to the Executive Committee and Board of Directors. Printing and reproduction techniques, particularly the Xerox® copy machine, had evolved to where it made more sense to print books than to keep a small group tasked with updating hundreds of posters. In addition, the widespread use of overhead projectors in the late 1970s also changed the way that DuPont and other companies presented such information.

In an interesting conclusion to this story, one would expect that the General Motors Corporation would have also had a chart room. Recall that Donaldson Brown, John Raskob and Pierre S. duPont left DuPont after World War I to oversee the company’s investment in GM. Although GM adopted many of DuPont’s financial practices, the chart room may not have been one of them. The GM Heritage Center has no record of one nor was it ever mentioned by Brown, Alfred Sloan (GM CEO), or the many historians who have studied the company. Given GM’s prowess for making things that move and look stylish, one can only wonder what they might have come up with had they built one! Their Heritage Center is continuing to research the topic so there may be a revelation yet to come.

Gene Castellano is a contract collections specialist working on a guide to Hagley’s financial collections.  He held positions in finance and business analysis at DuPont and W. L. Gore and Associates, Inc. during his professional career.