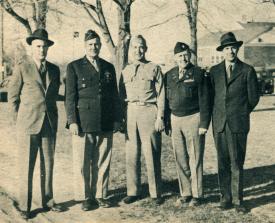 The Imprints Department at Hagley Library holds a number of fascinating publications that document daily life at Hanford Engineer Works, the site where plutonium production for the Manhattan Project was ramped up to an industrial scale during World War II.

The DuPont Company accepted assignment by the Manhattan District of the Army Corps of Engineers as the prime contractor to make that production a reality. The Hanford site, selected in 1943, was ideally situated to meet the need for abundant land, a sparse population, a clean and abundant water supply, and above all, secrecy. Construction of the facility, codenamed Site W, began shortly thereafter under the supervision of Gilbert P. Church, the field project manager of DuPont’s construction team at Hanford.

DuPont advertised in newspapers around the country, such as the Milwaukee Sentinel (below), looking to hire workers for an unspecified "war construction project" in southeastern Washington that offered an "attractive scale of wages" and living facilities. Once workers arrived, however, they had to get their bearings.

All of the following publications concerning life at Hanford were donated to Hagley by Gilbert Church. Click on the title to see the full text for each:

Dear Anne, printed by Hanford Engineering Works, is a pamphlet that explains all of the steps to be taken by anxious new employees upon their arrival: what to do first, signing up in the employment office, providing information about barracks assignments, orientation meetings, etc. It is charmingly written in the guise of a letter from an employee named Ruth to her friend Ann, who is moving shortly to take a job at Hanford.

Here’s Hanford, printed by Hanford Engineering Works in 1944, provides new employees with a detailed map and lists all of the amenities to be found in the Hanford area, including beauty shops, grocery stores, churches, bowling alleys, movie theaters, etc.

Highlights of Hanford: Work for Victory, prepared by the Training & Relations Division of Hanford Engineer Works, is a slick pamphlet that visually promotes the comforts and recreation available at Hanford while providing answers to basic questions such as: Where will I live? Is the food good? Should I bring my family? When does my pay start? And so on.

Hanford is a pictorial record that documents construction of the Hanford Engineer Works during World War II. A handwritten annotation, presumably by Gilbert Church, states that this book was prepared in 1945, granted security clearance in 1956, and 15 copies were released and distributed in December 1957.

Souvenir Program Richland Day Sept. 2, 1946, published by the Junior Chamber of Commerce in Richland, Washington, documents the activities of the annual Richland Day celebration. The theme was “Goodbye DuPont, Welcome GE” as the site was officially taken over by its new contractor. Details of the festivities, the wartime history of the Hanford Engineer Works, and the planned peacetime operation of the site by GE, are included in this informative program.

In addition to the above items that were scanned and made available for this blog article, Hagley holds every issue of The Sage Sentinel, a weekly employee newspaper published by Hanford Engineer Works, from January 1, 1944 to February 9, 1945.

Other Hanford highlights held by Hagley Library include: a collection of photographs and films from the Hanford Engineer Works; the manuscript papers of Col. Franklin T. Matthias, commanding officer and area engineer of the Hanford Engineer Works; and finally, the Manhattan Project diary of Crawford Greenewalt, chief liaison for DuPont working with physicists at the University of Chicago Metallurgical Laboratory. Stop in at Hagley Library to learn more!