George May Phelps and the Magic of Smartphones

Are smartphones magic?  As you hunch over your smartphone and scroll through your social media feed, do you ever stop for a moment and think just how in blue blazes does this thing work?  Probably not.  That is until it doesn’t work.

Thanks to this job, I actually think about it a lot.  As I continue opening boxes and cataloging the Rothschild patent model collection, each day, I look at these steampunk-like contraptions and try to figure out how they work.  I am constantly amazed by the genius of some of these men and women and the lasting impact of those old jumbles of wood and metal.

One of these “magicians” was George May Phelps.  I recently discovered that Hagley owns the patent model for one of his most celebrated inventions, the Combination Printer.  Not only is it the ancestor to that printer sitting there in your office, but many of the devices so critical to our Information Age owe a debt to its inventor—including that smartphone glued to your hand.

In the age of the telegraph, there were two ways to receive messages: write them down or connect the telegraph to a printer.  The trouble was that both used Morse code.  At least one trained operator was needed to send and another to translate the message.  If the printer was used, another person called a “Grinder” turned a crank that powered the printer.  The printers were complicated machines that often broke down, were difficult to repair, and were expensive to build.

Phelps fixed all that.  An expert machinist who manufactured and assembled those ornery telegraph printers, Phelps was hired by The American Telegraph Company (later part of Western Union) in 1855.  They had recently bought the rights to a new type of printer and asked him to fix its problems.  He took the best of the old machine, some from the new one, and added components of his own.  In a rare moment of humility in the Age of Invention, he called it the “Combination” printer, thereby recognizing how the other machines influenced his design. 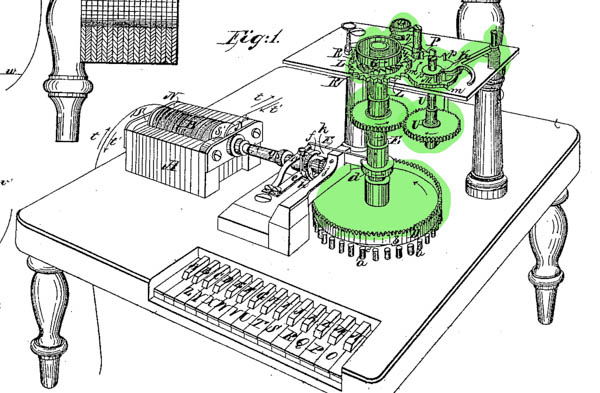 Phelps’ improvements increased the speed, reliability, and durability of the machine.  Best of all, no special operators were needed.  Instead of Morse code, it used a lettered keyboard, printed in regular type, and its powerful electromagnets could be hooked up to any power source.  It sent messages at about 60 words per minute on some of the highest traffic lines in the nation for decades.  Even after printing over 5,000 miles of paper, the components showed little wear.  One Phelps printer was still working into the 1920s!  Do you expect your printer to work for 50-plus years?

Phelps is remembered as one of the leading inventors of early communications components.  He worked closely with Thomas Edison—even going so far as to build some of his patent models.  Besides the telegraph, Phelps’ designs ensured the success of the telephone and the stock ticker.  Phelps even set New Yorker’s watches by creating a device that used a telegraph signal to drop the ball mounted on a pole high above the city skyline precisely at noon.

Phelps’ model for the Combination Printer—patent number 26,003 issued November 1, 1859—is currently on exhibit at the Design and Innovation Building on the campus of the University of California, San Diego.  Here is a link:  https://www.hagley.org/UCSanDiego.