The Gothic Bookshop, an independent bookstore of the Duke University’s group of stores, was one of the most creative and enchanting shops that Ken White designed. Originally opened in 1952, the bookstore was moved to the newly-built Bryan Center in 1982, and Ken White was asked to design the new bookstore. The bookstore’s theme was inspired by the many Gothic-style buildings on Duke’s campus in Durham, North Carolina.

In his book, Independent Bookstore Planning and Design (1992), co-authored with his son, Frank, and published by his own publishing company, St. Francis Publications, Ken White discusses his theories on design concepts and how a bookstore should “reflect the style and tradition of its surroundings.” A bookstore’s design image also should “convey the type and quality of the bookselling establishment,” as well as being “the underlying, guiding principal from which everything else evolves.” The Gothic Bookshop is included in this book, as well as several other bookstore designs.

A perfect example of Ken’s design concepts, the Gothic Bookshop, was truly an ethereal experience for book shoppers. The custom-built and hand-carved woodwork, designed by White himself, reflected the Gothic theme throughout the shop. The beautiful entrance to the store invited you into the fairy-tale interior.

White related in a phone conversation how he had quite a bit of research done on the Gothic style and medieval churches when he was planning this project. He discovered that, when stonemasons were building a church, their design included sculpted stone heads at the tops of the columns around the church. Those heads were of the patron, architect, stonemasons, and other important people. In keeping with that tradition, White had his own likeness, as well as others associated with the bookstore, carved at the top of the spiral design on the columns at the entrance.

The Ken White collection at Hagley includes the documentation for this project, beginning with a set of three possible studies for the entrance area.

Among the documentation for the Gothic Bookshop is the complete set of plans for the custom-built entrance, fixtures, ceiling, and other store furniture. Here is the plan and a close-up of the entrance design for the custom woodwork, which was done by Carlson Store Fixtures, Inc. in June of 1981. Ken himself initialed the plan to show his approval. 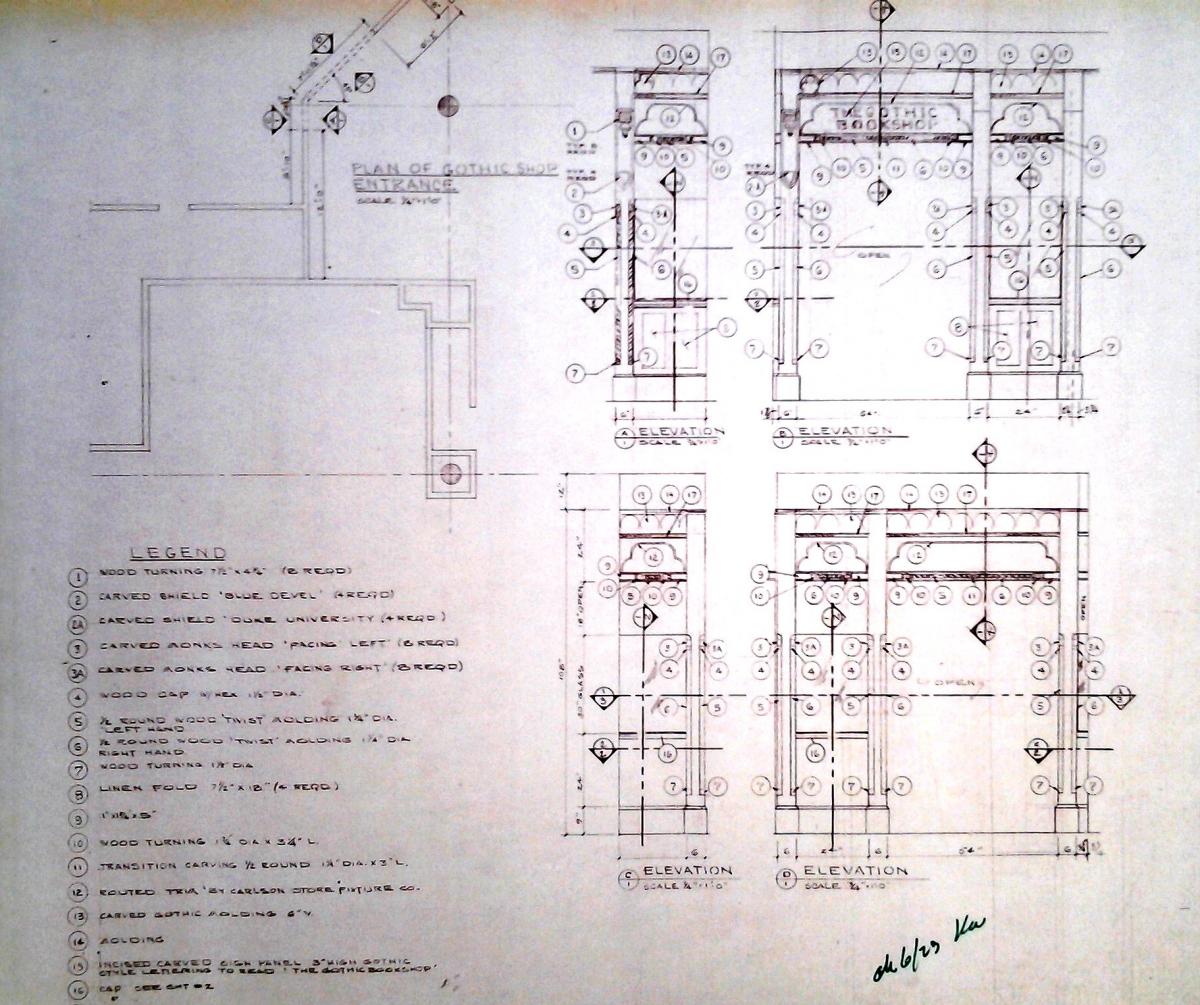 The Gothic Bookshop was much admired by everyone. So much so, that when the bookstore and the Bryan Center at Duke were renovated in 2013, they kept many of the beautifully carved elements of White's design and incorporated them into the new store design. You can see the elements from the original design in the new Gothic Bookshop featured on Duke’s website here.

Gail Stanislow is a Project Archivist at Hagley Museum and Library.