History of DuPont in Chile

In November 2012, a group of museum professionals from Chile toured Hagley Museum and Library. When shown some pictures of the DuPont Nitrate Company’s plants in Taltal, Chile, from the 1920s, Diego Matte Palacios, director of the Museum HIstorico Nacional in Santiago, told me that not much historical research has been done on business in that area of Chile. He was delighted to see the photographs in Hagley’s collection. Despite the bleakness of the desert environment of the nitrate plants, the images provide a good documentation of the extraction process. There are also images of the transportation and shipping of the nitrate from the port of Iquique. It turns out that what Senior Palacios saw here was only a small sample of what we have on Chile and the sodium nitrate business. Lammot du Pont developed B blasting powder in the 1850s, using Chilean sodium nitrate instead of the previously used potassium nitrate (saltpeter) from India. Sodium nitrate was less expensive and in good supply. The South American sodium nitrate industry grew rapidly in the second half of the nineteenth century, as it was not only a major ingredient in explosives but also in fertilizers. The War of the Pacific (1879-1883) was fought between Bolivia/Peru and Chile in large part over control of that industry. As a result, Chile took over possession of the Atacama nitrate beds. 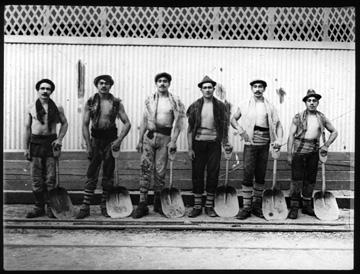 The DuPont Company initially procured their nitrate through importers in New York City. After the three cousins took over in 1902, Pierre S. du Pont and John Raskob traveled to Chile to study the situation. (A photograph album in the Longwood Photograph Collection documents that trip.) They determined that the company should establish an office in Chile and deal directly with suppliers there. Eventually, in 1909, they took the further step of purchasing nitrate mines and running their own company. This vertical integration gave them a less expensive and more reliable supply of this most vital ingredient for explosives, and was a great help in meeting the suddenly increasing demand created by World War I. After the war, however, synthetic sources of nitrate were developed, and explosives themselves moved away from the traditional ingredients into newer, more powerful formulas. The Chilean nitrate industry essentially collapsed overnight, and DuPont closed their mines in 1931. Today the region remains somewhat desolate. The very arid desert, however, preserves much of the abandoned buildings and equipment.

* Much of the DuPont in Chile story is told in the book Pierre S. du Pont and the making of the modern corporation by Alfred D. Chandler and Stephen Salsbury. Other sources on the Chilean nitrate industry and the War of the Pacific can easily be found online. See especially Paul Marr's "Ghosts of the Atacama: the abandonment of nitrate mining in the Tarapaca region of Chile".