Materiality in the Archives, or Why are Circuits Filed with Photographs?

Should you peruse the contents of the vertical files of the Public Affairs Department of the David Sarnoff Research Center (DSRC), you will encounter several folders filled with faxes. The Electrofax facsimile folders diverge from the vast majority of the pictorial materials from the Public Affairs Department, which otherwise consist of photographs, with a number of negatives, slides, and scattered documents directly relating to those images. The inclusion of facsimiles renders the Electrofax process uniquely self-documenting. 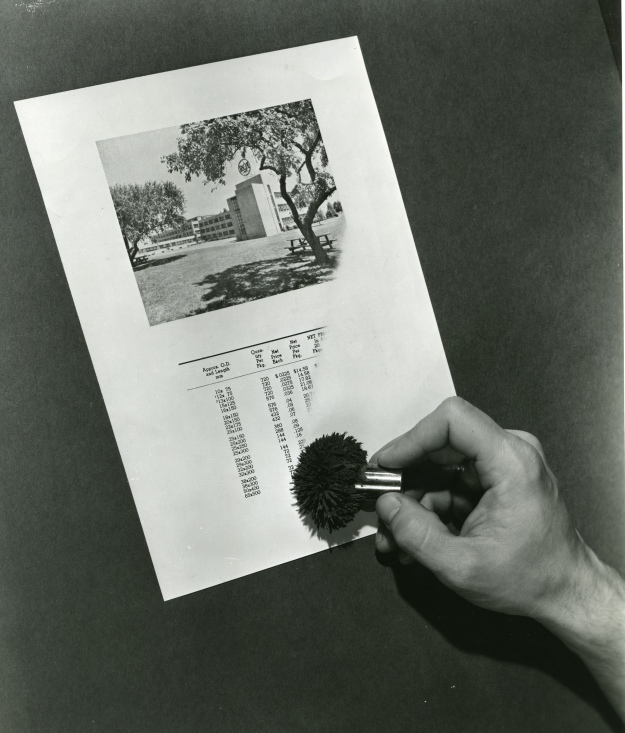 Application of resin powder and iron filings with a magnetic brush, 1956.

RCA had been in the facsimile business since before World War II and a number of technologies—Laserfax, Homefax, Ultrafax, and various scanners and receivers—appear in the files of the Public Affairs Department. In the 1950s, the company developed a new dry photographic process. Paper coated with a zinc oxide and resin substance was rendered photosensitive after exposure to an electrostatic charge. Exposure to light reduced the charge and created a latent image. An application of pigmented resin powder and iron filings brought out the image, which was then fixed by baking. The Electrofax process would remain in use, and the subject of continued research and development, for decades. 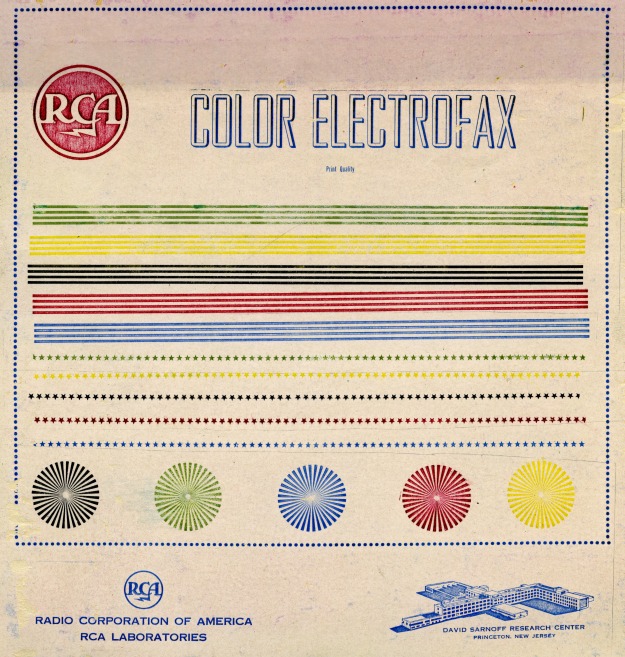 The Public Affairs Department kept several folders of exemplary Electrofaxes. A print quality sheet, with a range of colors and shapes, demonstrates the capabilities of the process. Gradients and fine levels of detail are visible in images of the DSRC and maps. Two pages are filled with repeating paragraphs of text, enumerating the specifications of the equipment used and allowing for the comparison of output with certain variables in play. 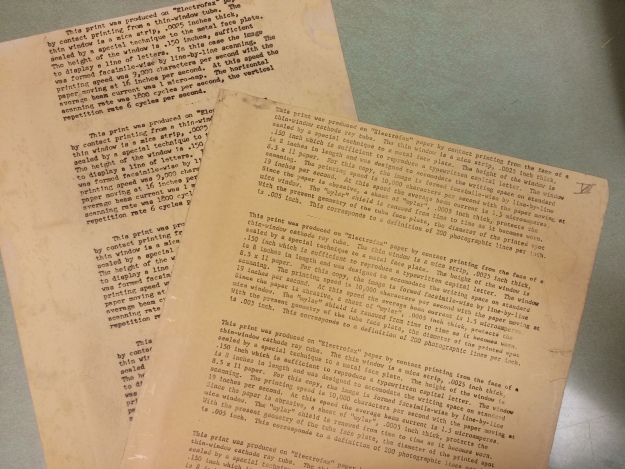 But the process was not limited to the reproduction of text and photographs on paper. Delineating patterns on a base, and then applying variable layers of another material, had other uses—and the most delightful artifacts are these “special applications.” The RCA logo is rendered in purple glitter, more reminiscent of a child’s art project than a serious corporate artifact. A metal name plate was printed for H. L. Donley (perhaps in appreciation for a 1955 technical paper he co-authored). Most substantial are the printed circuits, which entered the file with information about exposure time and other specifications for the equipment that created them. 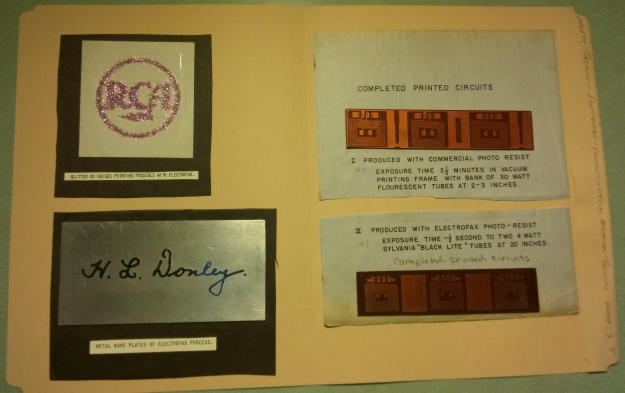 The word (or syllable) “fax” can easily evoke thoughts of an obsolete document transmission technology. Recalling that “fax” refers to “facsimile”—to a copy, rather than a temperamental office machine—is an invitation to consider the technical advances of the twentieth century, the ubiquity of copies, and the exploding number of ways in which information might be recorded and reproduced. Despite the word’s deep association with text, “print” fundamentally refers to an act of creation. Holding a printed circuit serves as a reminder of that fact and provides a valuable perspective on the history of technological development. If the Electrofax produced circuits in the middle of the twentieth century, it does not seem particularly bizarre that 3D printers can produce body parts in the twenty-first.

Megan Miller is a Sarnoff Project intern in the Audiovisual and Digital Collections Department.