The Most Unique Railroad of the World: the Pennsylvania Railroad 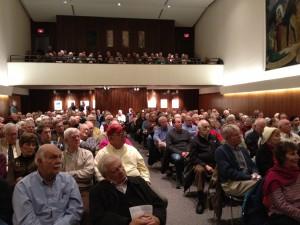 Two-hundred and seventy people jammed Hagley’s Soda House auditorium on November 15 to hear Al Churella discuss his recently-published book, The Pennsylvania Railroad, Volume 1: Building an Empire, 1846-1917. Churella, who teaches history at Southern Polytechnic State University in Georgia, built his talk around the claim, made in his lecture’s title, that the Pennsylvania Railroad (PRR) was the “unique railroad of the world.” The full lecture can be streamed or downloaded as a podcast by going to https://www.hagley.org/library/center/Churella_lecture.html.

While the PRR may have claimed to be the “standard railroad of the world,” Churella explained how its practice was in fact quite different than other railroads. The PRR’s unique character, he stressed, owed in large part to the particular geography and economic environment in which it operated. Spanning Pennsylvania and with branches stretching west to Chicago and east to New York City and Washington D.C., the railroad served as the largest shipper of raw materials and bulk manufactured goods from the Ohio Valley to the east coast factories and markets. It thus was the most densely used railroad in the world, measured by ton-miles per mile of route, and was for many shippers the only option for moving goods such as steel from eastern Ohio and western Pennsylvania.

Equally important for the PRR’s distinctiveness was an adept attention to politics. While in public decrying government involvement in transportation, the PRR was deeply engaged in ensuring that political leaders tilted the playing field in its favor, and did so with more finesse than the clumsy methods of bribery and corruption practiced by other rail lines. Indeed, their successful efforts to influence decisions by government officials at the federal, state, and local levels showed that “Pennsylvania Railroad executives clearly understood politics just as well as they understood railroading.”

Churella contrasted his largely positive evaluation of the PRR’s (and other railroads') effects on this country with the picture presented by Richard White in his recent book, Railroaded. While praising the book’s contribution to raising the profile for railroad history along with its meticulous research, Churella balked at White’s negative portrayal of the railroads' legacy. “In Railroaded, I saw a railroad industry that I knew, but did not recognize,” he explained. To capture this difference, Churella carefully detailed the economics behind the freight rates set by the PRR – and other railroads—a practice that White saw as evidence of exploitation and chicanery but that Churella explained was necessary for their survival, and ability to offer transportation options that stimulated growth and economic opportunity.

Al Churella closed his talk with some thoughts on the PRR in the twentieth century and the forces that led to its demise, a subject that he promises to deal with thoroughly in the second volume – to be published “in a few years.”

Roger Horowitz is the Associate Director of the Center for Business, Technology, and Society at Hagley Museum & Library.