Would you believe me if I told you that the pet food industry we know today likely wouldn’t be in existence if it wasn’t for lightning rods? Before you run off, exclaiming that the staff at Hagley have lost their minds – hear me out!

This story begins with a man named James Spratt, who was born in Exeter, Devon, England, but was a naturalized American citizen. Spratt lived in Cincinnati, Ohio, as a lightning rod dealer and manufacturer. According to advertisements from the time period, Spratt’s Patent Lightning Rods were far superior to other imitation products on the market. 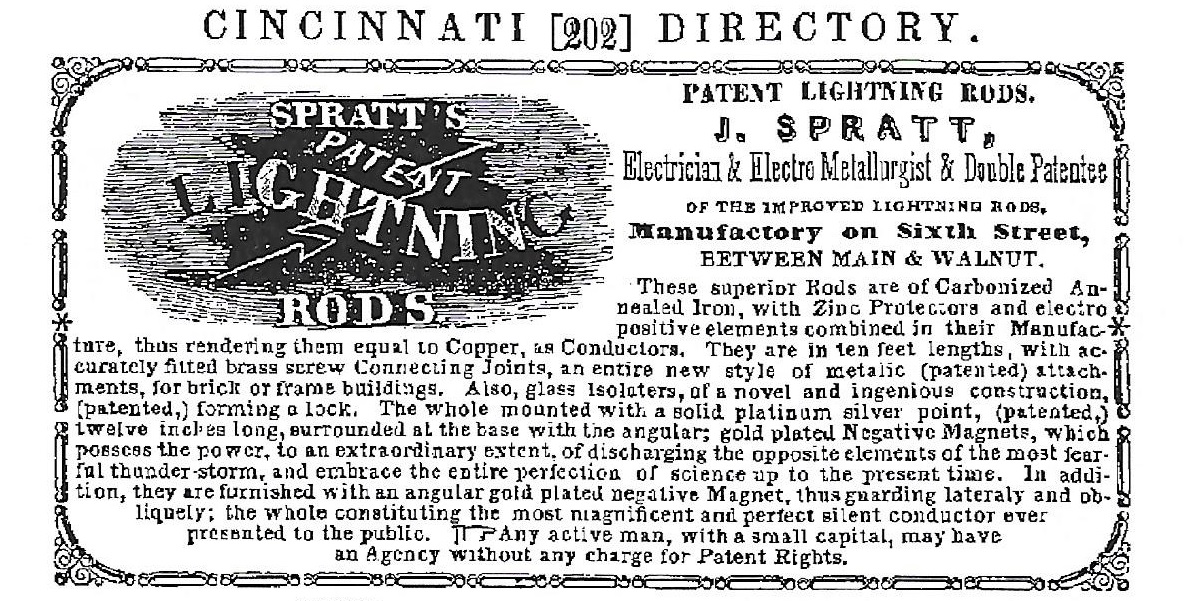 Spratt traveled to England frequently to market his patented lightning rods. On one such business trip, he observed sailors feed hardtack to scavenging dogs on the docks. Lightning struck inside Spratt’s mind: could he somehow market a similar product?

Turns out – yup, he sure could. In 1860 Spratt’s Meat Fibrine Dog Cakes were put on the market. This product was a huge hit with English country gentlemen, who used the dog cakes to feed their sporting dogs. His quality product was stamped with ‘SPRATTS X PATENT’, so that customers knew it was the real deal. By 1870, Spratt had marketed his dog cakes to the United States, and by 1881 he secured an American patent for them.

Spratt was a master marketer and advertiser. He found ways to sell a product to dog owners that they didn’t necessarily need (many had no issue in just feeding their dogs table scraps). In the U.S., Spratt exhibited at the 1876 Centennial Exhibition, giving out free samples. He appealed to the American Kennel Club, appearing on the cover of their January 1889 journal. Spratt also appealed to health conscious owners and introduced the idea that there were appropriate foods for different dog life stages (i.e. puppy, adult, senior).

It may surprise you to know that we don’t have any patent models related to Spratt’s Patent Lightning Rods or his Dog Cakes. So how do we know what we know about him? Our jumping-off point is another of his business endeavors (busy man, right?). Below, you’ll see an image for a patent model of Spratt’s Improvement in Hermetical Sealing, dated July 18, 1854.

Spratt patented at least 3 inventions related to food preservation in jars, in which he removed the necessity of soldering the lids on by introducing a rubber gasket and cement process. While Spratt’s cans were not tremendously successful, other inventors built off his ideas. For example, John Landis Mason would patent a jar with a rubber gasket in 1858.

A Special thank you to Trudi Koston, Museum Research Volunteer, for this wonderful information on James Spratt!

Caroline Western is the Assistant Curator, Patent Models at Hagley Museum and Library.