Back in 1979, with sequels in 1994 and 1995, there was a wonderful TV series presented by James Burke called “Connections” that led viewers on a path to show how interconnected everything is in surprising ways.   The show’s focus was on the history of science and invention.  Each show started someplace and ended up somewhere else.  If you hadn’t gone through the journey, you would have never guessed what the connection was.  I am constantly reminded of this show when researching Hagley’s patent models because each model’s story goes to unexpected places some more surprising than others.

This Victorian piano-stool model is a great example of connections.   What is novel about this stool is indicated by the foot pedal.  According to the patent:  “This invention consists in the application of the principle of hydrostatics for elevating or lowering the seat of a piano-stool, whereby the performer may be raised or lowered on the seat, without rising from it, by the action of the foot…”   This is seen frequently in patents with inventors applying known or new technologies to items that would have been at the time unexpected. 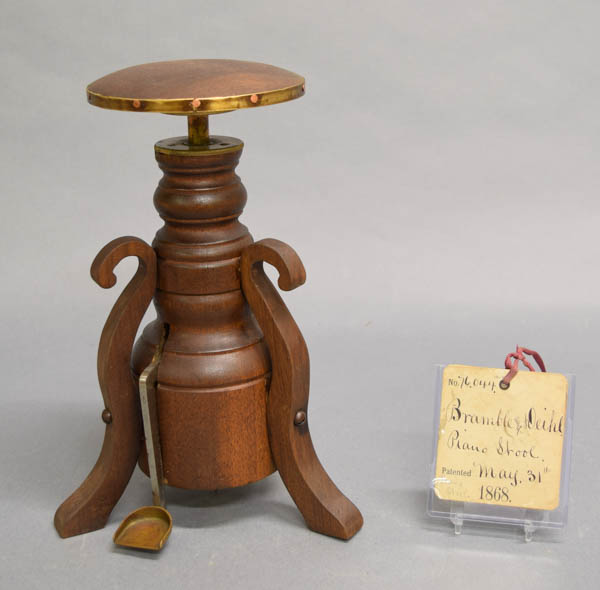 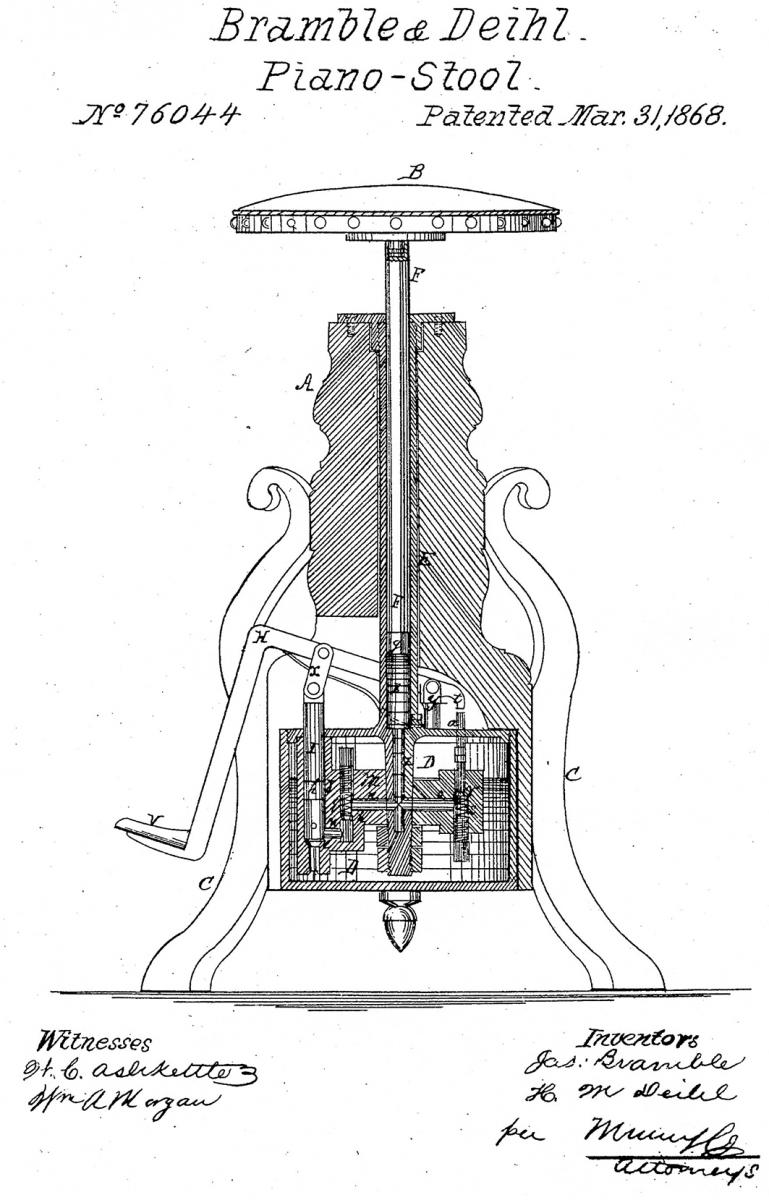 Originally from Pennsylvania, both Bramble and Deihl eventually made their way to Fort Wayne, IN.  Deihl worked for many years as a Pennsylvania Railroad machinist which gave him the mechanical skills needed to create this invention.  Bramble probably made the patent model since in the 1870s Fort Wayne City Directory; he listed himself as a model maker.

Ten years later, Bramble has moved to Philadelphia and they resubmitted their patent with improvements. It is then re-issued as #8,294 on June 25, 1878. Generally this happened when the patentees either recognized that something did not work correctly or they decided they could make it better.  The reissued patent enabled “the adjustment of the seat easy to the operator, noiseless, and free from shocks, jars, or unpleasant feelings to the occupant….”

What I find most interesting is who they assigned their rights to.  Initially they went to John F. Paret of Washington, D.C. who then assigned them to Samuel S. White of Philadelphia, PA.  White founded the S. S. White Dental Manufacturing Company which was one of the largest manufacturers of dental equipment and supplies.  Adding hydraulics to dental stools had great potential.  I located three patents for dental chairs which cited their chairs were improvements on Bramble & Deihls’ patent.   This then is the forerunner of modern dental chairs.

Now we bring the story full circle and back to Hagley since our library has the S. S. White Dental Manufacturing Company records.  So we went from a charming Victorian piano stool to modern dental chairs and finally back to Hagley – quite the journey!

Debra Hughes is the Curator of Collections & Exhibits at Hagley Museum and Library.