Paging Doctor Thornton: New Discoveries about the First Superintendent of the Patent Office in Hagley’s Collections

As a recent hire, I am still becoming familiar with Hagley and its collections.  Sure, I spend most of my time laser-focused on patent models, but the models are only a part of the museum collection.  And I have not had the opportunity to explore the library collection.  That all changed after a random database search that served as an example of the richness and depth of Hagley’s holdings.

At the time, I was working on a presentation and researching the first Superintendent of the United States Patent and Trademark Office, Dr. William Thornton.  Who is Thornton?  To even touch upon his biography would take up too much space. He had a Forrest-Gumpian talent for being present at important moments during the formation of our early republic which warrants a book of its own.  For this article, it is my research into an object in our museum associated with him that established a surprising connection between Thornton, the DuPont Company, E.I. du Pont, and Thomas Jefferson.

It all started when, on a lark, I simply typed Thornton’s name into our museum collection search engine.  To my astonishment, we had an object associated with him in the collection!  It is pictured here.  It is a tiny, three-inch tall tin container with a label that reads: 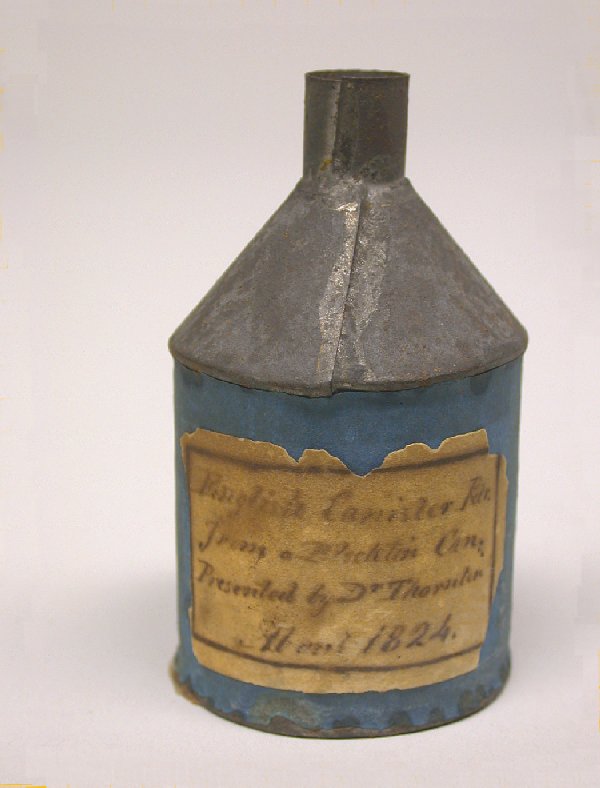 This container entered Hagley’s collections through the old DuPont Company Museum.  How did it get there? Who did Thornton send this to and why?  Did it contain a sample of powder for testing, or was the container itself unique enough?

All these questions inspired me to do some more digging.  Unfortunately, there was little information in the museum object files.  If this was presented to the DuPont Company, was there any other documentation in the company’s archives?  If I struck gold in Hagley’s collections once, could it happen twice?

Spoiler alert: Yes!  Just like before, I typed Thornton’s name into a search engine.  But this time, I focused on the library’s holdings.  Not only was there a book in the stacks written by Thornton with a personal dedication to E.I. du Pont, but the archives contained 16 letters written by Thornton to E.I. and others in his circle!  Could these letters provide any information about the powder container?

Well, no.  But the letters did highlight a shared interest between Thornton, E.I., and Thomas Jefferson.  While I already knew Thornton advised E.I. on his patent application for a gunpowder graining machine and that Jefferson was critical to helping E.I. with his gunpowder business, the letters proved there was more of a personal connection between these three men.

The focus of that connection was the breeding of merino sheep.  All three were passionate about these animals and the potential for developing a domestic market for their wool.  Thornton stated that Jefferson was sending “a thoroughbred ram to every County in Virginia.”  E.I. allowed his prized rams Don Pedro and Don Ferdinand to pay conjugal visits to Thornton’s flock.  Thornton, who, in addition to being a physician, knew a great deal about animal husbandry and veterinary care.  He offered E.I. advice on how to care for Don Ferdinand after he became ill.  Thornton also received a gift of French sheepdogs from Jefferson and promised to set aside one for du Pont.

Thornton shared some rather interesting viewpoints on Jefferson’s mountaintop home, Monticello.  I shared the existence of these letters and Thornton’s impressions with the folks at Monticello.  They were thrilled to hear about the letters and requested digital copies.  Hopefully, together our two institutions can continue to reveal new information about the relationship between these three men who contributed immensely to the growth of American industry.

And it all started when I simply typed “Thornton” into our search engine.  Who knows what new connections we can trace?  Isn’t technology grand?