Photographer William M. Rittase and his iconic image of the ENIAC

The history of the early computing industry is well documented at the Hagley Library, but the collection of the UNIVAC Division Records from the Sperry Rand Corporation, stands as our most significant source. Among the collection are records of the UNIVAC, the first commercial computer system.

The Sperry Rand collection also contains the records of the Eckert-Mauchly Computer Corporation (EMCC), the company that developed the technology that served as the core of the UNIVAC.**  Incorporated in 1947, the EMCC was founded by J. Presper Eckert and John Mauchly, the duo that had led the ENIAC project for the U.S. Army during World War II. The ENIAC, built over the course of two years at the University of Pennsylvania, is widely considered the first general-purpose digital computer and the point of origin for the digital revolution. One of the standouts of the Eckert-Mauchly Corp records is this well-known photograph of the ENIAC: 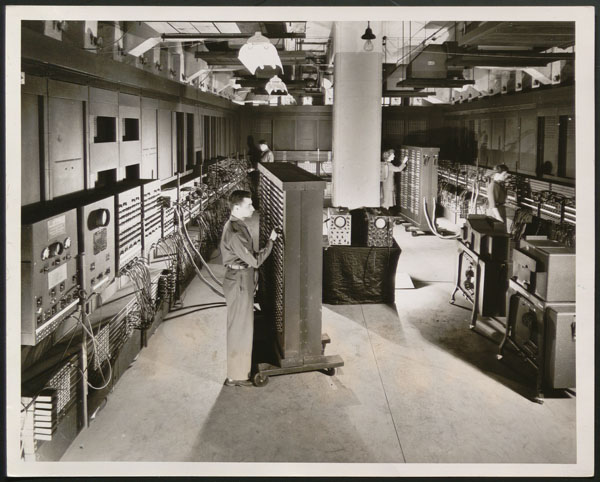 When the New York Times published the first account of the ENIAC for a general audience on February 15th 1946, the above photograph accompanied the article. The photo has been re-published, broadcast, and disseminated thousands of times since, but credits for the image have varied over the years and have never properly credited the photographer. The photograph print in the Hagley collection comes from a source that is as close to the original as you will find. How do we know? Here is the reverse of the Hagley print: 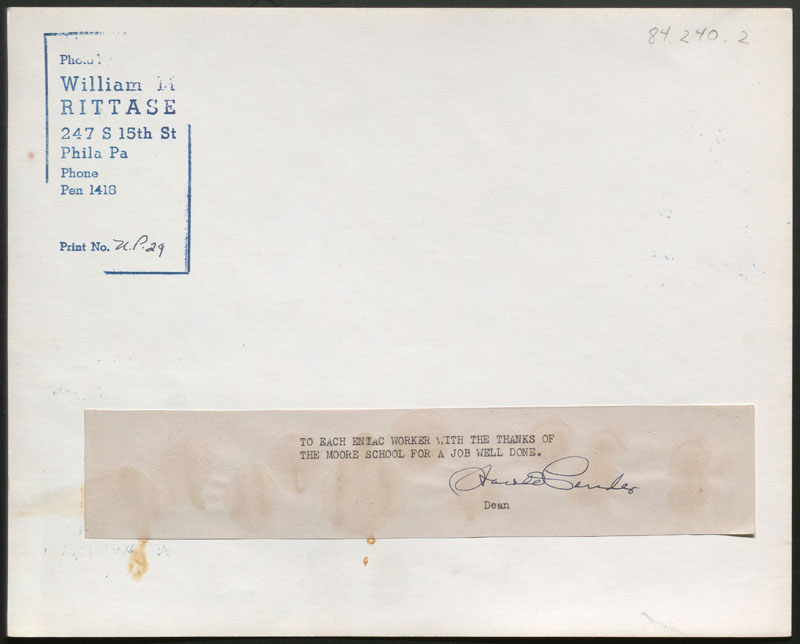 The reverse includes a photographer’s stamp and an inscription. The inscription is a note of thanks to those who worked on the ENIAC signed by Harold Pender:

Pender was the Dean of the University of Pennsylvania's School of Engineering, the home for the ENIAC project and where both Eckert and Mauchly were professors. Based on the inscription, we can assume Pender presented these photographs as gifts to those connected with the ENIAC at the conclusion of the project. The photograph in the collection at Hagley was the one possibly presented to Mauchly or Eckert.

While the inscription from Pender is interesting and offers great provenance info, it’s the photographer’s stamp that provides the name of a long uncredited source: 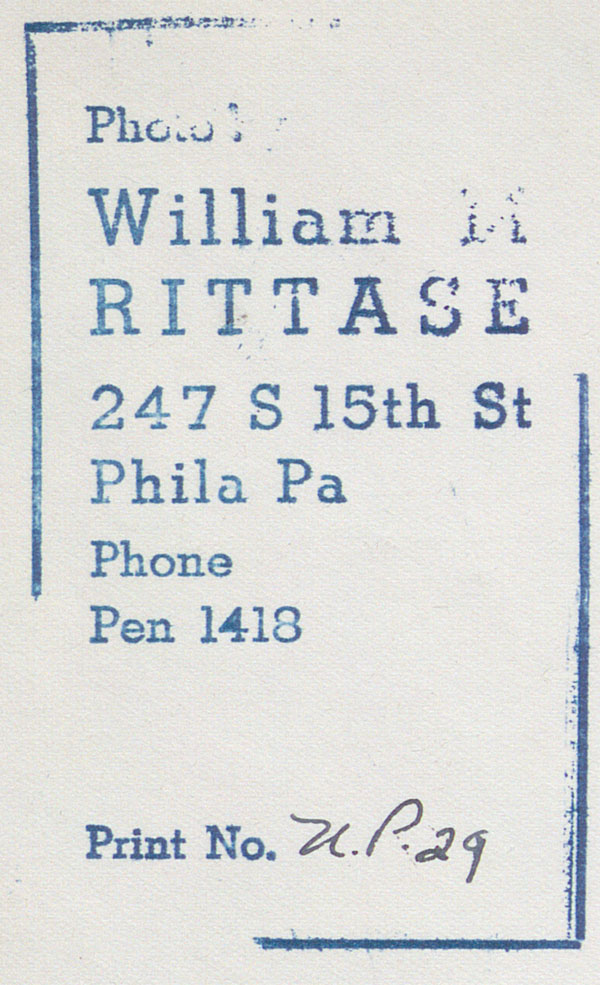 William M. Rittase was a commercial photographer based in Philadelphia who has proven an elusive figure in my attempts to research him over the past few years. Rittase was a contemporary of Margaret Bourke-White, and his work shares a similar aesthetic with Bourke-White, who is best known for her depictions of industry and industrial processes. Both photographers worked for Fortune Magazine during the 1930s, the publication that brought these new artistic depictions of industry to a popular audience. In 1932, Rittase was among a small group of photographers included in an exhibit at the Museum of Modern Art titled Murals by American painters and photographers. The exhibit was among the first to deem commercial industrial photographs worthy of inclusion alongside more traditional art subjects.

Here is the biographical information included in the MOMA catalog for the mural arts show:

"William M. Rittase, photographer. Born in Baltimore, Maryland, 1894. Studied at the Maryland Art Institute. [He] was an engineer for ten years and a Captain of the Artillery during the War. Professional photographer for the last five years."

This happens to be the only source that I could find that includes details about Rittase’s early life. When he died in 1968, his obituary included nothing about his education and only mentioned he was a veteran, with no information about his rank or his role in the military. The brief obituary says of his career simply: "He was a self-employed photographer until his retirement a number of years ago."

What can be found in the record between the MOMA exhibit in 1932 and his death in 1968 is sparse. We find him in photo credits from newspapers and in announcements for photography classes he conducted or photo contests he judged for local camera clubs in and around southeast Pennsylvania. In 1937, The Detroit Free Press published a story about photography awards from a publication called Camera that included a photograph by Rittase alongside fellow award winner Dorothy Lange and her iconic Migrant Worker image.

In Hagley’s collections, we have photographs Rittase took for DuPont, Budd Company, and Sperry-Rand. We also know through collections at other archives that he did projects for the University of Pennsylvania and Harvard University.  In 1933, he produced images at the Century of Progress International Exposition in Chicago. His images can be found in a few art museum collections throughout the U.S., but (as far as I know) a large collection of his photography never landed in a public institution.

While details of Rittase’s life are elusive beyond the evidence of his prolific career as a commercial photographer, the skill and artistry of his photographs is undeniable. In 2001, when the Philadelphia Museum of Art exhibited selections from art dealer Julien Levy’s collection of 20th-century photographs, Philadelphia Inquirer art critic Edward Sozanski wrote that, while the exhibit included many well-known photographers, he found himself paying more attention to the relatively obscure Americans. Among that group, the first name he mentioned was Wiliam M. Rittase.

The full picture of William Rittase’s life and photography might never be fully known. That is why I was thrilled to find his photographer’s stamp on one of the 20th century's most iconic images of the ENIAC, adding a small but significant bit to his story and adding attribution to Rittase that is long overdue.

** Remington Rand purchased the EMCC in 1950. Remington merged with Sperry in 1955 to form the Sperry-Rand Corporation.

The ENIAC image in the Hagley Digital Archives

Catalog for 1932 MOMA "Murals by American Painters and Photographers" exhibit