Quantifying Color - The Munsell Color System and the ISCC Collection

I acquired my first Munsell Soil Chart during archaeology field school in upstate New York back in 2003. By matching soil samples from the layers of dirt we excavated to colors on the chart, our team could infer the composition of soils, the geological history of the site and what to reasonably expect to find lurking below our feet. Flipping through the Munsell chart, I couldn’t help reflecting on the Goethe color wheels I’d painted in grammar school art classes, with their watery hues bleeding from one tone to the next in a rainbow continuum of yellows, reds, purples and blues. 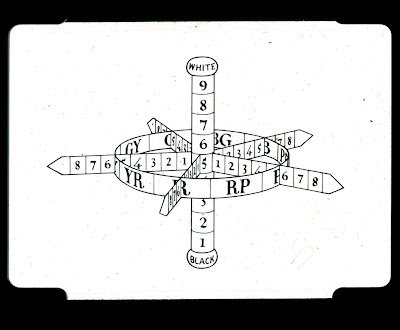 The description of a soil color or the painting of a color wheel relies on a hybrid of technical production and subjective vision. Goethe contributed to color theory an element of human experience, a corporeal subjectivity that Newtonian models had previously ignored. For Goethe, the perception of color was linked directly to the subjective perception and conditions of the human eye and mind. Wittgenstein is a better judge of this than I, but Goethe, I think, was most interested in expanding optical explanations of light into the subjective observations of human observers, thinking particularly about how these phenomena can be translated into the ways we experience and describe color and light through art and science. A. E. Munsell, in his work as an oil painter and later as a color theorist and researcher, was able to connect these seemingly disparate notions in color theory in the Munsell Color System. He was interested in sight, studying, particularly, color blindness and even creating a series of crayons.

The fact that color is measurable at all is in large part due to the efforts of research organizations in the early 20th century which, in an effort to streamline business practices and manufacturing techniques, came together to agree upon common terms with which to measure and describe color. A key moment in this process occurred with the formation of the Inter-Society Color Council in 1931. From the outset, the ISCC played an important role in unifying the measurement and control of color in America. Today, using computers and a range of high-tech optical equipment, color standards agreed upon by ISCC member bodies help manufacturers determine a host of things from the color of your Levis to the calibration of computer screens. With such broad appeal, the ISCC has attracted members from all corners of science and industry including Dupont, Hallmark Cards Inc., Hewlett Packard, Konica Minolta and Xerox. The papers of the Inter-Society Color Council came to Hagley a number of years ago and recently a series of print and photographic materials from the ISCC Collection has been processed and made available through the Hagley Library Pictorial Collections Department. Included in this collection are slides, prints, correspondence and films relating to all aspects of the Munsell Color system. Also included in the collection are pictorial and other paper items from Dorothy Nickerson, an early member of the ISCC board, who worked in the laboratory of the  Munsell Color Company in the 1920’s and later developed color standards for the US Department of Agriculture as a color technologist. 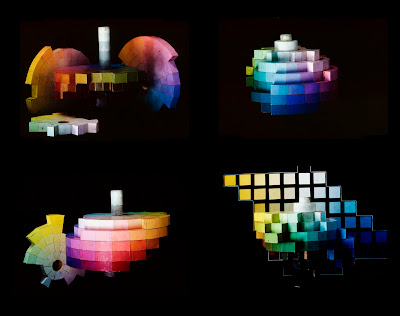 Below is an image from the collection depicting Munsell and family observing his patented Color Sphere in action. Originally an accomplished painter, Albert Munsell originated a system for describing color in 1899. The Munsell Color Sphere is a physical model he created which shows color values from black to white (the north and south poles), and is divided like an orange, each slice representing a different color, or hue. Eventuall, Munsell evolved his sphere to include additional factors depicting the intensity of the colors, represented on the horizontal axis, which is why in the above image there appears to be a malformation in the sphere. Hue, chroma, and value; three vectors determining how a color appears in daylight. 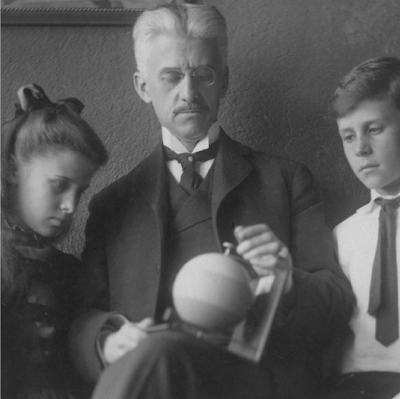 By Christopher Chenier, University of Delaware