In November I was given the task to process a collection of advertisements related to consumer electronics. The Alexander Magoun advertising collection includes ads from RCA, Motorola, General Electric, and other companies ranging in date from 1888 to 1989.

From processing other collections for the David Sarnoff Library Project I knew that RCA was involved in a range of projects including gas lasers, color televisions, and semiconductors but I had not yet read anything about their involvement with household appliances. After pulling out any advertisements that were related to large appliances, putting them in chronological order, and doing some research the placement of these household appliance advertisements became clear. 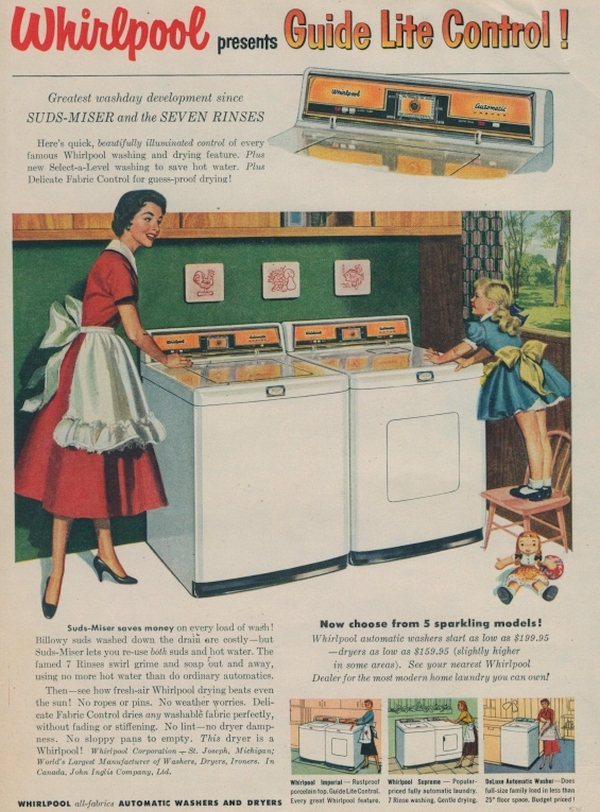 In the early 1950s RCA began to expand its line of consumer electronics to include other electric household appliances. RCA purchased the Estate Heatrola Division, which made gas and electric ranges along with space heaters, from the Norman Electric Corporation in November of 1952. That same year RCA introduced their own line of dehumidifiers and air conditioners.

In 1955 the Radio Corporation of America’s Estate range and air conditioning divisions merged with the Whirlpool Corporation. As part of this merger Whirlpool was given the right to market “RCA Whirlpool” appliances through the mid-1960s.

Finally, the image on the right from 1968 demonstrates the name change following the end of the trademark deal. No longer toting the RCA Whirlpool brand name or RCA trademark information, the Whirlpool Corporation is linked to the product in the advertisement and on the unit. From these three advertisements a rough timeline of RCA’s involvement with household appliances can be determined and with the assistance of other documents the RCA-Whirlpool merger can be understood.

Through the examination of its large array of materials, the Alexander Magoun advertising collection not only provides an opportunity to see how advertising and products have changed, but also allows researchers to track modifications in the company through the interrogation of advertisements. Although supplementary materials are necessary to learn about the company and their products, these sources provide visual representations of the changes that took place between 1952 and 1966.

Ashley Giordano is the 2015-2016 David Sarnoff Library collection processing intern in Manuscripts and Archives. Ashley has a B.A. in history from Saginaw Valley State University and is currently a M.A. student and Hagley fellow in the History Department at the University of Delaware.