This past summer, as the David Sarnoff Library collection processing intern for Manuscripts and Archives, I have encountered papers that required me to learn about satellites, ferrites, lasers (do you know how many different kinds there are?) and integrated circuits. I’ve processed records on the history and organizational structure of the RCA Laboratories, and those of its corporate culture. And, honestly, I’ve enjoyed it all. However, one of the most curious pieces I’ve encountered is a 1928 book entitled Radio in the time of King Tut-ankh-amen by G.H. Clark. This self-assembled, but professionally-bound, sketch is 38 pages of text and 47 illustrated plates of good, old-fashioned 1920s’ fun. Clark wrote it based on a burlesque roast he gave in honor of Sarnoff at a 1924 meeting of the Static Club. And while we will have plenty to discuss regarding this oddity, a bit of attention must first be paid to the organization that led to its creation.

In May of 1921, David Sarnoff’s business associates at RCA threw him a party at the Hotel Astor. Thoroughly enjoying themselves, they decided to form a club as an “avenue of social communication between the men of the Company.” Although any man with RCA for more than a year could become a member of the Static Club, the company’s leadership dominated the club’s roster. The Static Club held its first meeting on September 8, 1921, at the Hotel Astor. Dinner cost $3.50 (about $40 in today’s prices) and was followed by a musical performance by two club members, and a talk given by Mr. Winterbottom of his recent trip to Europe. Like any good social club of the 1920s, after-dinner activities often had a carnivalesque air to them, as can be seen in this notice in RCA’s “World Wide Wireless,” issued in February 1922:

Sixty-four members attended the February dinner at the Hotel Astor, New York City, and it proved to be the most enjoyable yet held. Mr. Porter made his first appearance as president and charmed everyone by his versatility, tact and ready wit. Impromptu songs by a quartet consisting of Messrs. Sarnoff, Weagant, Kaminsky and MacConnach provoked roars of merriment. Mr. George Clark gave an illustrated talk on Venezuela, which was most entertaining, many of the pictures being most artistic. Mr. Hayes personated a Venezuelan general, wearing a gorgeous native costume and created much amusement. The evening closed with Venezuelan piano music by Dr. Goldsmith and by a unique act by Mr. Clark, who played several selections on an ordinary hand-saw. The evening was thoroughly enjoyed by all, and the best of good-fellowship prevailed.

Along with such jocularities, burlesque roasts of one’s superiors became standard fare at Static Club meetings, and they bring us one step closer to Radio in the time of King Tut-ankh-amen. But first, a stop-over in Egypt…

On November 25, 1922, Howard Carter and Lord Carnarvon discovered the tomb of the pharaoh Tutankhamen. The spectacular and unprecedented tomb consumed the press for almost two years, as Egyptologists continued unearthing astonishing finds. In the United States, Egyptian motifs appeared throughout popular culture as cartoons and clothing styles, and in music and advertising, and served as the basis for Art Deco architecture and decorative arts. In the midst of the craze for all things Egyptian, George H. Clark first performed Radio at a Static Club meeting in 1924. The skit must have gone over well, for by the time Clark gifted the book to Sarnoff, he noted it had “been given perhaps a hundred times.” Certainly hearing and seeing themselves portrayed as pharaohs and gods spoke to Static Club members’ sense of importance. In 1924, the Radio Corporation of America controlled the most innovative and influential communication technology the world had seen since the invention of the printing press. With an eye to the future – television was already in development at RCA – the men running the company certainly must have seen themselves as visionaries presiding over a new electronic dynasty. Of course, building a new world required moments of levity from time to time, which brings us, finally, to Radio in the time of King Tut-ankh-amen.

In Radio, Clark’s satirical narrative weaves fiction into reality using two themes: the existence of radio in ancient Egypt and the contemporary personalities, occupations, and relationships of RCA corporate culture. RCA becomes RCE, or the “Radio Corporation of Egypt,” Sarnoff is “the god Sarnoffris,” and competitor Westinghouse is “West – Sting – Domicile.” The illustrations – photographs, of pencil drawings, shaded with colored pencil – combine authentic hieroglyphs with the imaginary, allowing Clark ultimate creative license to come up with verse that still amuses today. An example of this is Plate VIA: 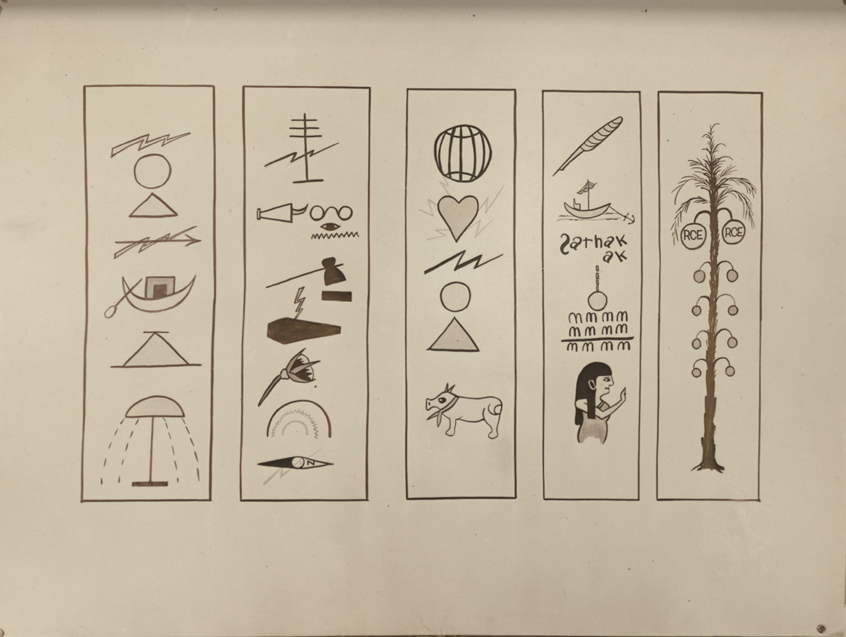 As with most satire, contextual knowledge of those being satirized was essential; few of us would recognize Ray, Adams, or Brunet from the previous verse, for example. However, some cultural tropes last longer than others and several of Clark’s commentaries, including that on advertising, is still recognizable today. In Plate XXVII, we see a “typical dealer’s window” selling “R C E” products, in it hangs a poster of a “beautiful Egyptian maiden” advertising the Radiola XX.

Clark notes that the poster is an “example of art tendencies these days,” in which “even the most skilled artists” do not “deem it prostitution of their art to produce posters for commercial purposes.” As the modern world saw more artists entering the commercial world of graphic design and advertising for the first time, Clark’s critique speaks to reconciliation between the old and the new in the 1920s, and offers a glimpse of a cultural eddy in the waters of modern capitalism. 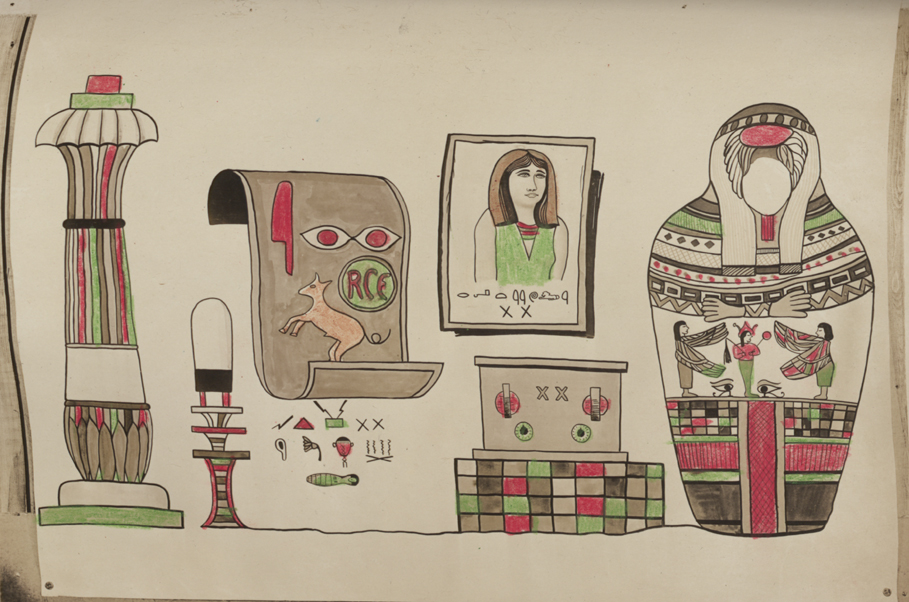 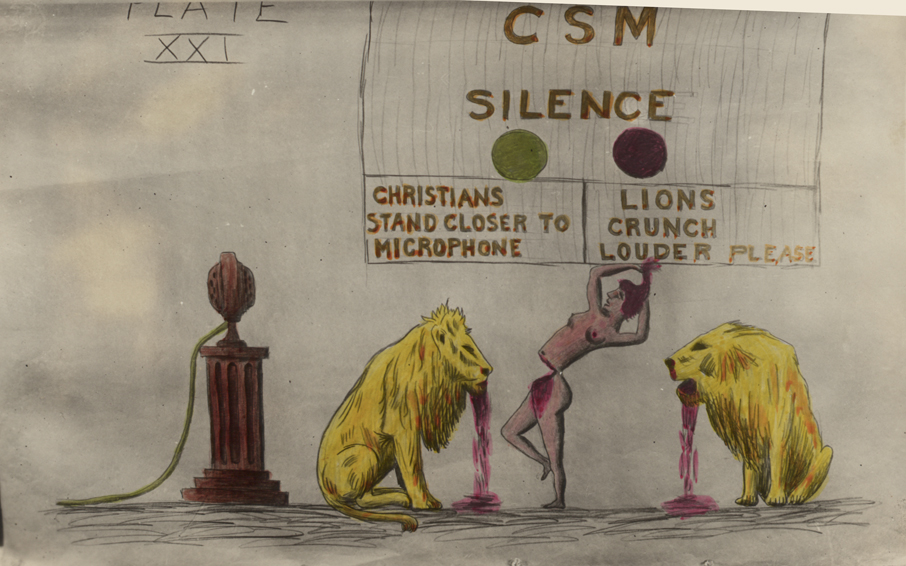 Clark’s six final plates move radio out of Egypt, through Rome, Greece, Soviet Russia, RCA executive and “static-eliminator” Dr. Alfred Goldsmith’s lab, and into the present, ending with a modernist rendering of radio à la Joseph Stella. While each merits examination, I must return to my processing duties, so I will leave you with a stop at the Roman coliseum. In Plate XXI, the radio prompts request “Christians, please stand closer to the microphone,” and “Lions, crunch louder please.” We can only hope that, for the Static Club, this illustration came after dinner, so they could enjoy it as denizens of the up and coming world, with digestif in hand.

Rachael A. Beyer is the 2014-2015 David Sarnoff Library collection processing intern in Manuscripts and Archives. Rachael has an M.A. in history from Iowa State University and is currently a Ph.D. student and Hagley fellow in the History Department at the University of Delaware, where she studies radio and youth communities. Rachael recently processed and digitized the Anna C. Wilson collection at the Historical Society of Cecil County (Md.).