James Cameron’s blockbuster hit, Titanic, popularized the origins of the S.O.S. distress call, showing young wireless operators Jack Philips (25) and Harold Bride (21) tapping their pleas for assistance deep into the night. Finally, they reached the Carpathia, which arrived hours after the sinking to rescue 705 survivors.  As Cameron was aware, the Titanic was equipped with a Marconi wireless telegraphy set, and both its operators were employed by the Marconi Company, and not White Star Line. Hagley now holds a small part of this story, in the form of over a thousand engineering drawings and design schematics from the Marconi Wireless Telegraphy Company of America, a part of the David Sarnoff Library collection.

Guglielmo Marconi [first name pronounced as: gool-YELL-moe] created his first transmitter-receiver in 1894 at 20 years old. In 1897, Marconi founded the Wireless Telegraph & Signal Company in London; expanding quickly overseas, the Marconi Wireless Telegraph Co. of America (MWTCA) was chartered in 1899. The company’s priority was creating wireless capabilities for ships and shore – it was this campaign which led to a Marconi radio on the Titanic in 1912.

The sinking of the Titanic was crucial for helping the public understand the importance of wireless technology, especially at sea. The British Postmaster General famously said, “Those who have been saved, have been saved by one man . . . Mr. Marconi and his marvelous invention.”

The United States responded with the Radio Act of 1912, making licenses mandatory for radio operators, and mandated ships continuously monitor for distress calls. While there aren’t any schematics of the actual equipment installed in the Titanic, the collection does reflect the rapidly expanding field of trans-Atlantic and marine wireless radio communications; most of the drawings are related to sea-radios in some way, and over a hundred drawings are specifically to fulfill contracts with the U.S. Navy, plus over fifty more for the U.S. Army Signal Corps. 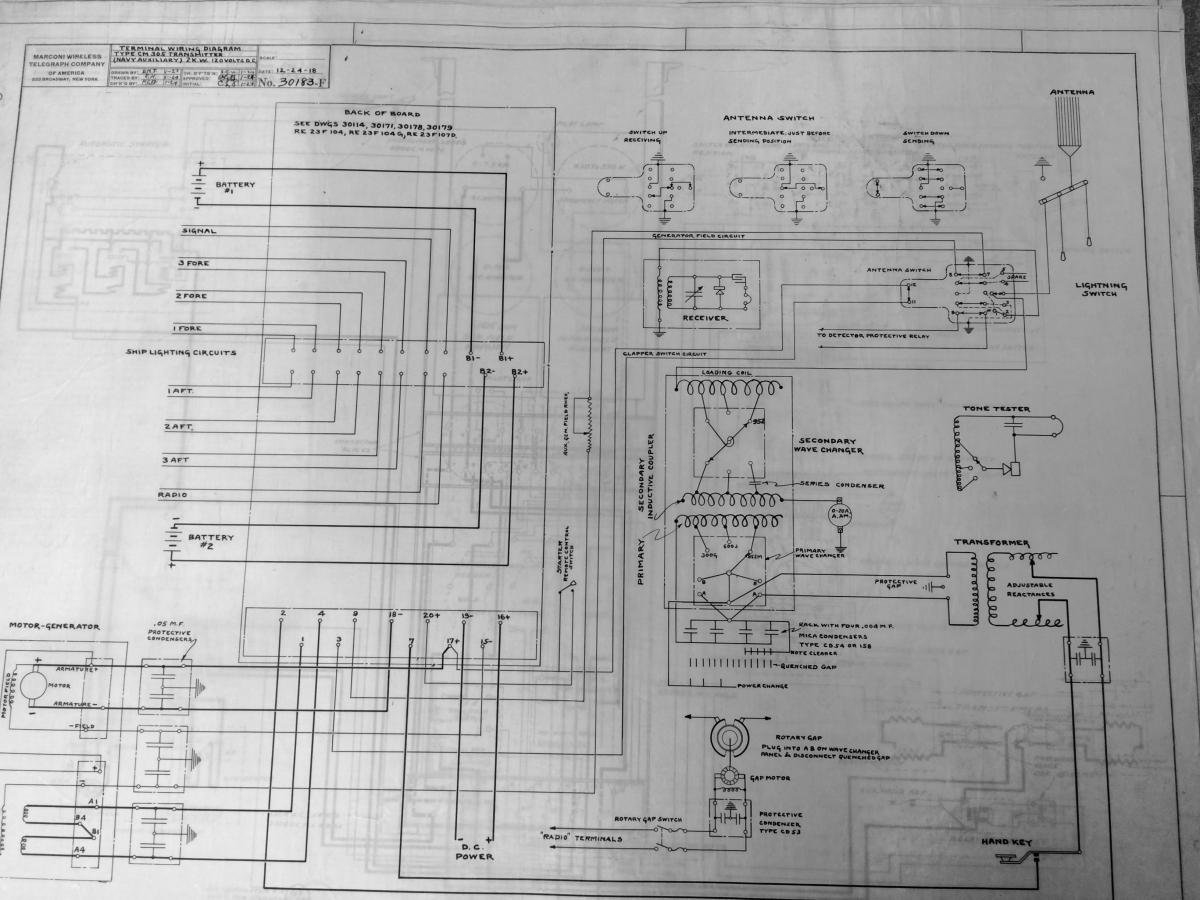 Hagley holds 1300 engineering drawings from the Marconi Wireless Telegraph Company of America. Nearly three quarters of the drawings date 1917, 1918, and 1919 with the period 1905-1916 comprising the final quarter. From 1905-1916 represents the final quarter. Geographically, the majority seem to have been produced at MWTCA facilities in New York and New Jersey. However, they depict projects all over the world: Juneau, AK; New Orleans, LA; Havana, Cuba; San Antonio, TX; Argentina; Brazil; Honolulu, HI; and the U.S. Philippines, among others.  The drawings range in subject from circuit diagrams, wiring layouts, and switchboard schematics to architectural plans for aerial towers and carrying case designs. 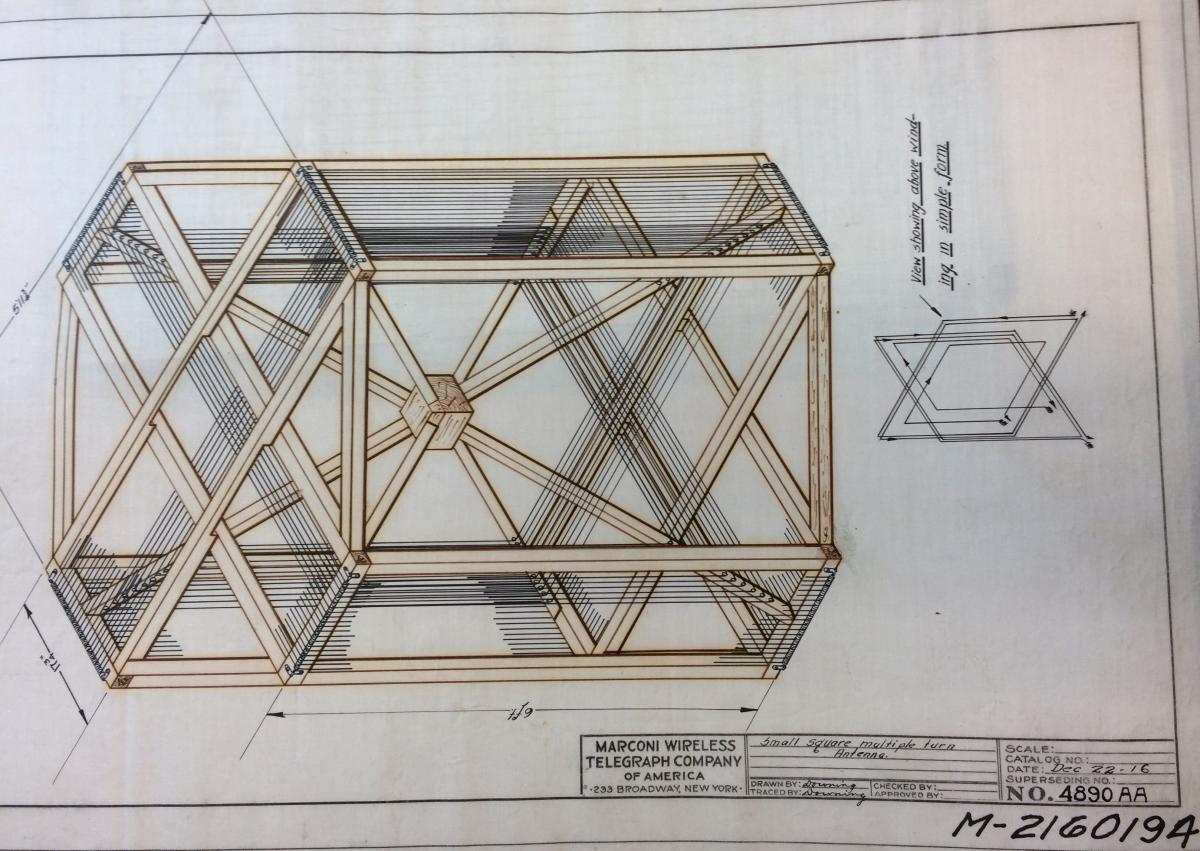 Edmund A. Laport, retired RCA engineer, looked over the collection in 1974 when it went up for sale. He recommended it be purchased for the Sarnoff Library, and reported back to RCA that:

One noticed clearly the extent to which equipment makers of that era had to make all their own components. There are all kinds of switches, variable condensers, goniometers, variometers, inductors, insulators, knobs, actuating mechanisms, fixed and rotary spark gaps, motor generators, battery-chargers, wavemeters, decremeters, and a host of other component details. That was before the time when all kinds of components could be bought from specialty manufacturers. [Letter from Edmund A. Laport to A. Pinsky, December 17, 1973.]

Oddities include an early airplane radio with a propeller power generator designed to attach to the wing of the plane, a mule-pack radio set for the Army Special Signal Corps complete with leather saddle schematics, a blimp radio installation guide, and equipment for both marine and flying boats. The collection also includes a surprising pioneer in global wireless communications that ordered equipment from MWTCA: the United Fruit Company, famous as propagator of ‘Banana Republics.’. Also in the collection is a 1913 design for mast caps at the station in South Wellfleet, Massachusetts, which had relayed the first message from the U.S. to England in 1903. 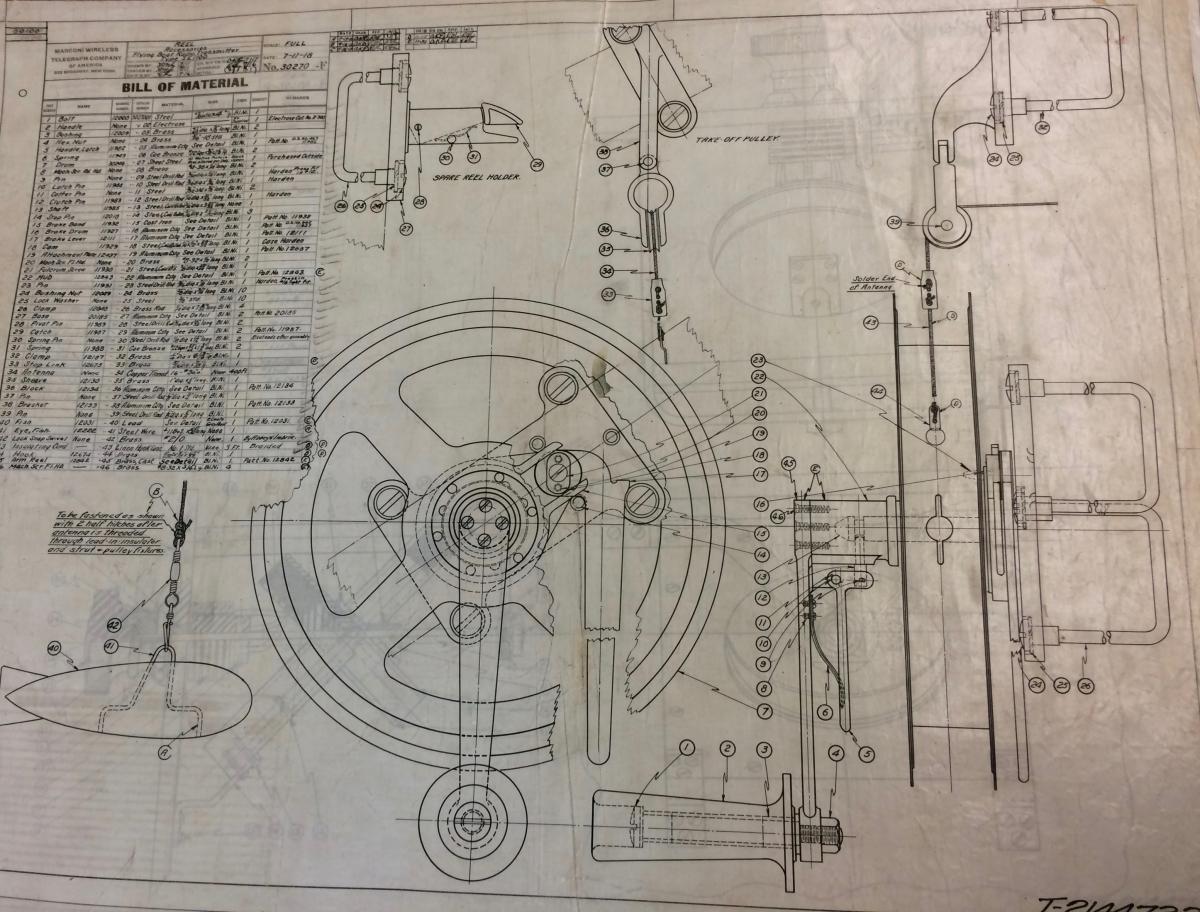 Sketch of parts for a ‘flying boat’ (AKA seaplane) transmitter

If naval communications spurred prosperity and success for MWTCA in the aftermath of the Titanic tragedy in 1912, the importance of oceanic transmissions also led to its demise in 1919. During World War I, the U.S. Navy seized control of almost all MWTCA assets for transmitting and receiving. In the aftermath, the United States realized they had no domestic wireless communications industry; the controlling stock in MWTCA was British. Seeking to safeguard America’s ability to communicate wirelessly with any nation, the Navy contacted General Electric, and arranged for the creation of an American-controlled company to buy out MWTCA.

This new company, The Radio Corporation of America, assumed control of all intellectual, material, and operating rights of the former MWTCA in 1919. In the transition, a young but ambitious former office boy by the name of David Sarnoff migrated from the MWTCA to RCA – but that’s a story for another blog post. 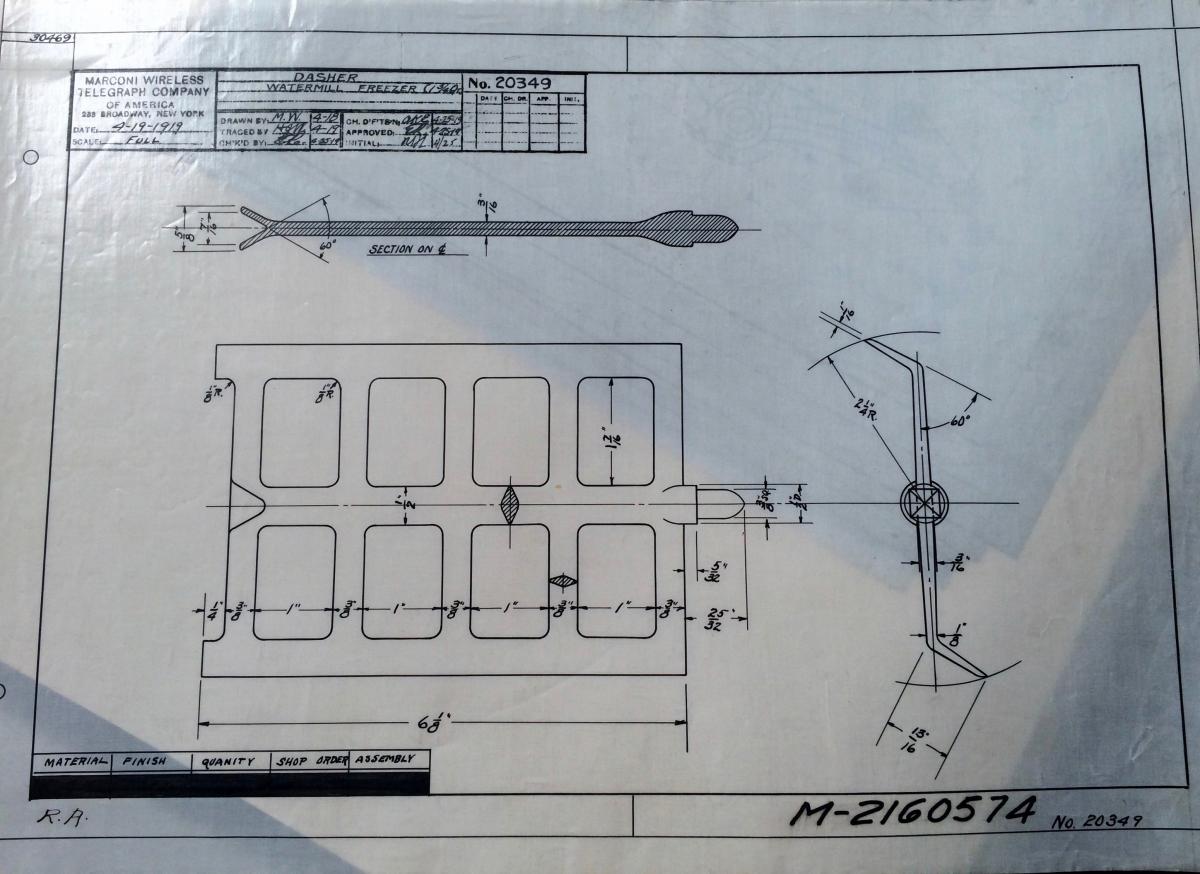 A final treat from the archives for a hot day – a ‘dasher’ meant for churning sweetened cream into ice cream, designed by the Marconi Wireless Telegraph Company of America! (The most surprising drawing in the collection, at least for this intern.)

Anastasia Day is the Summer 2016 Sarnoff Library Project Intern, working with the Manuscripts and Archives department in the Soda House. She is a doctoral student in history at the University of Delaware who studies the environment, technology, and society in the American twentieth century through food. Her dissertation is on Victory Gardens in World War II. Visit her website at www.thehistorianinthegarden.com.​