Where’s Nipper? Innovation and Identity in the Consumer Electronics Industry

In 1987, Robert J. Campbell, Vice President of Human Resources for Thomson Electronics in the Americas, distributed a letter to employees who until recently had worked for RCA. That year, Thomson, a French firm, had acquired RCA’s consumer electronics business from General Electric, marking another milestone in the slow demise of American-based corporations’ leadership in this ever-changing industry.

Campbell’s letter, unsurprisingly, sought to strike an optimistic note. Of the new employee handbook Campbell said: “I consider it an important expression of who we are—not RCA, not GE…but Thomson Consumer Electronics: a young, fresh enterprise in this country that isn’t afraid to pursue ideals as it strives for competitive excellence.” Key words highlighted on the cover of the new handbook included “leadership,” “quality,” and “vision.” “These words represent what we believe in and where we must focus our daily activities to be a progressive, successful and attractive company in a dynamic marketplace,” Campbell asserted. 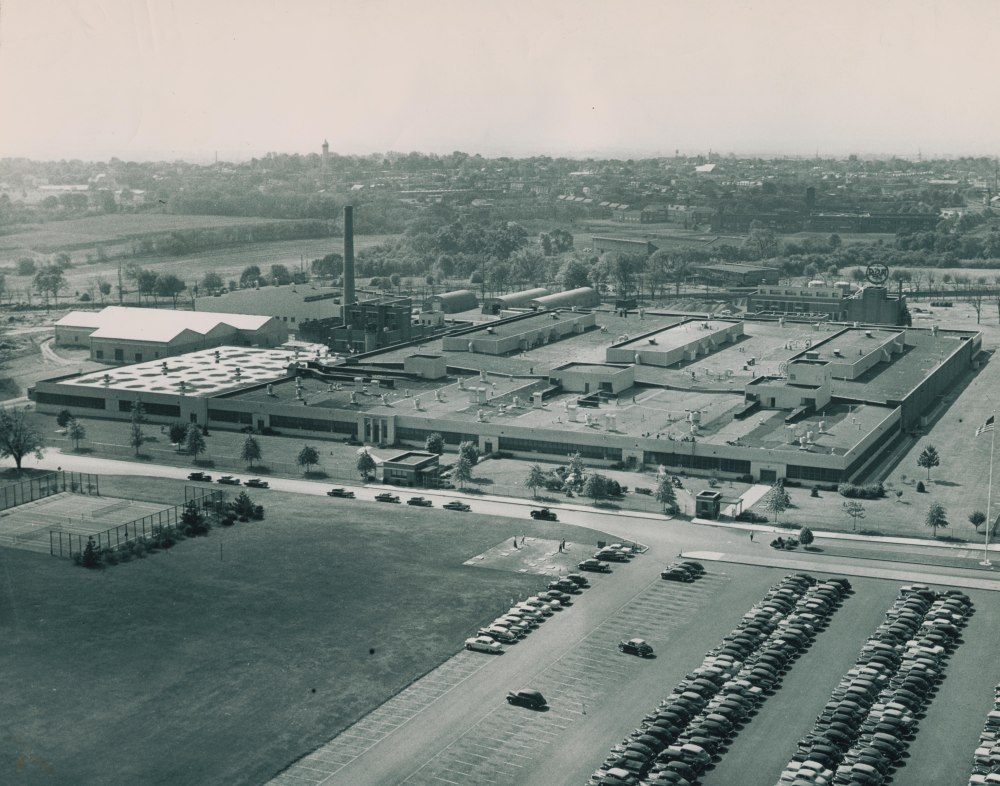 The vice president’s comments hint at the uncertain situation in which the former RCA found itself upon acquisition by Thomson. RCA was once a paragon of American technological innovation, industrial savvy, and corporate success. From its headquarters at Rockefeller Center in New York, it oversaw some of the most important innovations in media communication of the twentieth century: radio, black and white television, and finally color TV, which was perfected at the company’s Lancaster facility in 1954. RCA’s trademark, a charming dog named Nipper gazing curiously into the horn of a gramophone while listening to “His Master’s Voice,” was one of the most recognizable commercial images in the world.

In a changing corporate landscape, however, RCA slowly lost its leadership position in research, development, and consumer product marketing to international firms such as Sony, Toshiba, and Mitsubishi. Thomson, a company subsidized by the French government, became one of the largest consumer electronics manufacturers in the world with its new acquisition, but profitability in the industry proved elusive. What Campbell called a “dynamic” marketplace was, in truth, viciously competitive and increasingly crowded. RCA struggled to find a niche in such an environment. 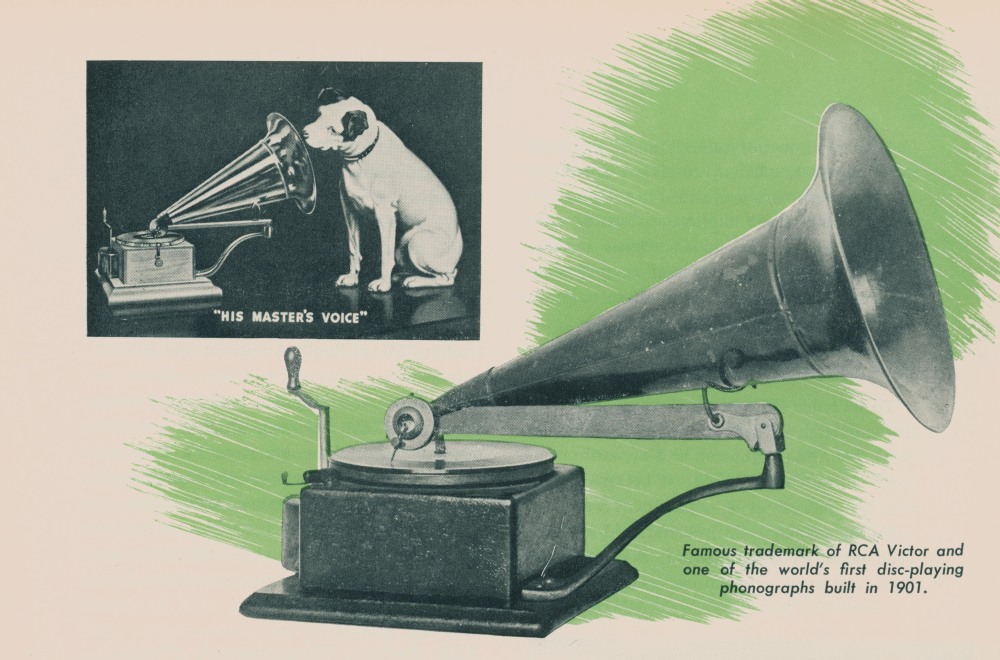 Nipper enjoyed a long association with consumer electronics companies, stretching back to the nineteenth century. In 1898, the dog’s owner, Englishman Francis Barraud, painted Nipper listening to a wind-up phonograph. By a series of twists and turns, a modified version of the painting became the trademark of the Camden, New Jersey-based Victor Talking Machine Company. Its use by RCA dated to 1929, when that company acquired Victor. By 1990, however, future use of the iconic image was in question. Would Thomson embrace a trademark so famously associated with a financially struggling American corporation? In a September, 1990 article in Thomson’s employee newsletter Consumer Electronics News, the company announced a new ad campaign centered on the famous fox terrier. “Nipper is one of the best known corporate symbols in the world,” said Thomson advertising manager Bruce Hutchison. “But bringing Nipper back hasn’t been an easy decision. Every year we’ve wrestled with Nipper’s strengths and weaknesses relative to the RCA brand.” 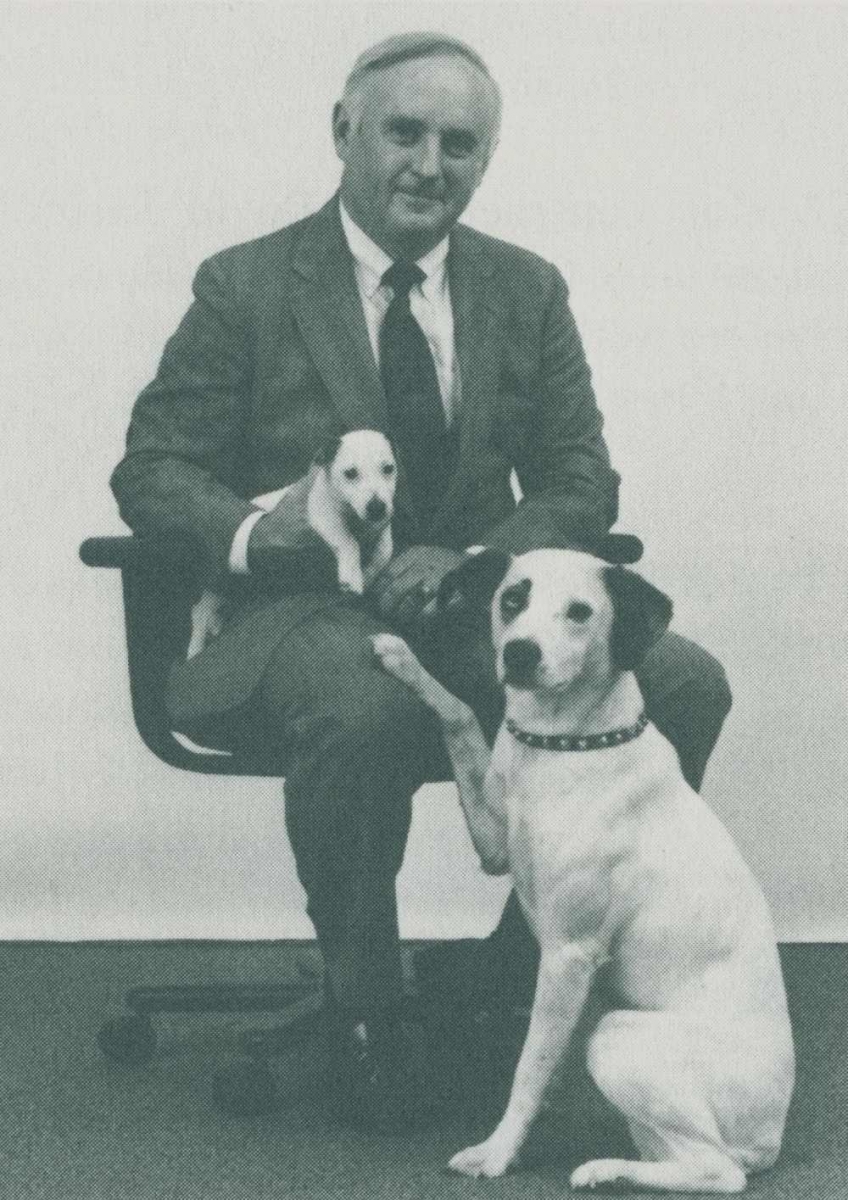 In a sense, the “strengths and weaknesses” to which Hutchison referred were one in the same: Nipper’s old age. By the end of the twentieth century, gramophones and a dog born in England in 1884 did not say “high-tech” to the American public. To some, the dog symbolized “trust, quality, reliability, warmth, and friendliness,” but he also seemed “old-fashioned, conservative, and out-of-date.” To solve the problem, Thomson modified the brand image to include Nipper as well as a puppy—“Little Nipper”—in advertisements, staring not at gramophones but instead enjoying new, high-tech electronics. “Little Nipper represents the new breed of high-technology, design and innovation inherent in RCA products,” Thomson proclaimed.  The pup embodied youth and vigor: TV advertisements featured Little Nipper (later renamed “Chipper”) skydiving and skateboarding. Ads featuring the dynamic duo ran in the fall of 1990 during one of the year’s most popular television shows: America’s Funniest Home Videos. 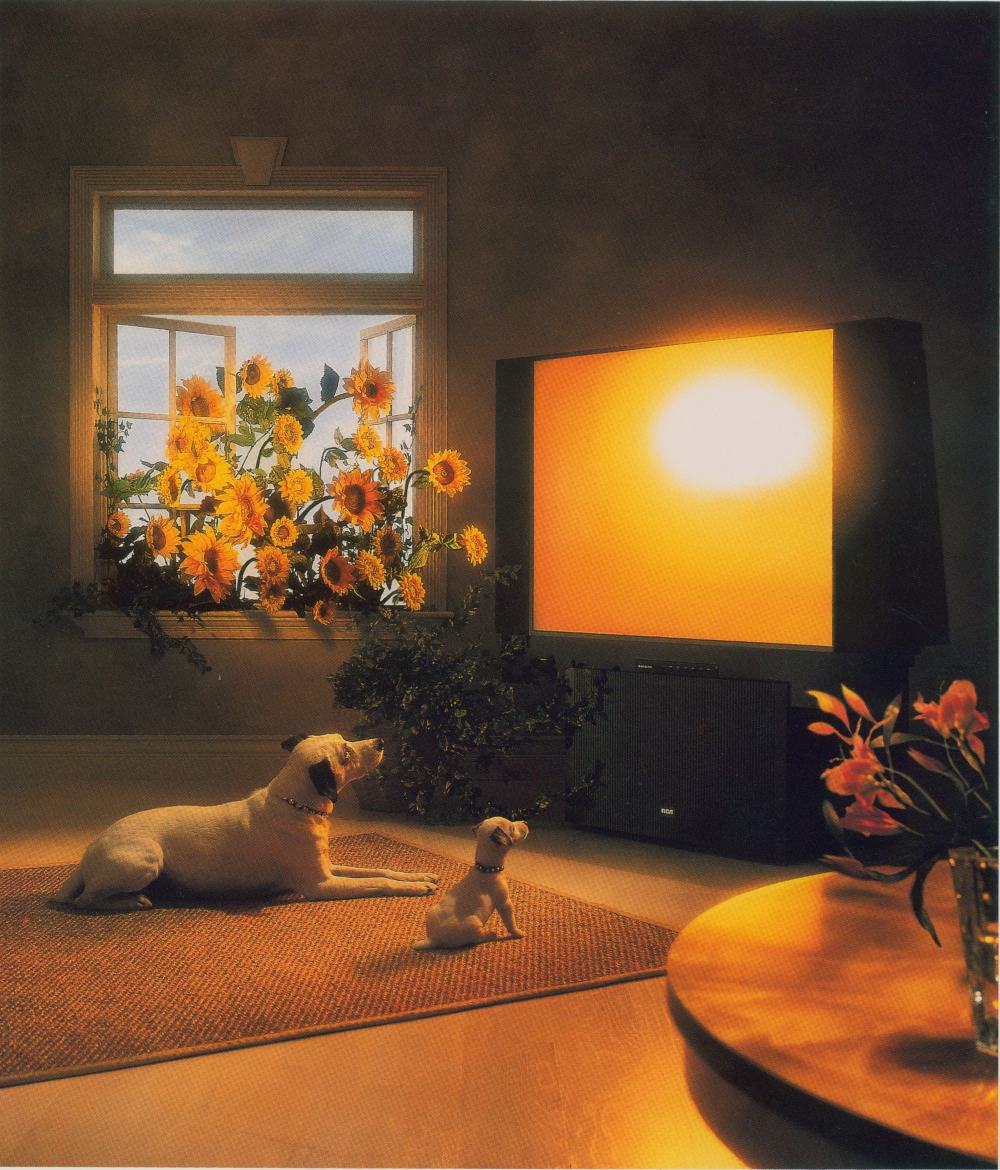 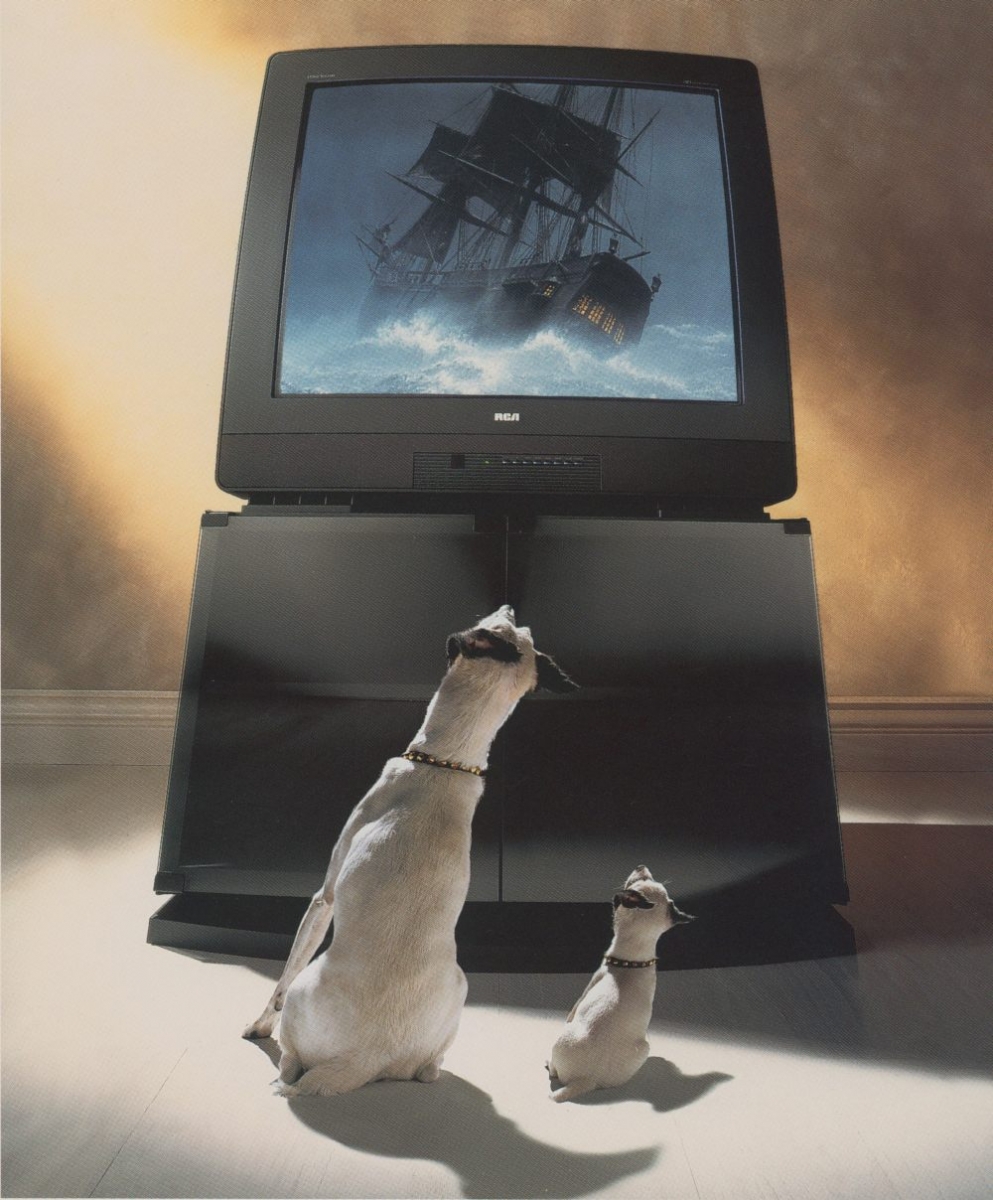 Unfortunately for Thomson, the canine celebrities did not secure the company’s long-term financial fortunes. In the face of revenue shortfalls and stiff competition from overseas, Thomson closed its consumer electronics division in 2005. The reign of RCA consumer electronics had effectively ended. 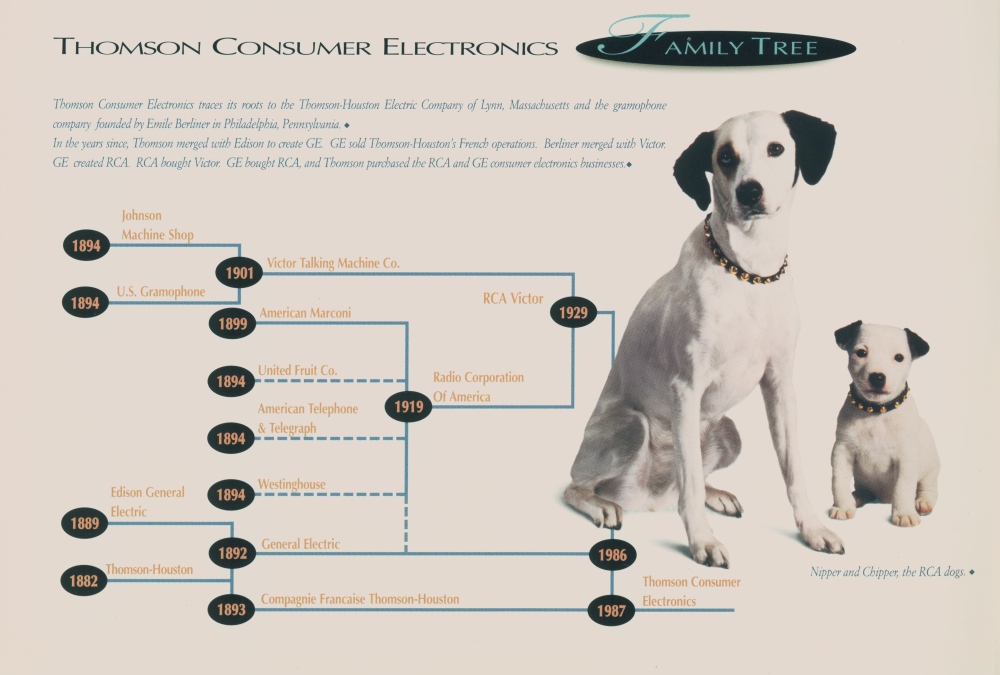 Today, some companies capitalize on the vintage appeal of their corporate symbols. Budweiser’s Clydesdale horses, for example, conjure up an aura of tradition that befits the brand identity of the historic beer brewer. Coca Cola’s polar bear have symbolized the refreshing beverage since 1922. Even industrial giants Ford and GE use logos that speak to longstanding trust and old-fashioned reliability. In the case of Thomson, however, Nipper proved emblematic of RCA’s glorious past, not the French firm’s viable future. Volatility and change are inherent in the technology industry. The fate of RCA and Nipper—once so ubiquitous in the American technology landscape but now subjects of the historian’s gaze—should help us keep the technology giants of our own era in perspective. Will Apple, Microsoft, Google, and Facebook have the staying-power that RCA lacked? Only time will tell.

Alexander Lawrence Ames is the summer 2015 David Sarnoff Library collection processing intern in the Manuscripts and Archives Department of the Hagley Library.  He holds an M.A. in public history from St. Cloud State University and an M.A. in American material culture from the Winterthur Program in American Material Culture at the University of Delaware.  He is currently pursuing a Ph.D. in history of American civilization and museum studies at the University of Delaware.