Sewing Industry Blogs of the 19th and Early 20th Centuries 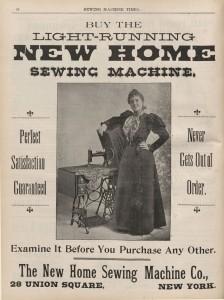 Sewing machine trade journals were the blogs of the nineteenth and early twentieth-century American sewing industry. They provided a space for manufacturers and other specialists involved in the trade to discuss and promote innovations and advancements in sewing technology. For historians today, they are also exemplary sources of information on the evolution of the sewing machine trade.

Innovation in the sewing machine industry across the Atlantic dates back to the late eighteenth-century. By the second half of the nineteenth-century, the United States was a leader in this environment of technological creativity. Trade journals are a good representation of this pattern as well as a force in the industry, as new inventions and lists of patents appeared in every issue. Likewise, sewing machine trade journals published data on leading companies' new production methods, thus demonstrating the change toward mass production of sewing machines beginning in the mid-nineteenth-century. 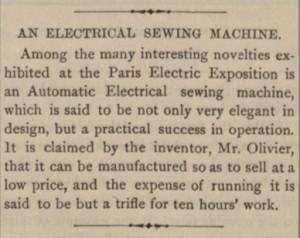 How to sell machines was an important focus in trade journals. Beginning in the 1870s, manufacturers conversed with selling specialists in order to expand markets and unravel consumer needs and desires. Canvassers and selling agents contributed extensively to trade journals, showing their expertise on how to approach consumers. Trade journals tracked the movement of company canvassers from city to city in the United States as well as around the world. The Sewing Machine Times, for example, had a correspondent in Mexico City who reported on the progress of different American sewing machine companies in the country. The views and experiences from canvassers provide important insights to reconstruct the channels of distribution of sewing machines. Information about individuals involved in the trade was often personal, as trade journals provided updates on marriages and the family affairs of canvassers, selling agents and presidents of large American sewing machines companies.

Paula A. de la Cruz-Fernandez has received several research grants from the Center for the History of Business, Technology, and Society to use materials from the Hagley Library in her dissertation “Atlantic Threads: Singer in Spain and Mexico, 1860-1940.”