What Every Shareholder Should Know

I had decided to come to the Hagley Library and Museum to better understand how corporate managers responded to the activities of shareholder activists featured in my dissertation. Hagley had been recommended to me as a great repository of material from companies like DuPont and General Motors, personal papers of industry leaders like J. Howard Pew, and political organizations like the National Association of Manufacturers.  It was in the J. Howard Pew papers that I made an exciting discovery. Within Pew’s papers, I found correspondence between him and a woman named Catherine Curtis who was concerned about conduct at annual meetings. Specifically, Curtis was concerned about Wilma Porter Soss and her activities at annual shareholder meetings. 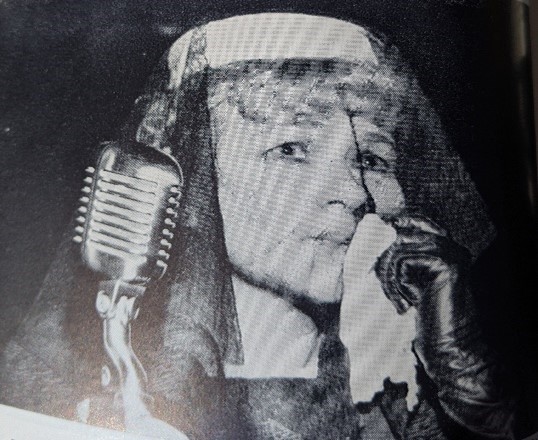 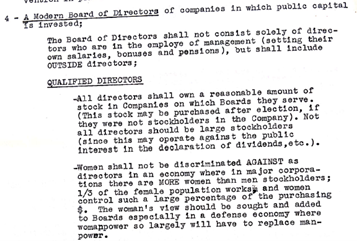 Soss was a shareholder who had begun going to annual meetings in the 1940s and was known for challenging directors directly while dressed in sometimes flamboyant costumes to draw publicity to her cause.  Her key reforms included policies like secret ballots and cumulative voting to make it easier for shareholders to choose directors and set corporate policy how they saw fit. One of her goals was to get more women directors on corporate boards because women were the majority of shareholders.  Her desire for reform and her belief that women should have greater influence led to the foundation of the Federation of Women Shareholders in American Business. Through this organization, Soss would organize and communicate with women shareholders on how to best challenge management and exercise their rights as shareholders. It is while she is on this mission that Curtis encountered Soss and decided to contact Pew with her concerns.

One example of Soss and her organization’s efforts was “What Every Shareholder Should Know,” a list of reforms designed to empower shareholders and discipline management. The document caused some to think that Soss and her ilk were seeking to undermine corporate America. While the language of democracy, cumulative voting, and a secret ballot may seem innocuous, to the concerned Curtis, the language was the same used by radicals in the French Revolution! This seemingly small encounter demonstrates the uphill battle that shareholder activists would face not only from directors but from their fellow shareholders who saw their efforts as subversive. However, it also shows how these activists managed to create a shared purpose and set of principles around which to organize while they pushed for reforms to improve the corporation.

Brian Sarginger is a Ph.D. candidate in history at the University of Maryland. In support of his work, Sarginger received a research grant from the Hagley Center for the History of Business, Technology, & Society.