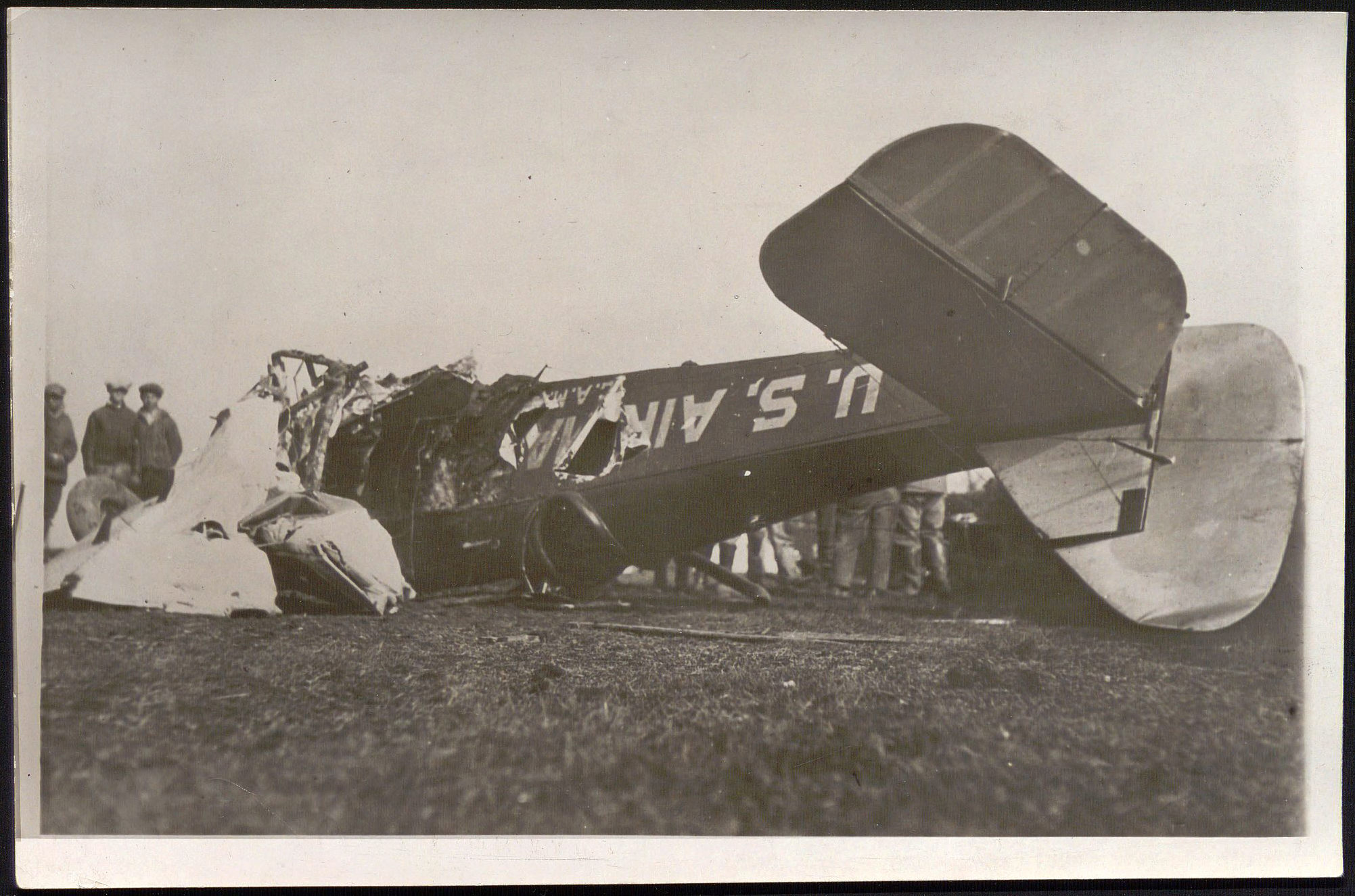 This photograph shows the crashed U.S. Air Mail plane flown by a 24-year-old Charles Lindbergh (1902-1974). Lindbergh crashed the plane on a mail route on this date, November 3, in 1926, not long after crashing a similar plane on the same route on September 16 of that year.

The first use of air mail in the United States occurred in September 1911 from Garden City, New York to Mineola, New York. Other experimental airmail flights followed. In 1918, Congress appropriated funds to set up an experimental air mail route between New York City and Washington, D.C., with a stopover in Philadelphia.

Although initially operated with the cooperation of the War Department, the Post Office Department assumed full control of this service later that year. With the success of this air mail route, plans were made to complete a transcontinental route from New York to San Francisco. Congress passed the Kelly Air Mail Act in 1925, which got the government out of the air mail business.

The act required private carriers to bid on Contract Air Mail (CAM) routes set up by the Post Office. The route operated by Robertson Aircraft Corporation was CAM #2 and went into operation on April 15, 1926. Its flights traveled between Lambert Field in St. Louis, Missouri to Chicago, Illinois, with stops in Springfield and Peoria.

This photograph was taken on November 5 by Underwood & Underwood, a publisher of stereoviews that pivoted to the emerging field of news bureau photography during the early 20th century. Text accompanying the image reads:

“When Charles E. Lindbergh, aviator in charge of a United States mail plane, enroute from St. Louis to Chicago, ran out of gasoline at night, midway on his journey, and unable to discern a landing place, he was compelled to abandon his machine and leap to safety in a parachute, dropping 13,000 feet setting a new night record in altitude for such a jump. After alighting, two miles distant, Lindbergh was unable to find his plane as it did not catch fire, the gasoline tank completely emptied. When day came the machine was found less than 300 feet from the farm home of Charles Thompson, completely demolished and the mail scattered all over the field. Thompson guarded the pouches until postoffice authorities forwarded them to their destination.”

Many of these photographs are portraits of individual air mail service pilots. Several photographs taken in 1911 at Garden City, New York, on the launch of the first official air mail flight, are also part of the collection. Airplanes used by the Air Mail Service appear in many of the images.

To view digitized images from this collection online now in our Digital Archive, click here.