We’re posting this ca. 1967 photograph today in recognition of the 115th anniversary of the birth of Dr. Grace Hopper ... 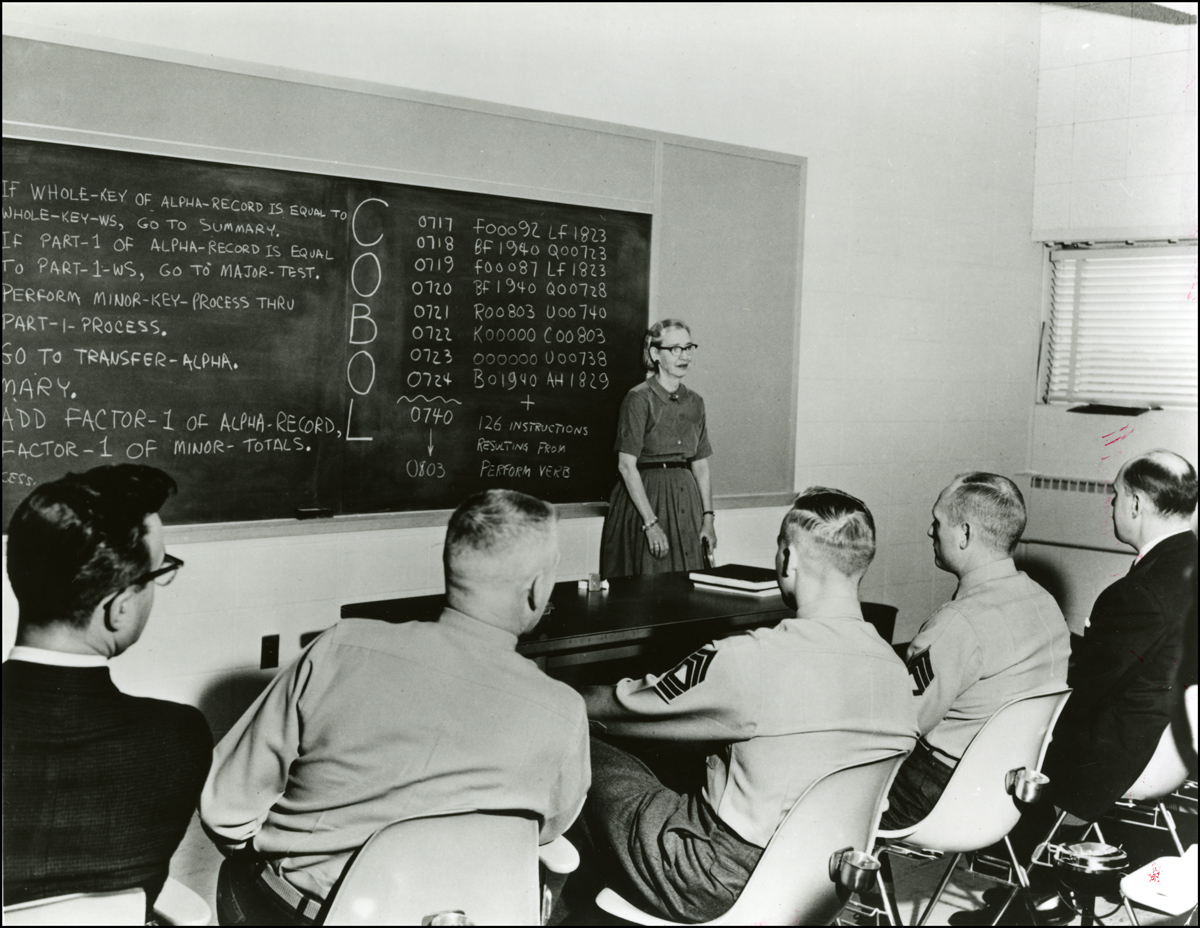 We’re posting this ca. 1967 photograph today in recognition of the 115th anniversary of the birth of Dr. Grace Hopper, both for her groundbreaking work in computer programming and for her service as a mentor to others in the field.

One of the ways that a knowledge of history helps us to think more critically about present-day issues is to help us reconsider questions in useful and illuminating ways. For example, when we hear a debate surrounding the question of why there are significantly fewer female than male programmers, and we know that this was not always the case, we can reframe the question in more helpful and insightful terms: “When and for what reason did we see a large decrease in the number of women in tech?”

Hopper’s career as a computer scientist and programmer began in 1944, after she left her teaching position as an associate professor of mathematics at Vassar to enlist in the United States Naval Reserve (Women’s Reserve) during World War II, a decision that would eventually earn her the rank of Rear Admiral. In 1944, she was assigned to the Harvard University Mark I computer programming team. Hopper remained at the Harvard Computation Lab until 1949, when she accepted a senior mathematician position at the Eckert–Mauchly Computer Corporation, joining the team developing the UNIVAC I.

Throughout the 1940s and 1950s, the often tedious and detail-oriented behind the scenes work of programming was frequently considered to be women’s work. By the 1960s, approximately 40% of the working computer programmers in the United States were women, but few were hired to occupy leadership positions and nearly all were paid less than their male coworkers. Despite having created the widely cited 500-page comprehensive manual for the Harvard Mark I, Hopper was not once specifically credited in the manual for her authorship or her programming contributions.

By the time of her death in 1992, however, she had achieved recognition for her work in the form of many honors, including the 1962 Data Processing Management Association Man of the Year award (now the Distinguished Information Sciences Award) and the 1991 National Medal of Technology; she was also the first American and the first woman of any nationality to be made a Distinguished Fellow of the British Computer Society and held forty various honorary degrees from universities worldwide.

This photograph is from our collection of Sperry Corporation, UNIVAC Division photographs and audiovisual materials (Accession 1985.261). To view more items from this collection online, visit its page in our Digital Archive by clicking here. To view a digital collection of photos and other materials documenting Grace Hopper and other women computer programmers, click here.