In 1955, the National Association of Manufacturers presented "Americade," a traveling exposition. According to the press handbook, it was “a dramatic exposition of America’s progress and opportunity in the important phases of our American Way of Life.”

The exhibit traveled extensively throughout the United States with no admission fee. It did not sell, display, or promote any products. Instead, it imagined the United States in 1975, 20 years into the future, using a series of animated exhibits, unique lighting and sound effects. 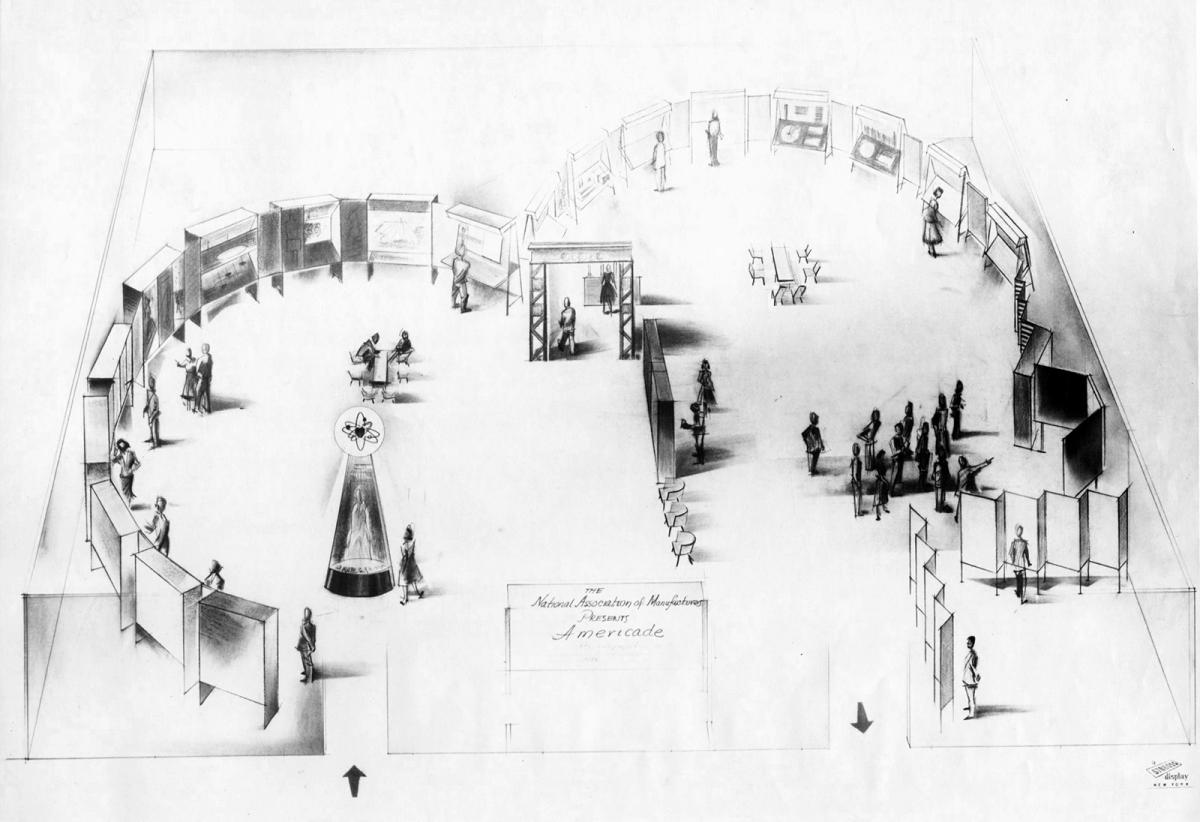 Over 100,000 people saw the Americade exhibition in eight road shows and two special New York City showings in 1955. The following year, the exhibition was scheduled for 17 different cities across the United States. 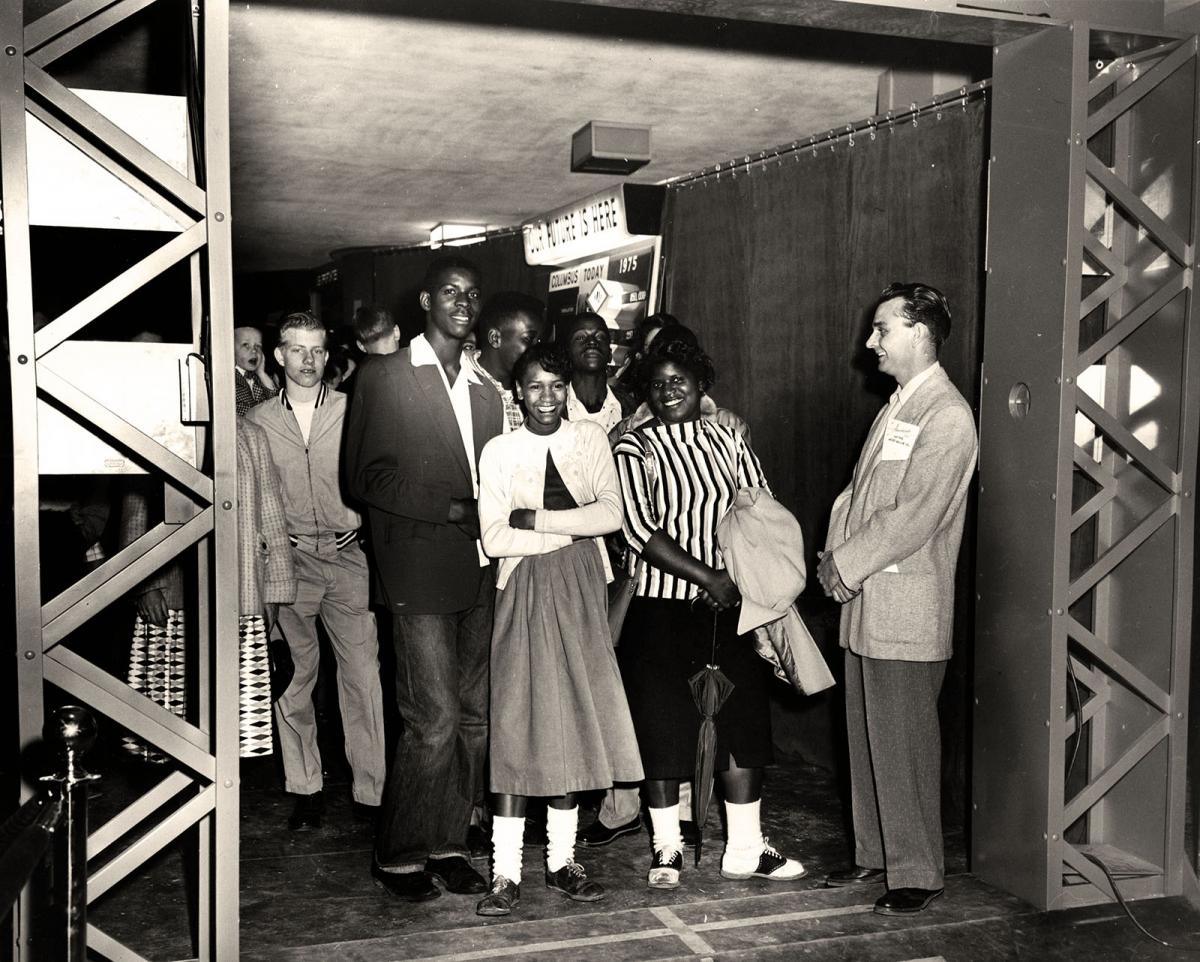 The exposition was divided into two interrelated sections. The first section dramatized attainable improvements in human and scientific progress. The second, illustrated how the preservation and strengthening of free competitive enterprise were vital to the full realization of the nation’s vast potentials.

There were 15 exhibits, an area for NAM members and visitors to hold discussions, literature racks, as well as an introduction. 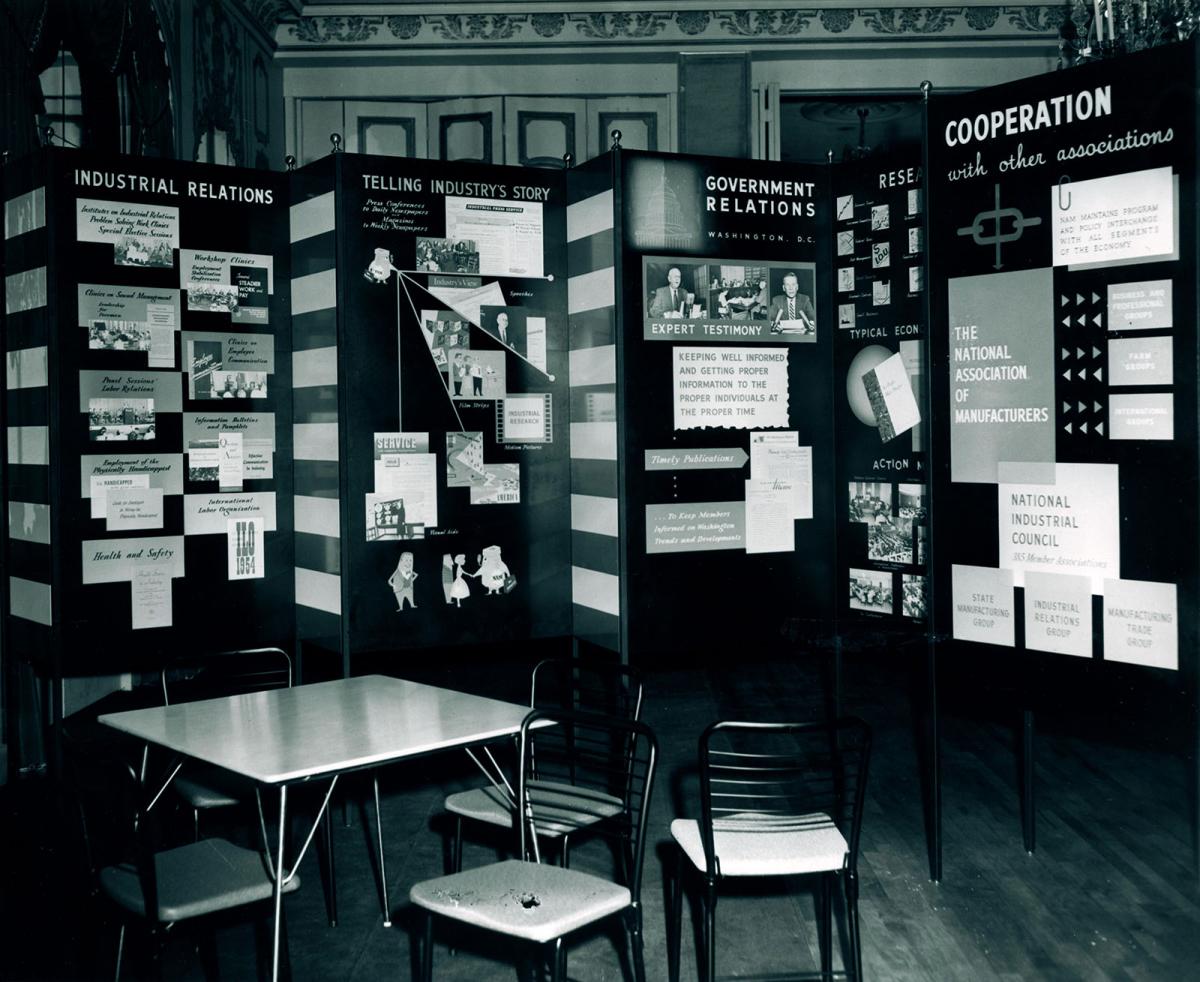 The exhibit topics included: growth, home, health, religion, education, transportation, communications, energy, job opportunities, local exhibits pertaining to the particular city, research and invention, productivity, profit, competition, and freedom checklist. For this post I am going to focus on only a few of the exhibits at Americade: 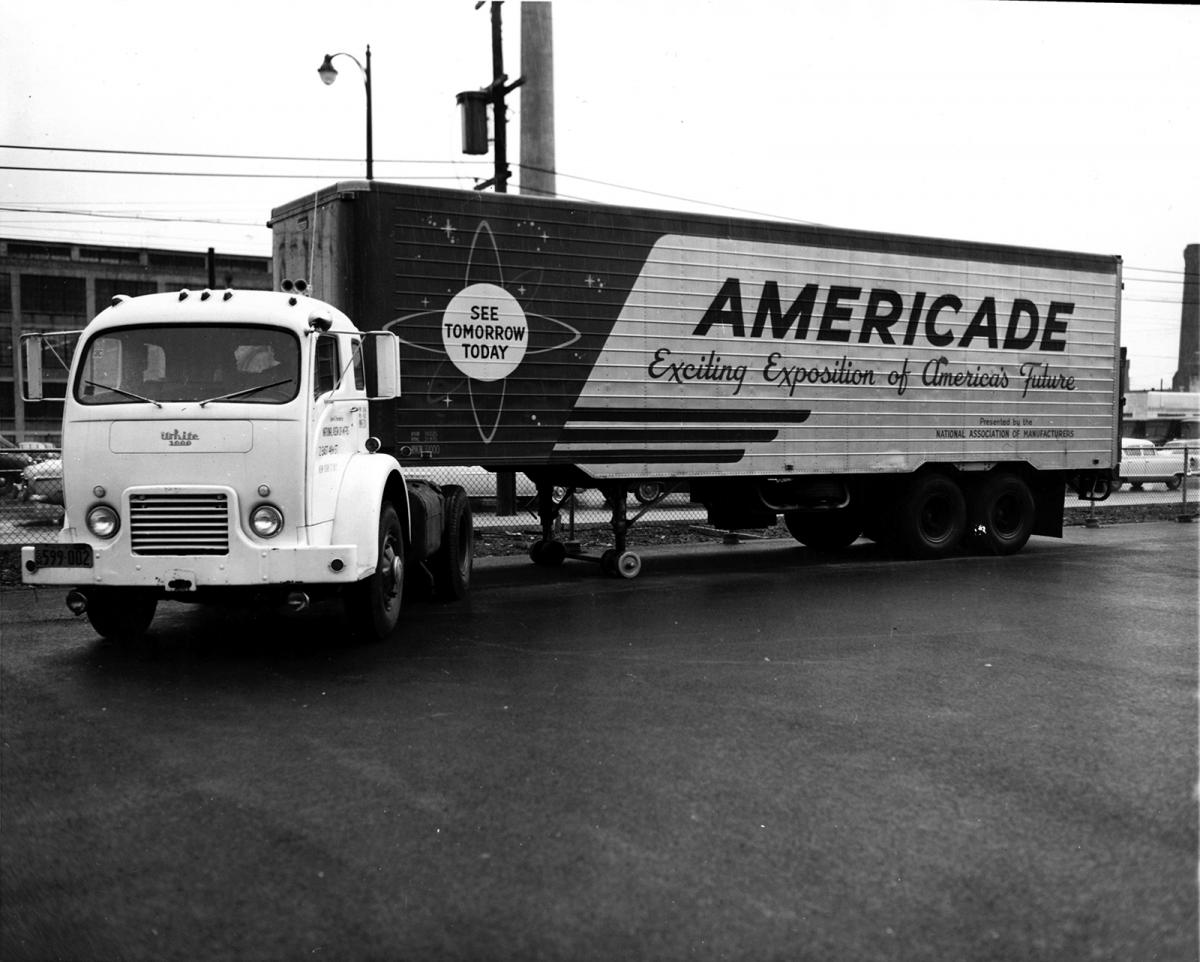 Upon entering the exhibit, visitors first saw one on growth. There was a large board displaying the current population of the United States. Every 8 seconds the sound of baby crying signaled that someone was born; one emigrant every 24 minutes; one immigrant every 2 minutes; and one death every 21 seconds. Ultimately, there was a net gain every 12 seconds.

Based on these calculations, the exhibit predicted the United States population in 1975 would hit 220 million. However, the population was close to 216 million in 1975 according to census estimates, and would not reach the predicted population until 1977. 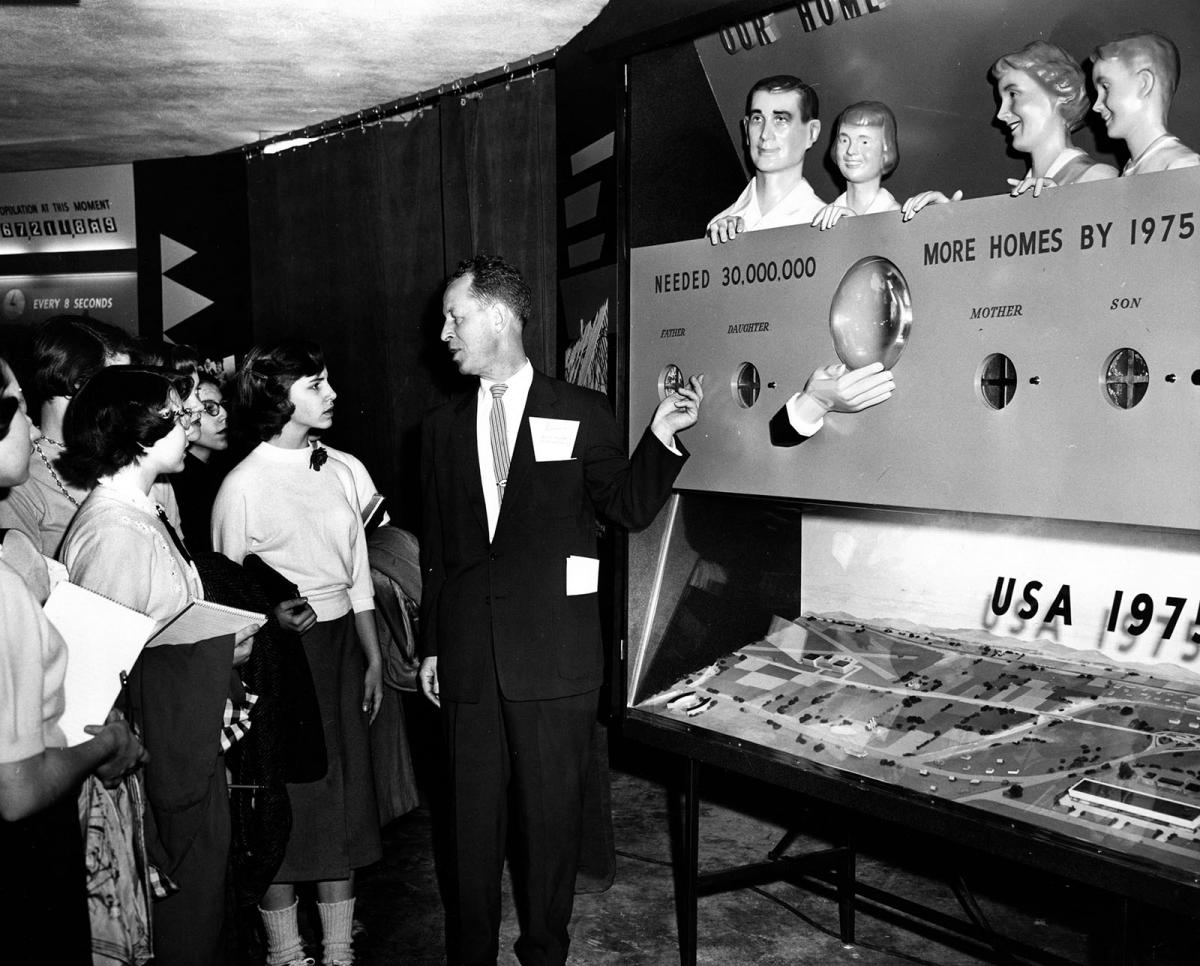 The exhibit on the advancement in homes portrayed a very Jetsons-esque future. By 1975, 30 million more homes would need to be built.

Homes would be pre-fabricated and built in a day, and they would include a swimming pool, centrally controlled lighting and lock system, movable interior walls that could change color with the flip of a switch. They would also have a completely automatic kitchen, solar energy used for heat, phone-vision that would allow them to see and talk with anyone around the world, and rocket ships as the mode of distance transportation. 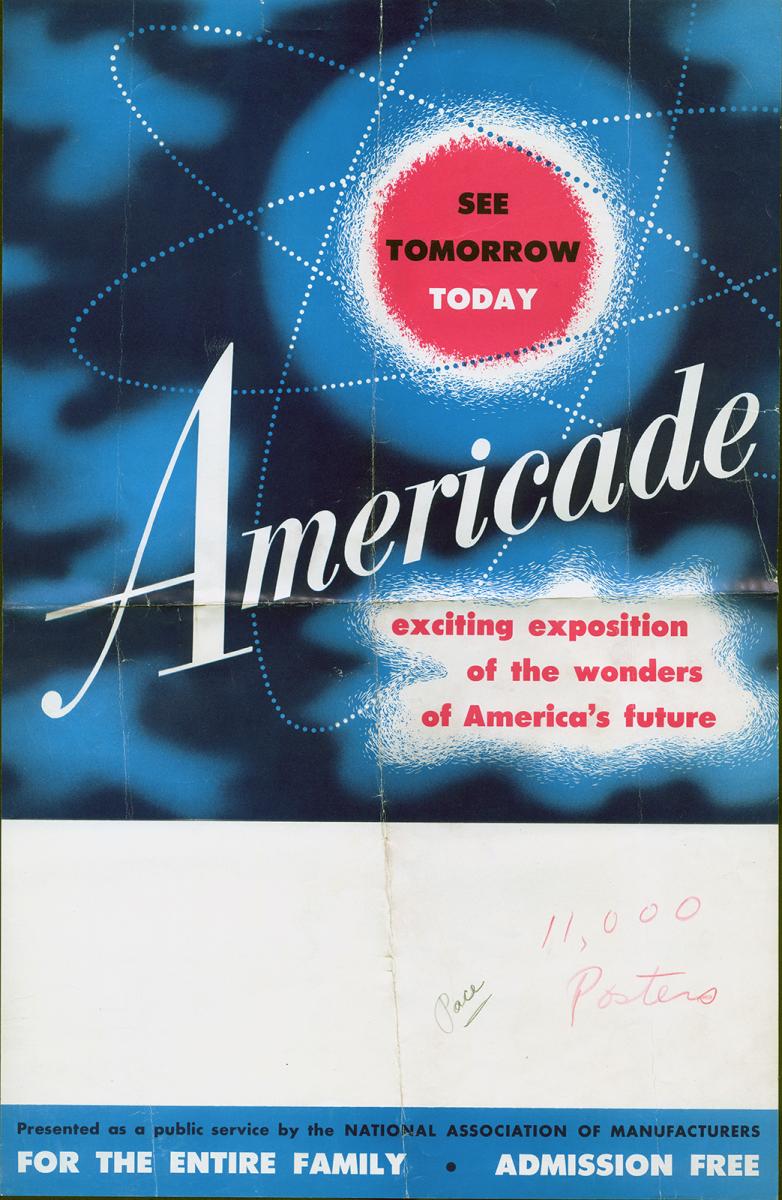 The transportation exhibit highlighted the development of long-distance transportation, including outer space. The display offered a cockpit view of a simulated take-off of a spaceship with accompanying sound effects and flashing stellar galaxies. Visitors could choose between astral and earth-bound destinations. Once a destination was selected and start button pressed:

“A whole set of animations and lighting effects is activated. First, there is the sound of a jet take-off. On the center screen a profusion of planets, stars and meteors appears and sweeps downward as the ship ‘rises’ amidst a series of flight sound effects. Red and green navigational lights on the nose of the craft flash rhythmically. The steady ‘beep’ of the directional finder is heard and the radarscope begins to function. At the half-way point the rush of images on the screen reverses. With the astral bodies now rushing upwards the ship gradually ‘lands.’ Sound effects again supply appropriate background noises.” 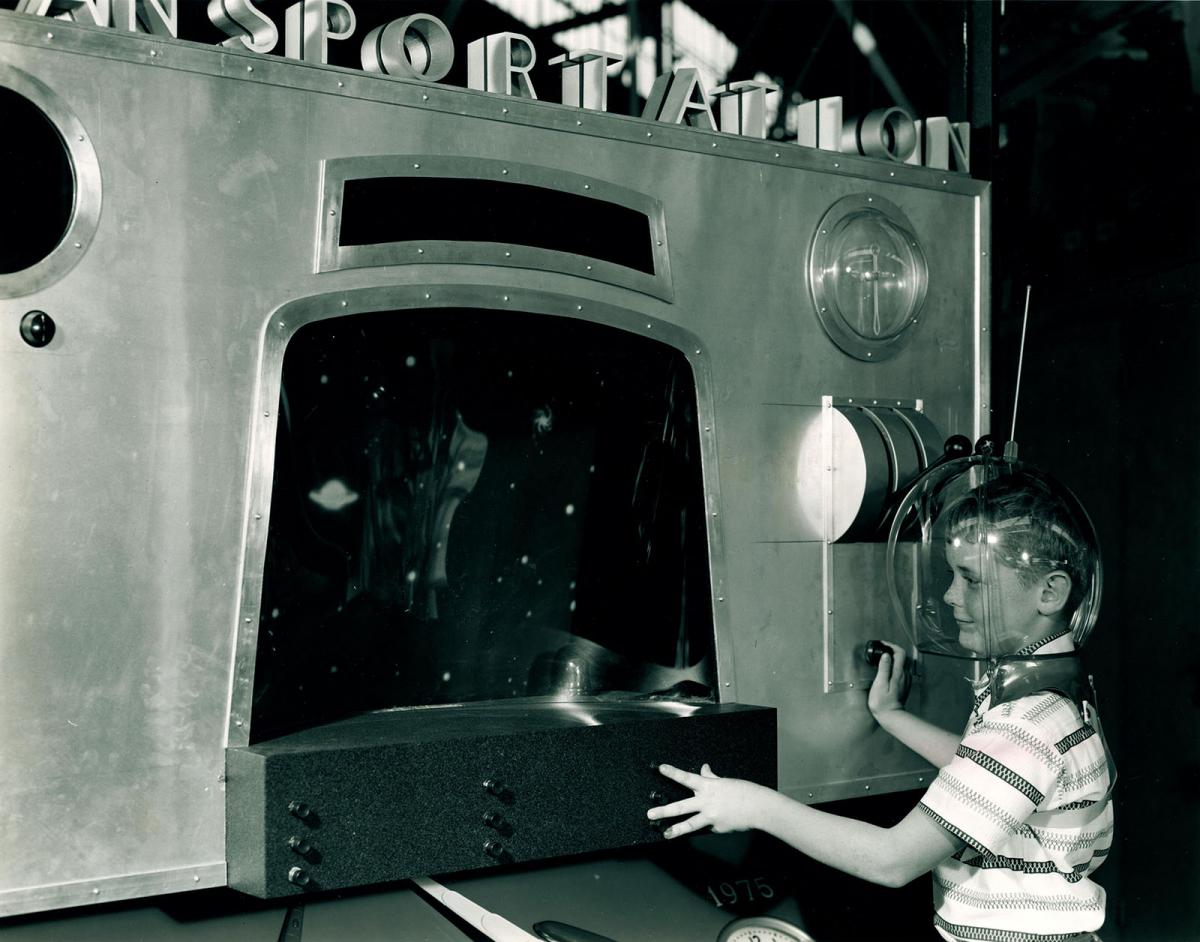 The exposition indicated that within 20 years, the common man would be able to travel to outer space. In 1955 the first satellite had yet to be launched, and it would be another six years before a human went to space; 14 years before man landed on the moon.

The final exhibit section was devoted to telling the NAM story. Along with panels and illustrative maps, this partitioned off area enabled NAM staff and members to discuss NAM programs and other activities with visitors.

A map depicted the divisions and regions of the NAM, a listing of policy committees and areas of study, the aims and objectives, as well as literature available for guests of members.

After its conclusion, the Milwaukee School of Engineering took most of the components that comprised the exposition. Some were scheduled to become permanent exhibits, while others were likely used in vocational classes as teaching aids.