Comic Books - Not Just for Superheroes!

With the debut of Superman in 1938, the golden age of comic books began and would continue until about 1950.  Batman and Robin, Wonder Woman, Captain America, Green Lantern, and Captain Marvel all were introduced during this time. Comic books were inexpensive, portable, and entertaining. The stories reflected current events and values, often with a patriotic undertone and with good triumphing over evil.

Likely wanting to embrace their popularity, the NAM produced several comic books in the late 1940s to early 1950s. Noted American cartoonist Dan Barry illustrated several of these issues. The comics featured themes that the NAM hoped to promote: citizen engagement, defense of America’s dollars, the threat of socialism, and the power of American production, to name a few. Often, the comics invoke the past as an example of what not to do.

Let’s take a closer look at one comic, Fight for Freedom, from 1949. The cover depicts a patriot ready to leave his farm to, as the title says, fight for freedom. The comic opens overlooking a contemporary town square where people discuss how their one vote will not make a difference in an election, how the government should take business away from the greedy bosses, and how the government is also handing out things to people. But the minuteman from the cover points out that the liberty he and others fought for may be slipping away, and that the fight for freedom has been an endless one. 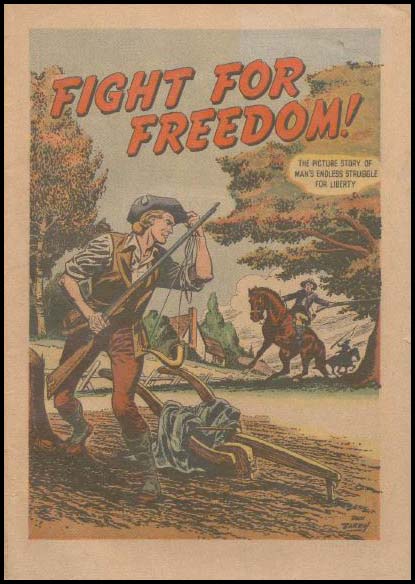 The reader is then transported through time, stopping at moments of importance for freedom: ancient Egypt when freedom was taken away for the “good of the state,” the signing of the Magna Carta by tyrant King John of England, Puritans fleeing religious persecution for the New World, colonists working hard for success and not tolerating oppressive laws, and the writing of the Declaration of Independence. The comics portray that once the United States gained its freedom from Britain, tremendous energy in free men carried the new nation in a great surge of individual enterprise and initiative. Science and invention flourished; new industries sprang up with amazing speed; highways, the telephone, and telegraph lines spread across the land; and America’s engineering know-how became the envy of the world. While the United States was thriving and enjoying these freedoms, “people in other parts of the world were listening to the false promises of the ‘state planners’” such as in Italy, Germany, and Russia. The reader is brought back to the town square, only now a few things are different. The townspeople are alert and will fight indifference as well as the temptation to let the government do the thinking for its citizens.

The point is driven home further by the text on the back cover. It concludes “We must fight for freedom in our daily lives…by taking the time and trouble to vote wisely…by protecting our own rights and the rights of others…and by showing our faith in America by everything we think, say, and do.”

The NAM comic books are available to researchers. They can be found by searching the library catalog. For more information, please email us at askhagley@hagley.org.