Who Was David Sarnoff?

This is the second and final part of a biographical sketch of David Sarnoff. Part I can be found here.

Less than six months into his presidency, Sarnoff was faced with a formal anti-trust complaint by the Department of Justice against RCA. After a year and a half of complex legal maneuvering and negotiations, Sarnoff convinced General Electric and Westinghouse to sell their holdings in RCA to settle the dispute. The result of this was not only the independence of RCA, but the removal of the last constraints on Sarnoff’s freedom of action within the corporation.

Although RCA recorded its first ever losses in 1932 and 1933, Sarnoff was unfazed. He correctly judged that the market for radio remained strong and he also had another technology in mind. In 1929, Vladimir K. Zworykin, then at Westinghouse, had approached Sarnoff with his ideas on television development. Although mechanical television systems had been successfully demonstrated in the 1920s, Zworykin argued that only an electronic system could solve the technical obstacles to widespread introduction. Sarnoff eagerly backed Zworykin’s research and became a frequent visitor to his laboratory at RCA Camden.

Two years before Zworykin and Sarnoff met, Utah inventor Philo T. Farnsworth had patented an electronic pickup tube that functioned on different principles. In 1932, he successfully filed an action with the Patent Office against RCA on the grounds that its system was subject to his patent. After RCA’s appeal was rejected in 1936, Sarnoff attempted to buy Farnsworth out, but the latter wisely refused and demanded that RCA license the patents from him. Unwilling to jeopardize the introduction of television with lengthy legal proceedings, Sarnoff agreed. The result was a system that Sarnoff believed would create an entire new industry. 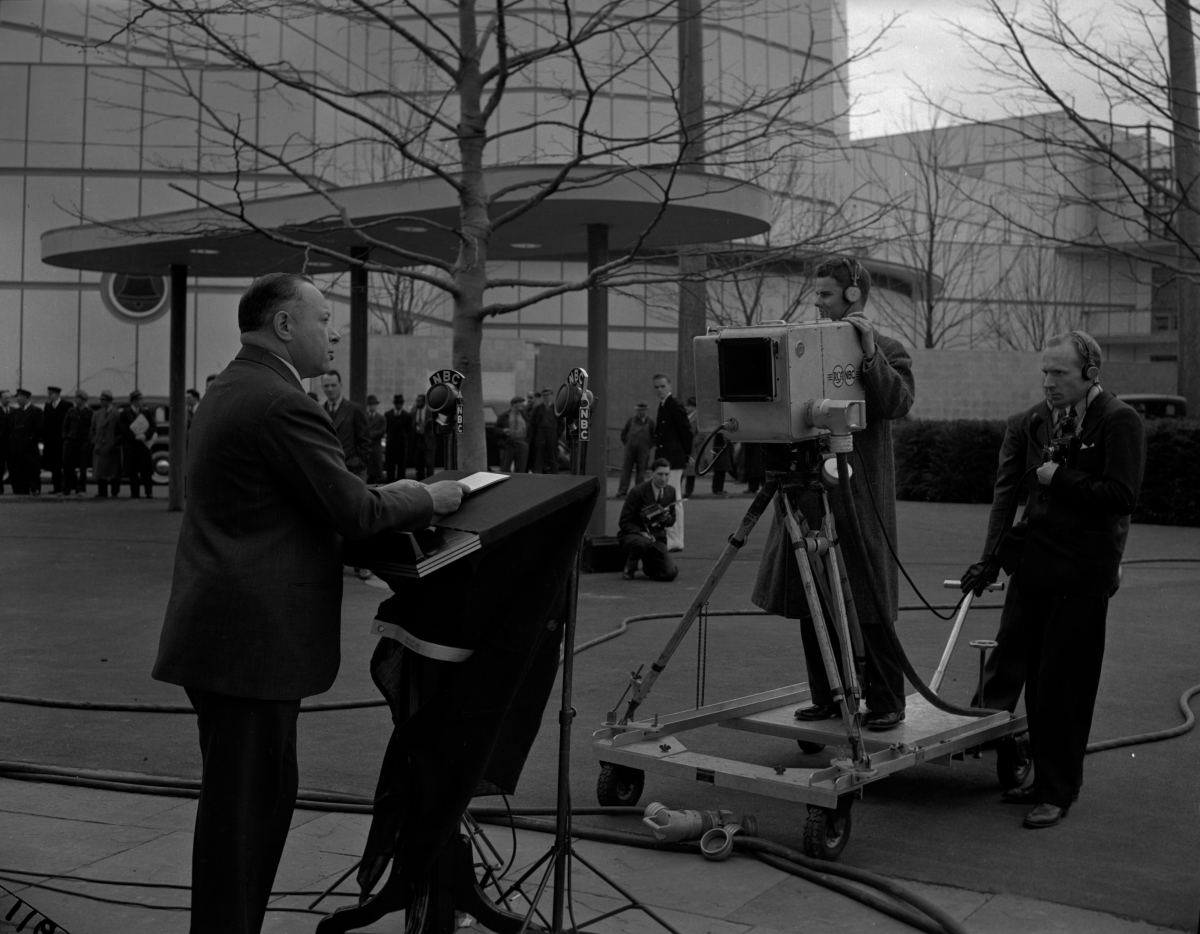 Despite these successes, the widespread introduction of television would not happen for another decade. Until 1941, a complex and extremely bitter dispute over national technical standards for broadcast and reception roiled the industry. Although Sarnoff dramatically inaugurated NBC’s television service at the 1939 World’s Fair in New York, declaring “Now we add radio sight to sound,” he was unable to convince the public to buy television sets that might not meet a future national standard. The settlement of the standards dispute in RCA’s favor two years later would have lasting implications, but the entrance of the United States into the Second World War again delayed television’s arrival.

Sarnoff had entered the U. S. Army Signal Corps reserve as a lieutenant colonel in 1924 and been promoted to colonel in 1931. During the war, he was called up three times for active service. The first two occasions were relatively brief periods in 1942 in Washington and Philadelphia. In March 1944, he was assigned to the Supreme Headquarters, Allied Expeditionary Forces (SHAEF) in England and tasked with overseeing press communications and broadcasting for the invasion of France. Widely praised for his leadership, Sarnoff also established a close friendship with the Supreme Allied Commander, Dwight Eisenhower. 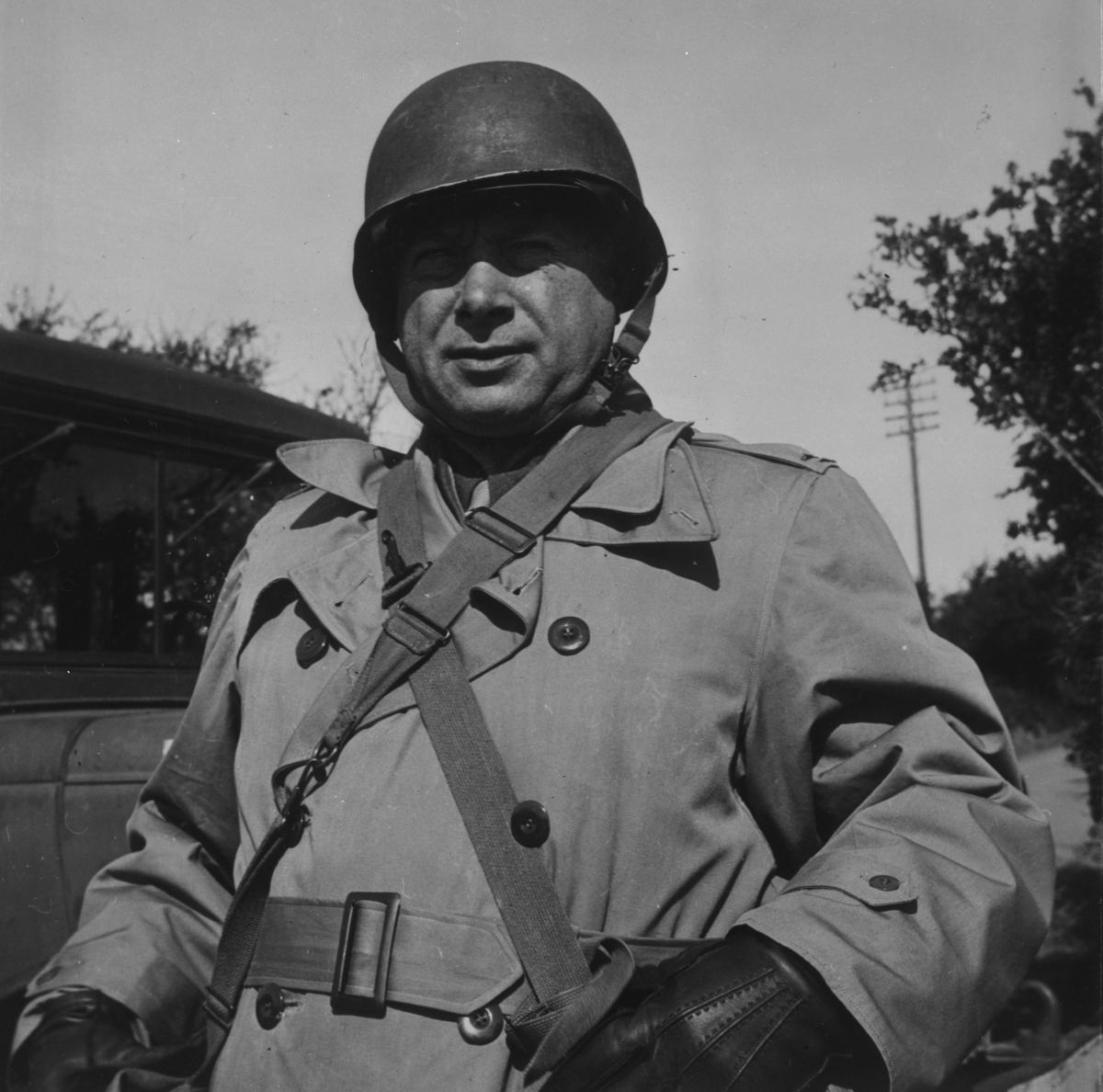 David Sarnoff in 1944 on active duty with the U.S. Army Signal Corps.

His most notable additional service after the invasion was the reestablishment of Paris’s communications links with London and New York. Sarnoff was rewarded with a promotion to Brigadier General in November 1944 and was subsequently invariably referred to as “The General” by RCA staff.

Returning to civilian life in December, Sarnoff laid the groundwork for RCA’s shift to peacetime mass production of television sets, which began barely a year after the Japanese surrender. In 1947, the terminally ill James G. Harbord resigned as chairman of the board and Sarnoff was elected as his replacement. Soon afterwards, Sarnoff turned over the position of president to Frank M. Folsom, but kept the title of CEO, as well as strict control over the company. Before long, Sarnoff became embroiled in a series of disputes over color television that were even more heated that the pre-war standards debates.

There were actually two separate controversies over color television. The first was the CBS’s attempt to leapfrog monochrome television by introducing a mechanical color system in the 1940s and 1950s. Despite winning FCC approval in 1951, the CBS system failed from a number of factors, including its inexperience with manufacturing, the outbreak of the Korean War, and RCA’s successful demonstration of a prototype electronic system. 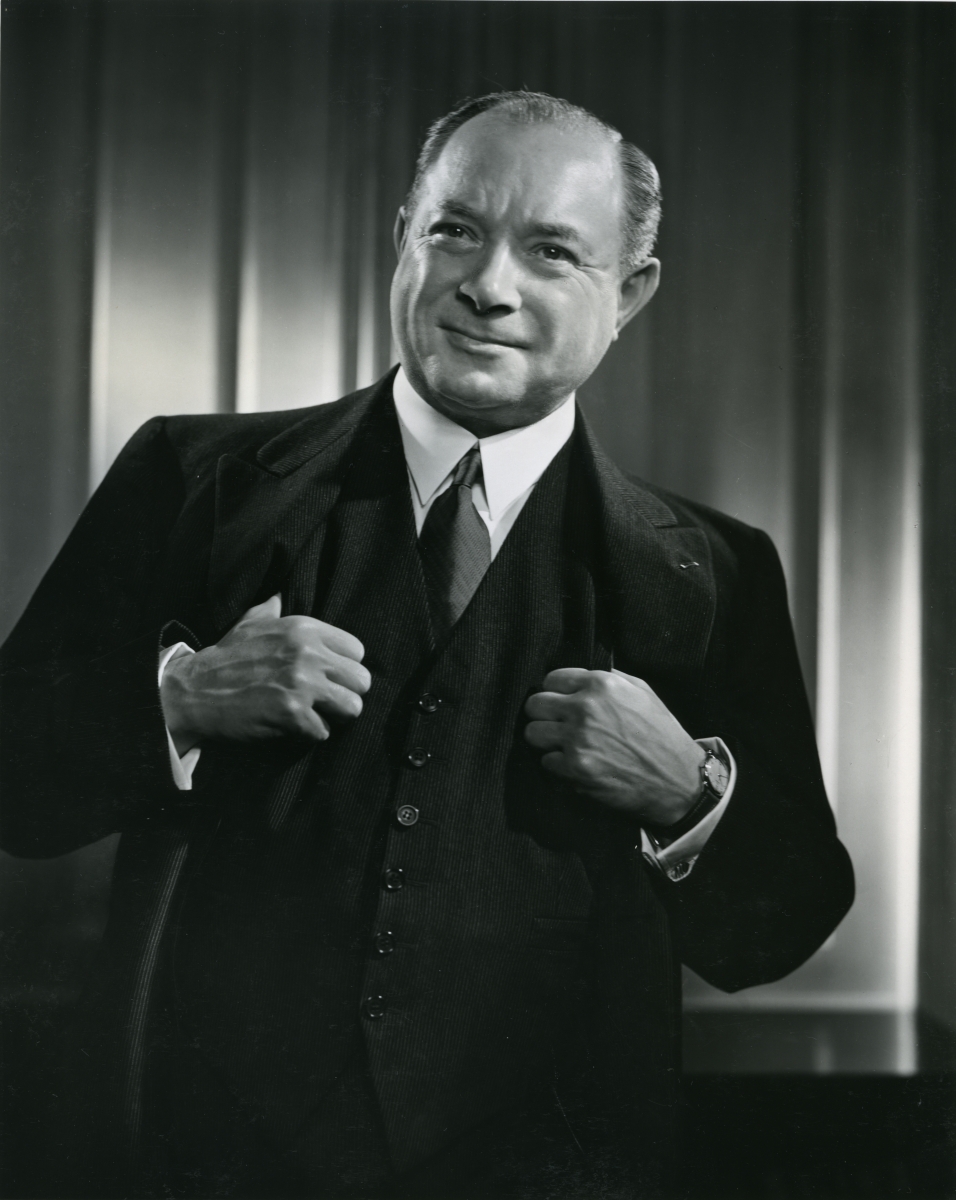 Portrait of David Sarnoff made by Yousuf Karsh in 1950.

When RCA started mass producing color televisions in 1954, it ran into an unexpected obstacle. Nobody wanted to buy them. This was the second controversy, which pitted a grimly determined Sarnoff against waves of criticism from the media, industry, and government. For six years, RCA was alone in manufacturing color televisions and each year it lost money on them. However, the corner was turned in 1960, when RCA, just barely, made a net profit on color. The next half decade was perhaps Sarnoff’s finest hour, as RCA made massive profits over a runaway demand for color televisions and competitors belatedly attempted to jump into the field.

Sarnoff’s triumph in color television was his last major contribution to the industry. During the 1950s, he had become increasingly focused on his role as a public figure. He had always been a prolific writer and speaker on communications and other science issues and now expanded his subject matter to include subjects as diverse as the Cold War, education, law, and religion. Sarnoff also began seeking out honorary degrees and other awards, eventually amassing dozens of the former and hundreds of the latter. In 1967, he established the David Sarnoff Library at RCA’s David Sarnoff Research Center in Princeton to house his writings, memorabilia, and awards. [The history of both the library and research center will be examined in future blog posts.] 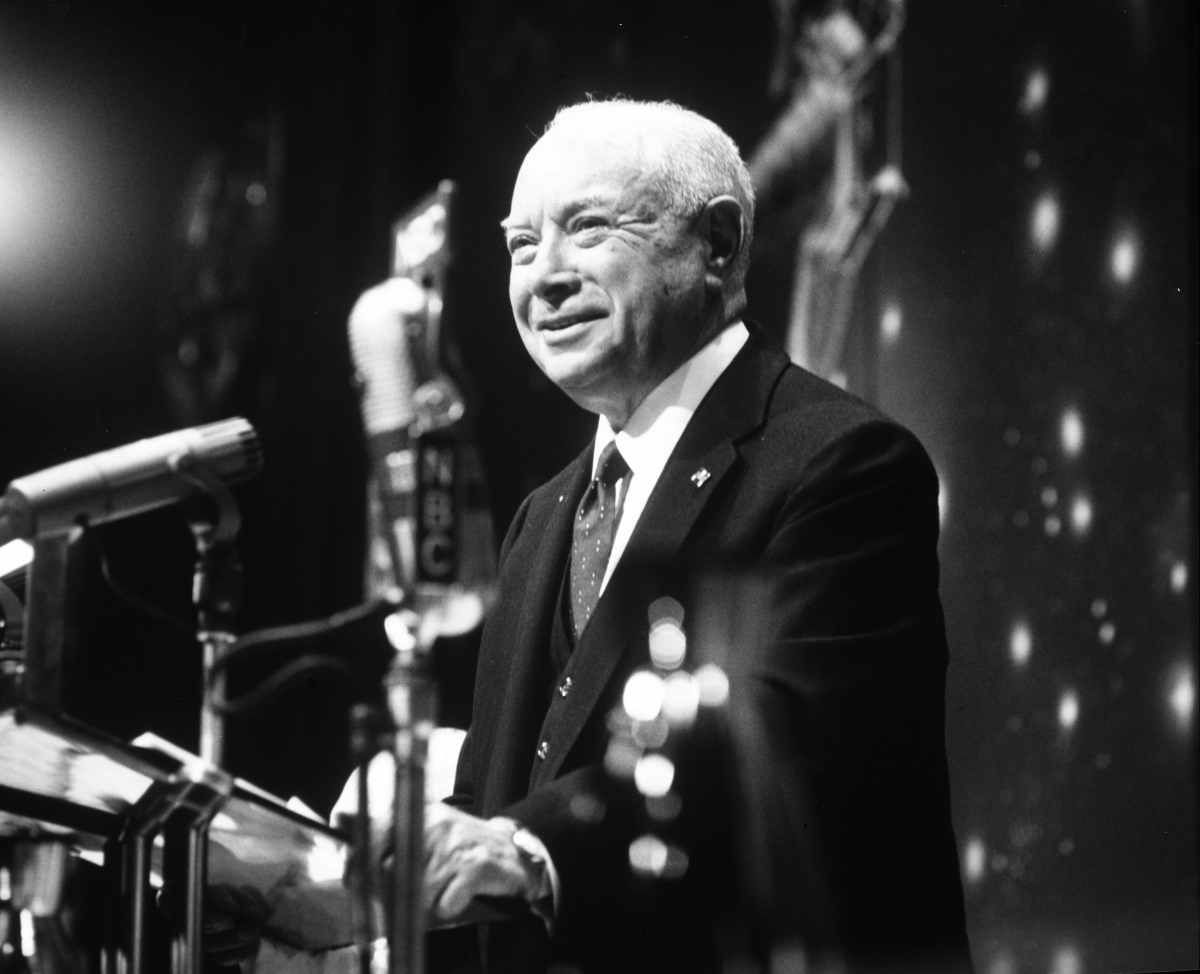 In 1966, he stepped down as CEO in favor of his son Robert W. Sarnoff, but remained actively involved in RCA’s affairs. A serious attack of shingles in 1968 essentially ended David Sarnoff’s career. Now bedridden, he continued to insist on regular briefings from RCA staff and refused to step down as chairman of the board until the end of 1969. Now honorary chairman, Sarnoff remained hospitalized until his death on December 12, 1971.

In more than sixty years of work in the communications industry, Sarnoff gained a reputation as a visionary and brilliant leader. Yet his rapid rise and obsession with publicity made him a controversial figure. RCA survived only fifteen years longer than Sarnoff and many veteran RCA employees firmly believed that had he led the company into the 1970s, RCA would have avoided its ignominious fate. In the end, on this and many other questions, it remains difficult to separate the man from the myth.

Out of a (not entirely successful) desire for brevity, this sketch of David Sarnoff’s life has focused on his career with RCA and left out many interesting details, some of which may be explored in future blog posts. For those interested in a more comprehensive biography, the best is The General: David Sarnoff and the Rise of the Communications Industry by Kenneth W. Bilby (New York: Harper & Row, 1985).