A few months ago, our household received an unsolicited catalog from Hammacher Schlemmer. The cover featured a $9,990 three-wheeled two-person electric roadster, which we don’t happen to need, so after leafing through the pages, I was about to toss it into the recycling bin. Something on the front cover piqued my interest, as I saw at the top of the page, “America’s Longest Running Catalog.” Since Hagley has an extensive collection of trade catalogs, I wanted to learn more about this company. 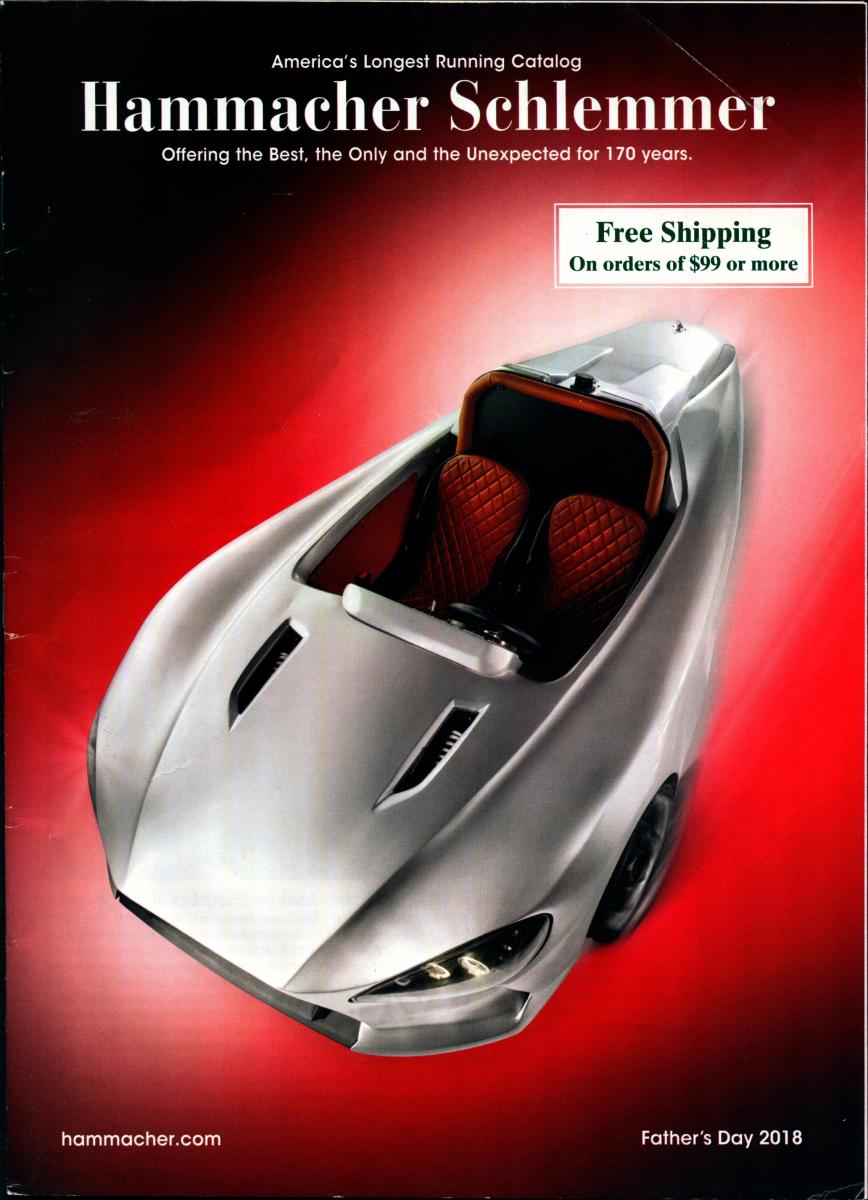 The hardware store that would eventually become known as Hammacher Schlemmer began in 1848 in the Bowery district of New York City. Proprietors Charles Tollner and R. Stern specialized in high-quality and hard-to-find tools and equipment.

In 1853, Tollner’s twelve-year-old nephew, William Schlemmer left Germany, and started working in the store. The business expanded in 1857, and moved to larger quarters. In 1859, family friend Albert Hammacher invested $5,000 in the company and the name was changed to C. Tollner and A. Hammacher.

As years passed, William Schlemmer rose through the company ranks. When Tollner died in 1867, 26-year-old Schlemmer entered into a partnership with Hammacher and Peter F. Taaks. As a result, the company changed its name to Hammacher & Co. Hammacher and Schlemmer then set out to reinvent their business, becoming one of the first national hardware stores.

The first known printing and distribution of the Hammacher Schlemmer catalog occurred in 1881. The hardcover book was used by the company's salesman as they crisscrossed the country taking orders from customers. The first printing was less than 500 copies. Apparently few copies of this catalog remain, but WorldCat lists copies at the New York Public Library and the Ohio History Center.

In 1896, Hammacher Schlemmer published a 403-page catalog featuring tools for all trades. The opening page stated, "Our tools are selected with great care and are of the best makes, and meritorious novelties will be, from time to time, added to our present line, our aim being to carry a complete stock of first-class tools."

In 1904, Hammacher Schlemmer moved uptown to a seven story building at 13th Street and Fourth Avenue, with 40,000 square feet of floor space. The wares were displayed on velvet cushions in oak display cases and the entire sixth floor was devoted to piano and organ parts.

In 1904, the U.S. Navy began using the company's catalog as an equipment manual, and it continued to be used until 1971.

In 1912, Hammacher Schlemmer printed its largest catalog to-date. Composed of 1,112 pages and taking a total of four years to compile, the catalog confirmed Hammacher as the most complete hardware source on the East Coast. A copy is housed in the Smithsonian's permanent collection.

In 1926 the firm moved again to an even larger space with twelve floors at their present location on East 57th Street.

As the company grew, the name Hammacher Schlemmer became synonymous with innovation. According to their website, they introduced the pop-up toaster (1930), the electric razor (1934) and the steam iron (1948). They also offered the first electric pencil sharpener, food processor, electric can opener and automatic coffee maker.

Other notable introductions include the first microwave oven (1968), telephone answering machine (1968) and cordless telephone (1975). The website says that these products were viewed by many as intriguing gadgets, but the company saw them as functional problem solvers.

Today, the company website says that Hammacher Schlemmer “continues to serve customers' needs in ways that no one else does or can. While some of the products may appear unusual, they all share the common goal of meeting the special needs of our many customers, just as a one-of-a-kind plumb bob did over a hundred years ago.”

Linda Gross is the Published Collections Reference Librarian at Hagley Museum and Library.