Back to the Future?

One of our latest library acquisitions is the Automobile Blue Book from 1916, specifically volume three, which covers New Jersey, Pennsylvania, Delaware, Maryland, and the Virginias. This is a fascinating resource from a bygone era that attempts to answer a driver’s needs all in one handy volume, at a time when driving itself was still a relatively new phenomenon. 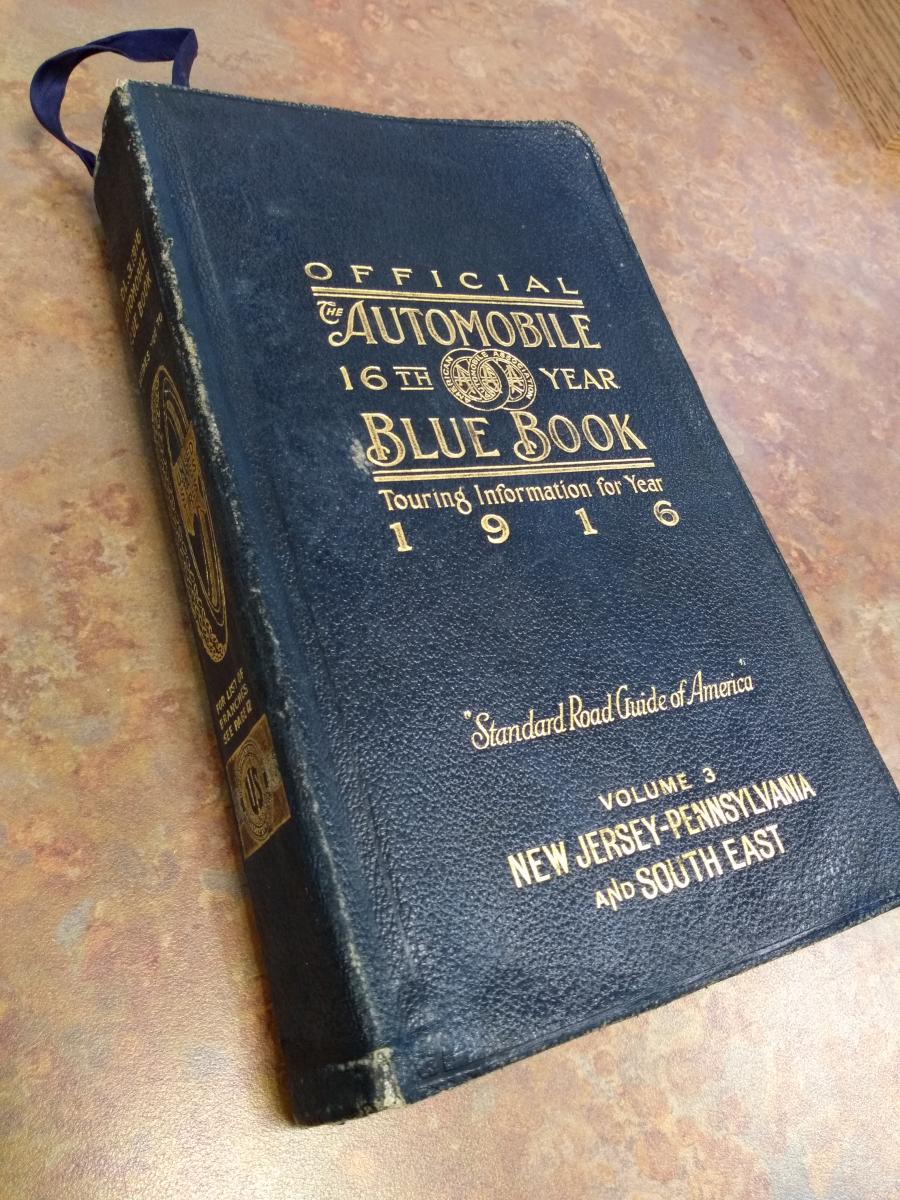 One hundred years on, it occurs to me that my children, born in the twenty-first century, would not have the slightest idea how to engage with this reference tool. I imagine their interaction might go something like this:

First, they might try talking to it. “Okay Blue Book!”

Then the suspicion might dawn that the book ran out of power. But closer inspection would reveal that there is no way to plug it in.

Finally they might realize that the object is, in fact, not digital and they have to physically engage with it.

Now this is a dense book with 1,060 pages, so I’m not sure my children would get past that initial shock. But if they plowed on, page 2 encourages the reader: “Before starting on a tour give ten minutes’ careful study to the following directions and your way will be made plain.” There are two hurdles in that statement: “ten minutes” and “careful study.” Moving on, the infographic spread across pages 8 and 9 is intended to help the reader make use of the book, but in this imagined situation it would only makes things worse: 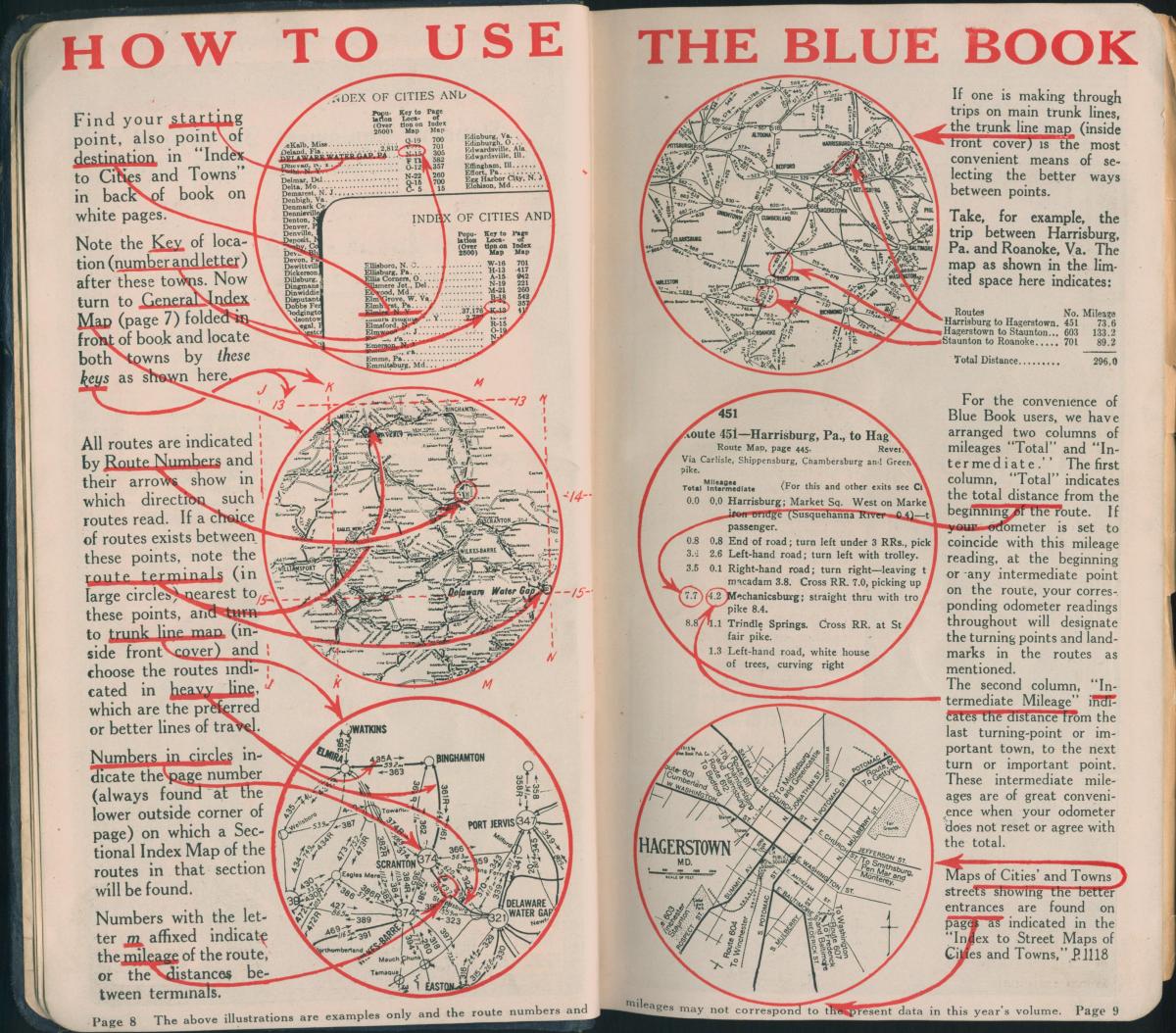 I imagine this is where my children would give up. Which is probably fair, since they can’t even drive yet.

But I don’t want to give up. These days I’m so used to Google Maps that the blue book instructions even gave me pause. But I decided to commit the suggested ten minutes in order to learn the best route from my house to Hagley Library. How would these directions compare to GPS today?

It turns out that Wilmington, DE is too close to Philadelphia, PA to provide a full test of the Blue Book. Directions and mileage calculations did not need to be spelled out. The reader could just consult the enclosed maps and plot out the trip very easily. 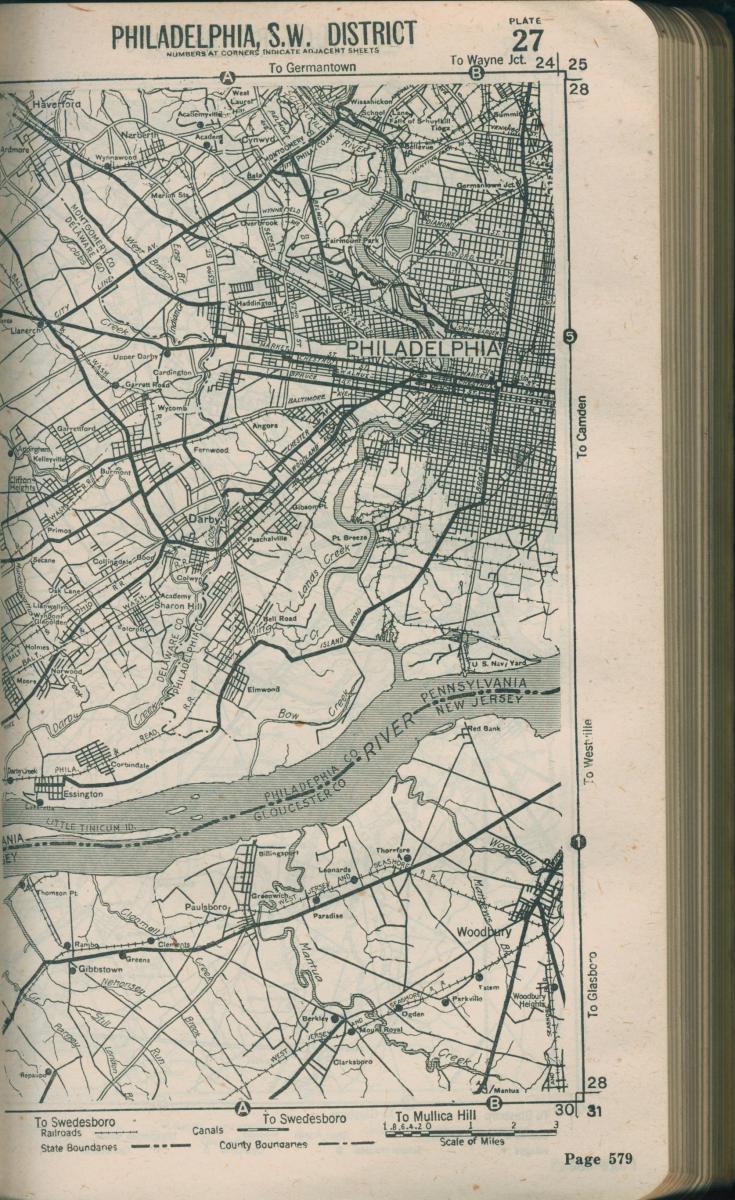 For context, a thirteen-mile stretch of my commute is detailed as part of a larger plan provided in the Blue Book for a trip from Philadelphia, PA to Baltimore, MD. This shows that my trip would have been slightly more complicated than I noted above. Landmarks such as toll booths, trolley lines, intersections, and R.R. crossings are all used and plotted to the tenth of a mile in order to help drivers navigate unfamiliar streets and get to their destinations safely. 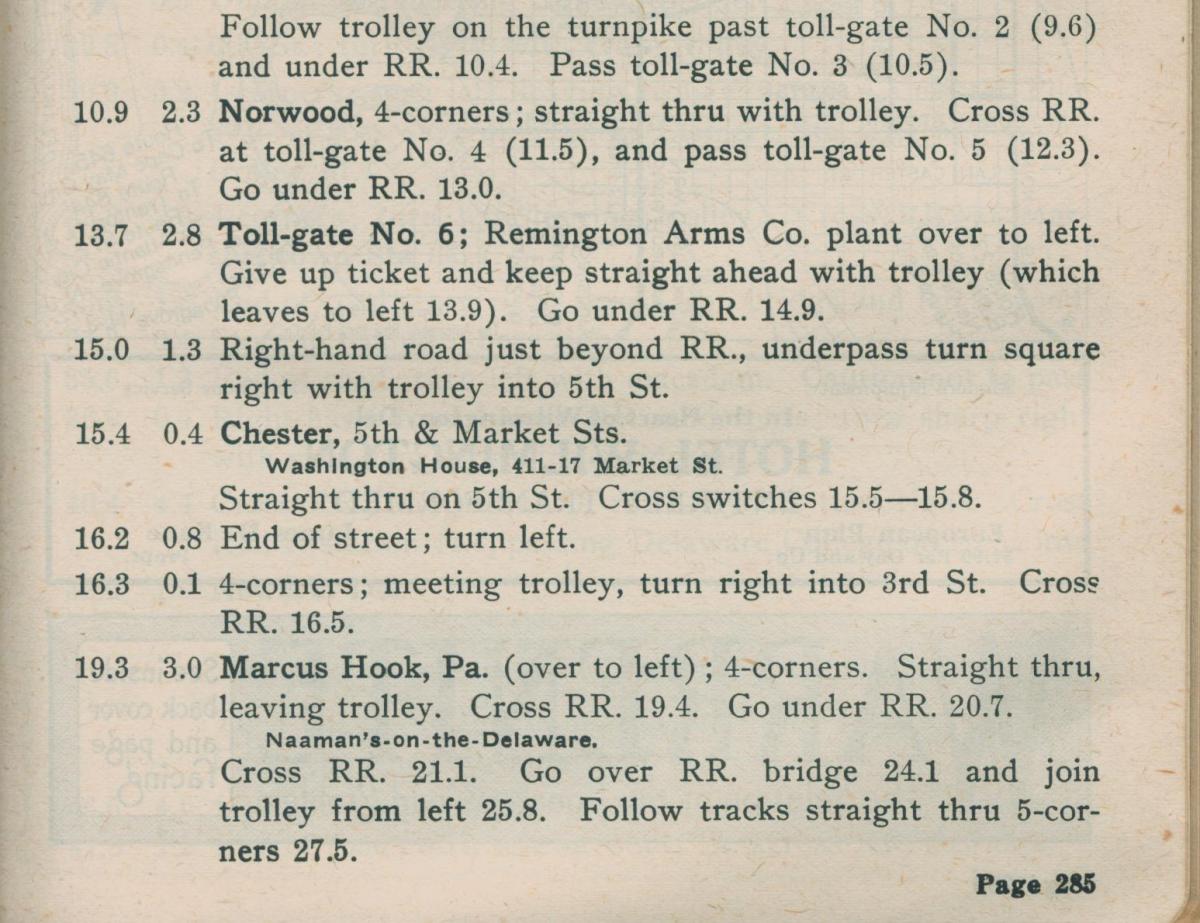 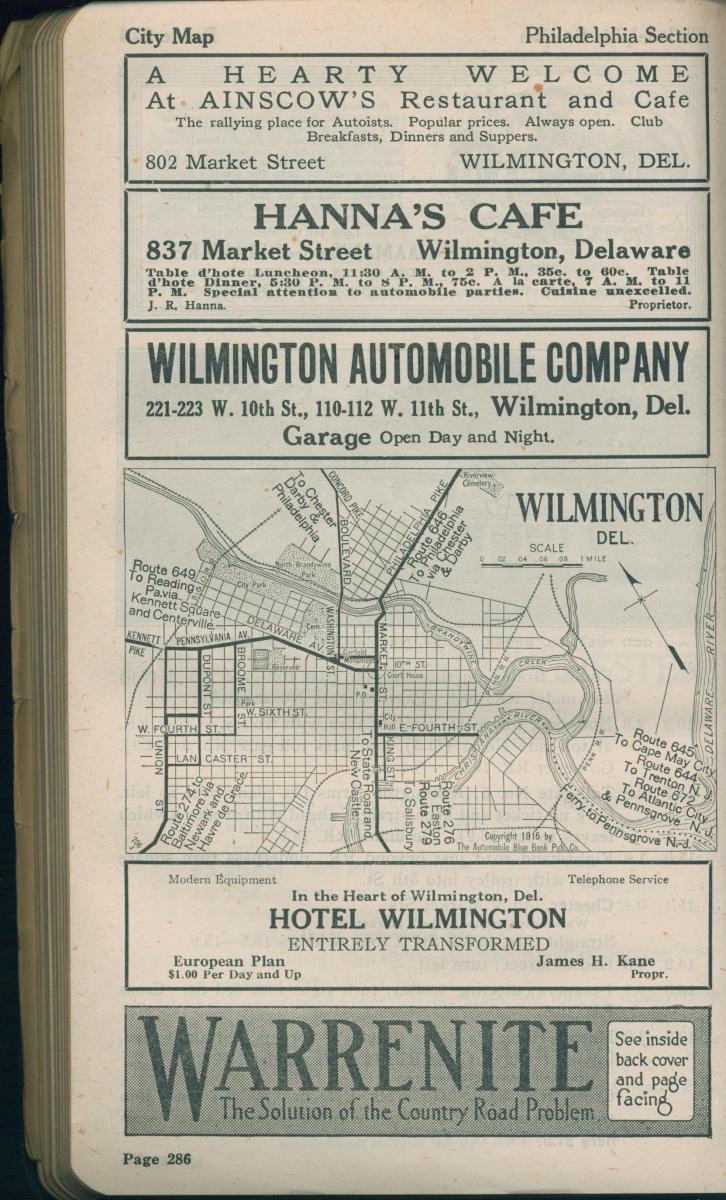 So I am happy to report that the Blue Book would still have gotten me to my destination. I would follow State Road (classified as merely a “good” road) South until I reach the town of Media, PA. From there, following only the “best auto roads,” I would take Providence Road South until I reach Chester, PA. Then I would take Philadelphia Pike South to Wilmington, DE. Finally I would take Kennett Pike North to Greenville, DE. I could follow this same route today, if I chose. In fact, the only improvements missing one hundred years ago were PA Route 476, Interstate 95, my house, my neighborhood, and Hagley Library.

As for the suggested time needed to learn how to use the book, it took me longer than ten minutes. But that’s because the Blue Book itself is a distracting artifact. You can find information and advertisements on tires, auto insurance, hotels, spark plugs, repair shops, gas stations, ferries, steamship docks, and abstracts of the local automobile laws recorded state by state. 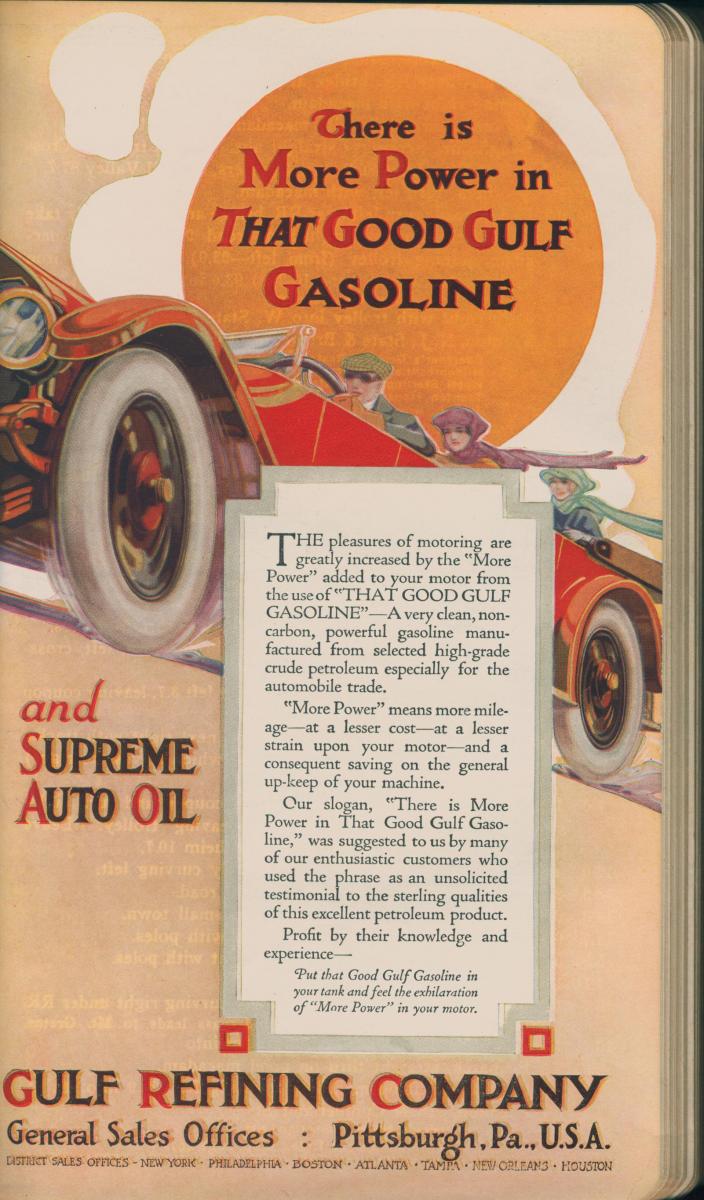 Yes, the Blue Book offered a one-stop resource for all of your driving needs...unless, of course, it didn’t meet your needs. Then you might use a Green Book, but that is another story recorded previously in Hagley’s newsletter.

Max Moeller is the Curator of Published Collections at Hagley Museum and Library.