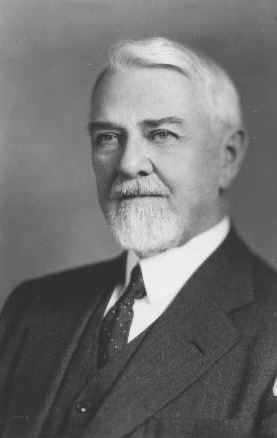 I came to Hagley on a grant to conduct research on my dissertation, “Tainted Money, Sanctified Wealth: The Business of Mission Movement Fundraising, 1865-1929.” Among my most interesting sources at Hagley were the papers of Charles Lukens Huston (1856-1951).

Throughout his adult life, Huston balanced his time between the church and the office. His business acumen helped the Lukens Steel Company in Coatesville, PA, expand and adapt while his deep religiosity promoted a conservative interpretation of Christianity. Huston aligned himself with the progenitors of fundamentalist Christianity and became particularly close with Cyrus Ingerson Scofield (1843-1921) near the end of the latter’s life. Through his best-selling reference Bible, Scofield popularized dispensationalism, a theological interpretation of history usually connected with the belief that Jesus would return in the near future. The correspondence between Scofield and Huston, part of which is contained in the Charles Lukens Huston Papers, documents intersections between the worlds of business and religion.

In 1918, Scofield and Huston jointly purchased a piece of property in Crescent City, Florida, northwest of Daytona Beach. In fact, “jointly” might be too strong of a word. Huston paid for it, though they made the plans together. Huston built a large house facing the street for himself and his family, which they rarely used, as well as a small bungalow on Crescent Lake for the aging Scofield and his wife, Hettie.

As one might expect from a leading figure in the fundamentalist movement, Scofield saw providence in this very mundane business affair. He “desire[d] nothing greater for [the bungalow] than the consecration of it all to [God].” He would use it as a place to write “such articles and books as the Lord is pressing upon me.” Some may have questioned the wisdom of investing resources to benefit individuals who were not long for this world, since the rapture or death would, they believed, soon take both men to heaven. Scofield had an answer for that too, telling Huston to “build something usable now and which may be of great use in the first century of the coming age [i.e. after the rapture]. We pre-mils [pre-millennialists, who believed Jesus could return at any time] forget often that there will be people in swarms left here when we go!”[1]

Crescent City hosted the annual Southfield conferences, a southern equivalent of Dwight Moody’s famous Northfield conferences. Scofield and Huston consciously built the property with a view toward expanding and improving the Southfield conference. Huston demanded a large parlor in the design of his house so conference attendees could congregate there. The Scofield house would provide comfort for the aging theologian during the hectic conference. Scofield was in the process of expanding the week-long conference into a one- or two-month “institute” and he hoped missionaries would stop there as they returned from the tropics. Seminary-taught missionaries, Scofield claimed, were “like most of our home pastors, ignorant of the BIBLE” and a two-month term at Southfield would provide systematic, Scofield-approved training.[2]

The Huston/Scofield correspondence shows how problematic it can be to differentiate between religious and secular life, particularly for the devout. Huston and Scofield, in planning their vacation homes, did not distinguish between theology, practical religious concerns, commerce, and construction.

Scott Libson is a graduate student at Emory University. He can be reached at scott.libson@emory.edu.