Since its earliest days, the Hagley Museum and Library has collected records on the iron and steel industry in America. One of the marks of the depth of that effort is that we have collections from not one person, but three people whose hobby was documenting early American iron furnaces. All three of these gentlemen lived in the first half of the twentieth century and compiled remarkable collections of photographs, field notes, clippings, and correspondence about colonial and early national blast furnaces in their spare time in the 1930s, 40s, and 50s. 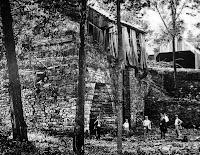 Clement Starr Brinton (1875-1963) was a U.S. Food and Drug Administration scientist. When he retired in 1944, he pursued an interest in the early iron and steel industries of Pennsylvania and New Jersey. He photographed abandon furnaces and related sites and gave lectures illustrated with lantern slides to community groups and schools. His collection came to the Longwood Library, precursor of the Hagley Museum and Library, as a gift in 1958. The photographs were transferred to the Pictorial Collections Department in 1970 (PC Accession 1970.199).

Albert T. Keller (1869–1940) was the chief of construction for U.S. Steel and then went to work for the Bethlehem Steel Company in 1930. He retired a few years later but went back to work as World War II approached, passing away soon thereafter. In his few years of retirement, he would take weekend and vacation trips to document ruins of early American iron furnaces. He also collected photographs from friends and business acquaintances from around the country of old (and not so old) iron and steel plants. His collection was purchased by the American Iron and Steel Institute (AISI) and then came to Hagley with the AISI’s archive in 1986 (PC Accession 86.268, Part II). A rich selection of images from the Keller collection is available in the Hagley Digital Archives. 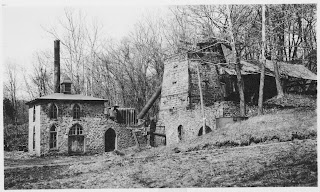 Walter C. Woodman (1903-1979) was a consulting mechanical engineer who lived in Watertown, Massachusetts. He was very interested in the iron industry of New England and was instrumental in working with AISI to restore the Saugus Iron Works and having it designated a national historic mechanical engineering landmark in 1975. His collection of three photo albums, two loose-leaf binders of clippings and notes, and a file on the Saugus dedication also came to Hagley with the AISI archive (PC Accession 86.268, Part IV.).

All three of the collections contain similar materials but cover different geographical areas. There are photographs of iron furnace ruins, auxiliary structures, including ironmaster homes, illustrations from early works on the iron industry and trade catalogs, sketch maps, and miscellaneous correspondence. Together they provide rich documentation of the beginnings of one of America’s greatest heavy industries, as well as providing a glimpse of the minds of collectors and history enthusiasts.

For more information about these collections, contact us at research@hagley.org

For more information about the Hagley Library, please visit www.hagley.org/library