The Hagley Library recently acquired two manuals, a technical drawing, a certificate, and souvenir photographs of New York City from Gary Wittie that, when combined with our existing holdings, tell a rather interesting story. Gary’s father, James Wittie, served as a sergeant in the army during World War II. Like many war veterans, James refused to speak of his combat experiences with his family. He did, however, speak fondly and repeatedly of the month he spent in New York, circa 1941, at the Sperry School.

Since its founding in 1910, the Sperry Gyroscope Company had long supplied the U.S. army and navy with sophisticated navigation and electronics equipment. Due to ongoing technological and scientific advances during the early to mid twentieth century, the military could not provide sufficient training for its enlisted men to make optimum use of the latest weapons and communication systems. As a result, manufacturers worked in tandem with the armed forces in order to produce both cutting-edge equipment and highly-trained soldiers to operate it. The Sperry Gyroscope Company began an informal system of Sperry Schools around 1934 and instituted a formal system of instruction to train military personnel in the use of its equipment in 1939. James Wittie was one of the beneficiaries, attending a four-week course at the Fire Control School located at the Sperry Gyroscope Company’s Brooklyn plant, where he learned to operate and maintain M-4 and M-7 Directors. 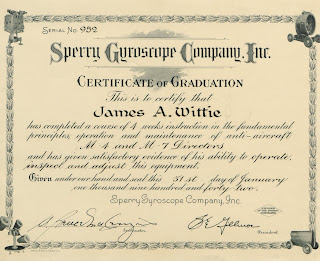 While anything but a vacation, a visit to the "Big Apple" must have been an exciting experience for a young man from Gatesville, Texas. Since his enlistment on March 9, 1939, it is known that James spent some time in the infantry in Oklahoma before serving with the 69th Coast Artillery in Camp Wallace, Texas. Not just any soldiers were selected for training at the Sperry Gyroscope Company’s Fire Control School in Brooklyn, however. Most attendees were graduates of the prestigious Coast Artillery School at Fort Monroe, Virginia, although wartime considerations did allow some other qualified soldiers to attend. For whatever reasons he was selected, James’ presence at Sperry’s Fire Control School indicates merit. And, according to his son, James was clearly proud of this achievement. Although the training was demanding, James must have found some time to take in the sights of the big city. At the very least, his miniature souvenir photos of prominent New York city sights and attractions indicate fond memories on his part.

So what are the M-4 and M-7 Directors?  Wittie’s Fire Control Instrument Theory and Director M4 manuals provide some clues, but they were written for a restricted and technically-proficient audience. Page one of the Director M4 manual reads: “Every precaution will be taken to see that this publication does not fall into unauthorized hands. No material appearing herein will be given out for publication, or will be used as a basis for any publicity, without the approval of the Secretary of War.” These were clearly sensitive materials that described the workings of state-of-the-art fire control systems for anti-aircraft weaponry in actual use by the US Army during World War II.

Further research indicates that Directors were essentially the mechanical brains of anti-aircraft weapons systems, using trigonometry based on observed data to calculate firing solutions for weapons looking to shoot down fast-moving targets in three-dimensional space (airplanes). This was a complicated mechanism to develop, manufacture, and use.

The M-4 Director was standardized by Sperry in 1939 and was in use until superseded by the M-7 Director in 1941. A bound volume from Hagley’s Sperry Gyroscope photograph collection provides insight into the work involved with developing and manufacturing what would be designated as the new M-7 Director. 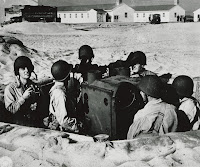 Additional photos from the collection document the use of the M-7 in training and combat situations. The M-7 Director required a squad of six operators, each responsible for specific tasks such as tracking the elevation and azimuth of aircraft using hand wheels and elbow telescopes; observing the range and altitude of enemy aircraft; timing the fuses for artillery detonation; and relaying calculations to artillery units. James could have served in any of these capacities during his active duty service with Battery C of the 325th Field Artillery Battalion, 84th Division. This unit eventually arrived in France via Omaha Beach following the D-Day invasion and served for the duration of hostilities in Europe.

James ultimately received the Bronze Star for carrying six wounded comrades out of a mine field during the Battle of the Bulge, a feat that is not taught in manuals. He survived the war and returned to West Texas to work in the oil fields and raise his family as a civilian, but since it now requires research to comprehend the technical nature of his war service, the Hagley Museum and Library is honored to accept these materials and to make Sergeant Wittie’s contribution known.

For additional information about these items and to set up an appointment to view them at the Hagley Library, please contact Max Moeller, Head of Imprints, at 302-658-2400 x226 or send email inquiries to Ask Hagley.

For more information about the Hagley Library, visit www.hagley.org/library