Conservation: A New Home for a Ruby Glass Ambrotype

Recently this ambrotype portrait of a member of the prominent 19th-century Wilson family of Wilmington was brought into the conservation lab. The specific identity of the man is a bit of a mystery, but we do know that the Wilsons owned the Wilson Line Steamship Co. and was somewhat of a local political dynasty (they produced two mayors of Wilmington). 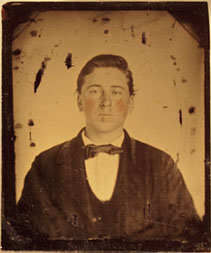 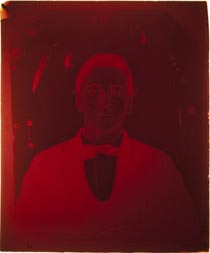 This small photograph measures only about 2x2 ½” and although it is in stable condition (it does not require any treatment), it does need proper storage and handling to reduce the risk of future damage. This picture is essentially a collodion glass plate negative. These images, called ambrotypes, were made by underexposing a negative to produce highlights of a milky beige tone. When backed with a dark material, the negative appeared as a positive. The majority of ambrotypes were produced by backing the glass with a coat of black varnish, or dark fabric. However, in the case of the Wilson portrait, the glass support provides the shadow tones by itself; it is ruby-colored glass. This is a good thing, since many painted glass artifacts suffer from flaking paint.

Another common finishing step of ambrotype production was to coat the exposed collodion with Canada balsam resin and seal it to a second piece of glass. This method protected the silver image layer from the discoloring effects of pollutants and prevented abrasion. Finally, the ambrotype portrait would have been installed in a protective velvet padded, hinged case. These types of cased photographs were conveniently portable and a way to carry around a personal image of a loved one. It was also a very effective method of protecting a one-of-a-kind image.

Unfortunately, the ambrotype in question has long since been separated from its cushy case. There is evidence that it once had a case with an oval-shaped brass mat, apparent in the ring of abrasions surrounding the sitter. The process of cementing the glass to a secondary cover glass never took place here, leaving the image susceptible to additional scratches and loss. It does not appear that the plate has a coat of varnish, but examination with a UV lamp could reveal this. On the plus side, the plate has not suffered any serious breaks, but for some minor chips at the corners. 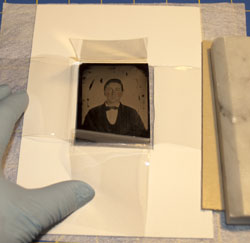 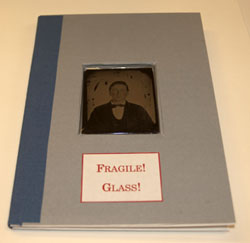 To provide protection and allow for a full viewing of this object, a window mat was made and the glass plate was encapsulated between polyester film and attached to the window mat with an acrylic adhesive paper tape.

Laura Wahl is the Library Conservator at Hagley Museum and Library.